More growth in Macau, more Asian markets opening soon, and even growth in Las Vegas are reasons why Citi group has a bullish outlook on global gaming in 2014. Recent earnings release support that they were right.

It has been over a month since Citigroup's Hong Kong-based research department reported its analysis of the global gaming market in 2014 at the beginning of the year. The bullish report, calling 2014 a "watershed year" for U.S. and Macau-based gaming stocks, gave reasons why growth and profits will not slow in 2014 and why investors should continue to be bullish on these companies long term.

Macau: growing, not slowing
Many analysts, including some at JPMorgan, have advised that growth in Macau will slow this year. Macau gaming had an amazing year in 2013, in which the Chinese government reported 18.6% revenue increases over 2012, up to $45.3 billion in total gaming revenue. However, these analysts think that the growth can't continue at this rate and have set their growth rate estimate at 17%. The result was a downgrade for gaming company MGM Resorts International (MGM -1.27%), which saw an immediate 2.4% drop in price. Las Vegas Sands (LVS -1.89%) dropped 1.9% based on this analysis that growth in Macau will slow as well.

Before JPMorgan's report and the publication of the 2013 growth news by the Chinese government, Citi analysts reported their more optimistic view. The research group has forecast a growth rate of 20% in Macau, higher than any other analysts. Here are the reasons that Macau has even more growth potential in 2014, according to the report.

A shift in focus from VIP players to mass-market gamers:

A VIP players room at the Galaxy Casino in Macau. Catering to these players has become  expensive. Photo: Business Insider.

For example, Wynn Resorts (WYNN -0.42%) won big this month when the company reported its 2013 year-end financial results. The company's fourth quarter profits increased by an astounding 92% year over year, led mainly by mass-market gaming growth in Macau. This segment of gamers in Macau increased 35% compared to VIP gaming which grew by 24%. Wynn is looking to continue this trend toward higher profits from the mass-market segment in hopes of continuing its strong growth in 2014 and beyond.

No new casinos to be completed in 2014:
This may seem like a strange reason to be bullish, but the idea is that a new megaresort has been finished in Macau each year since 2005. This means that profit has always been drained by development costs. Citi analysts said that between 20% and 70% of profit growth has been drained between 2009 and 2013 due to newly opened casinos. 2014 will be the first year in which the existing casinos can share all of the profit made this year, adding some cash to each company.

For instance, Las Vegas Sands has been building almost non-stop in the past few years, and is now working on its fourth property in Macau. Sands Cotai, the new property, is not going to open until mid-2015. MGM Resorts and Wynn Resorts are expected to open new properties the following year or two. 2014 will be a year where companies can focus on getting profit out of their current (very profitable) locations.

Don't discount Las Vegas yet
The report also includes reasons to be bullish on Las Vegas as a growing revenue stream for the global gaming market. According to Robert V. DiClemente, chief economist at Citi, macro-economics is directly related to the revenue potential of a gaming industry. Because unemployment continues declining in the U.S., which he expects will be less than 6% by late 2015, revenue in the U.S. should pick up. The report notes that this is due not only to gaming, but consumer spending associated with gaming as well. 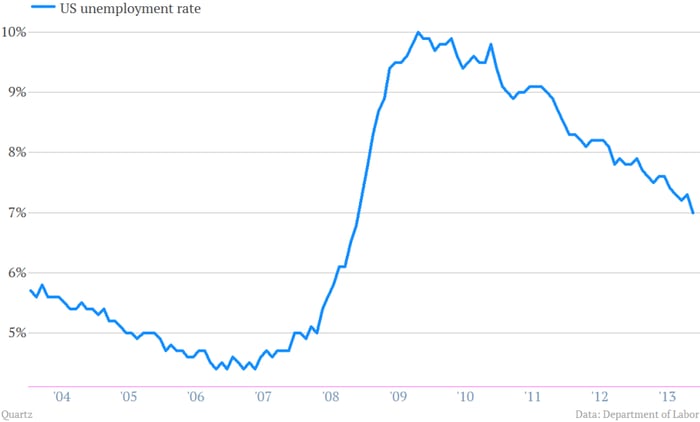 U.S. Unemployment continues to drop to its lowest point in five years.

DiClemente is bullish on the U.S. economy in general, saying that GDP is expected to grow 2.7% in 2014 and 3.1% in 2015. This would be a great sign for a companies like Wynn and MGM who still get the majority of their revenue from the U.S. market, unlike Las Vegas Sands.

Citi's top gaming stock for 2014
With the bullish report, Citi upgraded its rating on MGM and Wynn. However, there is one company that it has singled out as a top performer: Melco Crown (MLCO 5.56%). The analysts believe the investor community has not realized the company's importance in Macau, nor its international opportunities in other Asian markets such as Japan and the Philippines. Additionally, Studio City, Melco Crown's newest Macau property, is said by the Citi analysts to be the best located casino on the Cotai strip.

With high valuations, and growing Price to Earnings among the well known names such as Sands and Wynn, Melco Crown is still not the cheapest of the competitors. With a P/E multiple of 37, it is more expensive than Sands at 29, and Wynn at 31. However, Citi provides a 2015 estimate that would put Melco Crown trading at 12 times its EV/EBITDA multiple, which would be the lowest of the group according to their similar estimates.

Plenty of bullishness for global gaming left
Citi may have taken the most bullish view of any analysts on the street, but the numbers reported from these gaming companies in the fourth quarter 2013 and year end results proved that the analysts were looking in the right direction. Whether the growth going forward is 20% as these analysts predict, or the 17% that the "bearish" JPMorgan analysts predict, there is still incredible growth and profits to made in the gaming industry in 2014 and beyond. This means the gaming sector is definitely worth a closer look by Foolish investors.