Please ensure Javascript is enabled for purposes of website accessibility
Log In Help Join The Motley Fool
Free Article Join Over 1 Million Premium Members And Get More In-Depth Stock Guidance and Research
By Justin Loiseau - Feb 27, 2014 at 11:00AM

FirstEnergy Corp. just slashed its dividend -- is it headed for better times ahead?

FirstEnergy Corp. (FE -0.32%) reported earnings Tuesday, giving income investors a good long look at why their dividends just got slashed 35%. With similar dividend haircuts from Atlantic Power Corporation (AT) and Exelon Corporation (EXC -0.94%), can you count on FirstEnergy Corp. to ride the road to recovery? Here's what you need to know.

The numbers
For Q4 2013, FirstEnergy Corp. sent some mixed messages. On the top line, FirstEnergy Corp. didn't live up to expectations. The utility reported fourth-quarter revenue of $3.64 billion, well below analyst estimates of $4.28 billion.

The utility did, however, manage to make more from less. On the bottom line, FirstEnergy Corp.'s adjusted earnings per shares (EPS) came in at $0.75, a full $0.06 above estimates.

Looking back across the full fiscal 2013, President and CEO Anthony Alexander noted that his company's adjusted EPS of $3.04 was at the upper end of guidance, which he considers "solid results."

Not so fast
While Alexander can pat himself on the back for hitting estimates for 2013, FirstEnergy Corp. has a long uphill battle ahead of it. The company has hit hard financial times in the past few years as it suffered from lower power prices and an outdated generation system. To remedy this, Alexander notes that he took "a series of decisive decisions [...] to strengthen our financial position and reposition the company."

For income investors, those smooth words are a stark reminder of many shareholders' worse nightmare. FirstEnergy Corp. has ventured where few utilities dare go, cutting its Q1 dividend by 35% to help balance its books. 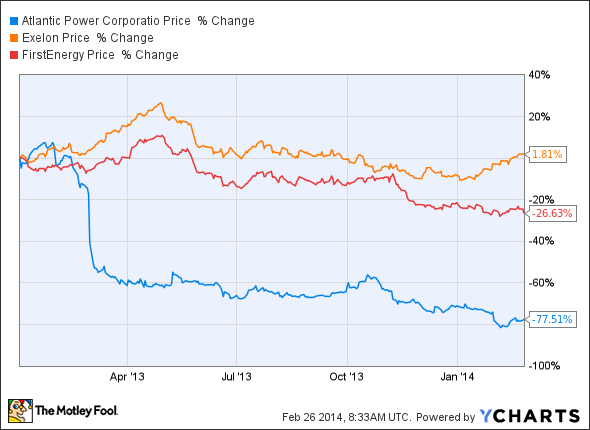 AT data by YCharts.

FirstEnergy's future
FirstEnergy Corp. isn't just padding its pockets with those diminished distributions. In his report, Alexander went on to note that FirstEnergy will "focus on more predictable and stable growth initiatives in our regulated businesses."

The utility plans to invest $4.2 billion into its transmission business over the next four years, in an attempt to snag "toll booth" revenue that is some of the steadiest and most lucrative money in the energy sector. But with 56% of its electricity generation still coming from coal, the company's fortune is continually tied to this fuel's fate.

FirstEnergy Corp's estimated range for fiscal 2014 doesn't touch its 2013 earnings and is even further behind 2012. The company is setting its sights low at just $2.45 to $2.85 per share, but investors need to look beyond next year. At current valuations, FirstEnergy's risky situation and unproven model don't add up. There are better stocks out there offering exceptional dividends -- something FirstEnergy can't promise at the moment.

Justin Loiseau has no position in any stocks mentioned. The Motley Fool recommends Exelon. Try any of our Foolish newsletter services free for 30 days. We Fools may not all hold the same opinions, but we all believe that considering a diverse range of insights makes us better investors. The Motley Fool has a disclosure policy.