Exelon stock is up for 2014, but the nuclear company still has natural gas, wind, and clean coal enemies ahead.

Exelon(EXC -1.06%) is off to a roaring start for 2014. After falling significantly at the end of April of last year, Exelon stock is already up 11% this year. But as the biggest nuclear user around, Exelon still has plenty of enemies. Here are the utility's three worst nightmares. 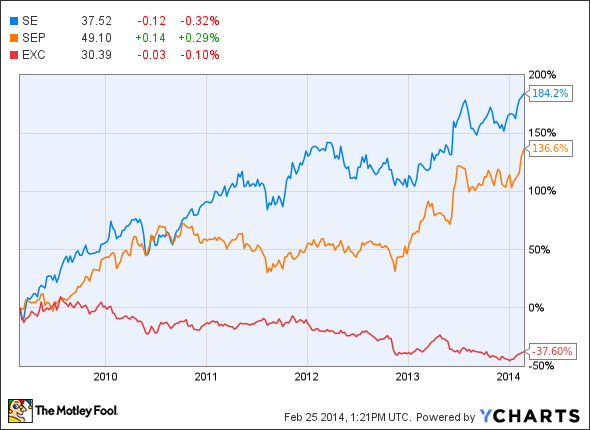 Nuclear has been put in a tough spot here, too. Whhen Entergy (ETR -2.77%) announced that it would close its 604-megawatt Vermont Yankee nuclear plant, the forward basis swap for natural gas prices shot up 7% for the month the plant will breathe its last breath, showing how easily investors can switch sides to natural gas.

Spectra Energy and Spectra Energy Partners both exceeded expectations on their latest quarterly earnings, and recently received full approval to partner with NextEra Energy (NEE -0.09%) to install Florida's third major natural gas pipeline at a cost of $3 billion. With a whopping $25 billion in near- to midterm growth projects lined up, booming natural gas infrastructure at competitive prices is a nuclear nightmare.

Over in the Midwest, wind power is blowing in trouble for Exelon stock. Despite owning 44 wind projects totaling 1,300 megawatts of capacity, Exelon  has opposed production tax credits that wind-centric utilities such as NextEra Energy have been fighting for all along. Wind is booming in the region, where NextEra Energy is pushing out wind power from facilities across Iowa and the Dakotas.

Exelon is competing in many of the same markets as wind, and the double trouble of cheap natural gas and government-supported wind energy has pushed electricity prices down 40% since 2008.

Since the Obama administration announced a series of new air emissions standards, utilities have been closing coal plants left and right to exit before the 2016 deadline lays down steep fines for noncompliance. From 2012 to 2016, utilities have already reported 40,000 megawatts of retired coal capacity, with government estimates predicting actual closures closer to 60,000 MW.

But some companies are holding out, pushing for "clean coal" facilities that could keep this fuel within the lines of the Environmental Protection Agency's new standards. Southern (SO -1.96%) has poured the most money into the initiative, shelling out more than $5 billion to get its 582-megawatt Kemper County, Miss., facility up and running.

The project is 65% over budget and construction continues to be delayed, but Southern is determined to bring coal back from the brink. This is understandable, considering that natural gas profit clocks in at $3.04 per megawatt-hour, compared to $31.58 for coal, according to Bloomberg estimates. While the Department of Energy estimates that clean coal is twice as expensive as conventional coal, the numbers could still keep profit well above what Exelon could hope to nab from nuclear.

Justin Loiseau has no position in any stocks mentioned. The Motley Fool recommends Exelon, Southern Company, and Spectra Energy. Try any of our Foolish newsletter services free for 30 days. We Fools may not all hold the same opinions, but we all believe that considering a diverse range of insights makes us better investors. The Motley Fool has a disclosure policy.