Based on the bombshell news that dropped this quarter, the results from Spectra Energy (NYSE:SE) don't seem as important as what the future may hold if it combines forces with Enbridge (NYSE:ENB) and becomes a larger entity, as it said it would this past quarter. Still, it's at least worth taking a look at the company's results for the quarter to see if Spectra will be hobbling into the merger with weak performance, or striding along. Here's a quick look at the results from this past quarter, and what it means in relation to the pending merger.

With regard to Spectra Energy's earnings results, you always have to keep in mind that parts of it are a seasonal business, especially its natural gas distribution assets in Canada, as most of that distribution goes to residential and commercial customers who use gas for home heating. Even though the company's 0.71 distribution-coverage ratio is saying that it isn't covering all of its payout with quarterly generated cash, strong results from the first quarter still put the company on track to end the year with a distribution-coverage ratio of 1.3.

An encouraging sign is that the company's field-services business started to turn a profit. This part of the business is comprised almost entirely of its ownership of DCP Midstream and its subsidiary partnership DCP Midstream Partners (NYSE:DCP). From an operational perspective, it was able to lower is gathering and processing costs to $0.35 per gallon of processed natural gas liquids (NGLs) as it said it would do. 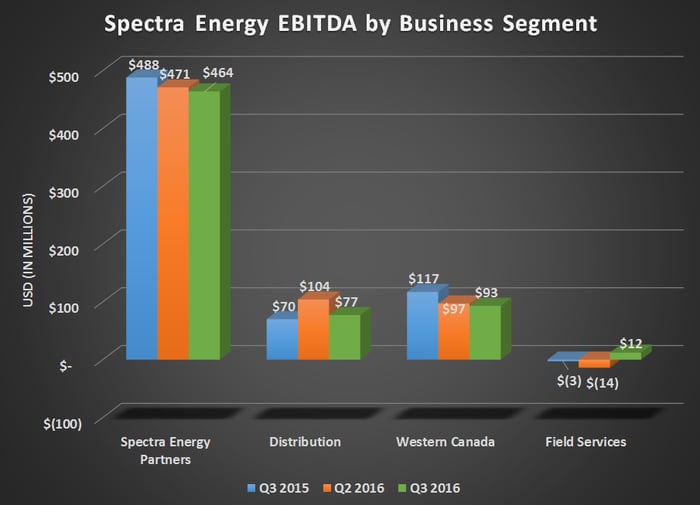 What happened with Spectra Energy this quarter?

The big news that trumps just about everything else was the announcement that Spectra Energy and Enbridge would merge in a $29 billion deal. The combined company will have an absolutely enormous asset footprint that, when combined, integrates rather well together. The combination of the two will help connect some of the disparate parts of each company's pipeline networks. 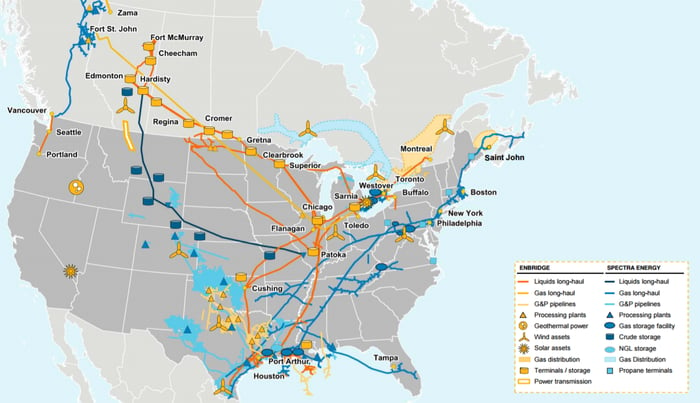 According to management of the two companies, this will be a tax-deferred transaction for Spectra Energy shareholders, but the thing that's the most interesting is the combined company's long-term plans. Management expects the deal to lead to 10%-12% annual dividend growth all the way out to 2024 once the growth portfolios of the two companies are consolidated. From Spectra's perspective, it also gives the company a more diversified business with crude oil pipelines and a pretty large portfolio of utility-scale power-generation assets.

From an operations standpoint, the quarter was pretty much a "steady as she goes" kind of quarter. The company completed all of the projects it planned to bring into service this year, which should help boost earnings a bit for the fourth quarter and shore up any cash-flow weaknesses. At the same time, it didn't bring any projects under review to a final investment decision, which we can all imagine was caused by the merger talks and how the combined company wants to allocate capital.

With so much in the air with the merger underway, CEO Greg Ebel kept his comments on the quarter about operational execution with just a small hint that the merger process is going as planned.

We have a track record of delivering projects on time and on budget, and we have built on that reputation with projects we placed into service in the third quarter and those scheduled to be in service in the fourth quarter. This is a testament to our execution model, our team, and the strategic value of being able to build upon our existing asset footprint. These expansion projects and the reliable, affordable energy they will supply across North America will serve customers and investors for decades to come. We are equally pleased with the fact that DCP Midstream has already achieved its $0.35 NGL break-even target.

As we progress toward completing our proposed merger with Enbridge, we remain highly confident in the strategic value of the combination and the ability of the 'new' Enbridge to deliver on the benefits that we outlined for investors when we announced the transaction in September.

Spectra Energy did a respectable job this quarter operations-wise. It was especially encouraging to see its DCP Midstream assets become profitable again as this has been a sore spot on earnings for some time now.

In the long run, though, this doesn't matter nearly as much as the merger talks between Enbridge and Spectra Energy. The plan that came out with the original announcement certainly makes the deal look attractive, but there are some questions as to how the two entities will deal with their subsidiary partnerships.

Investors should be on the lookout for a more detailed plan on how the company will be structured post-merger -- that is, if the merger gets full shareholder and regulatory approval. The way this company will be set up will be a large determinant of its success in the future.

Spectra Energy's Earnings Were Solid, but Investors Are More Interested in What It Does Next @themotleyfool #stocks $SE $ENB $DCP $SEP Next Article
Current