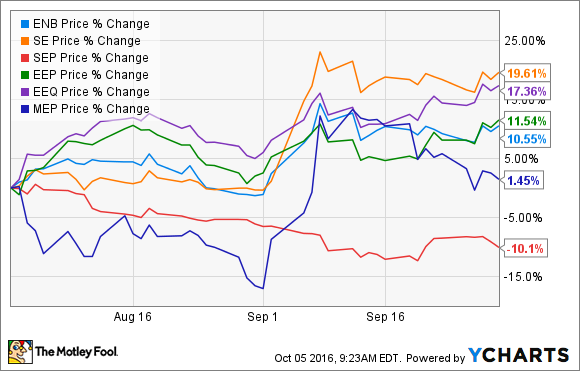 The overall market reaction to the announcement that Enbridge and Spectra Energy were going to merge was positive. For Enbridge, it gave the company a big injection of diversity away from being just an oil transporter to an oil and gas infrastructure superpower in North America without having to load up on debt to make a purchase. For Spectra Energy, the offer price was very attractive and the combined size of the two entities should help make access to capital easier. All of these things are relative positives and there is reason to believe that, in the long term, this will be a good move for the two companies.

Despite this, there is still some apprehension from investors in Spectra Energy Partners because of uncertainty as to how all of these various subsidiaries will be structured. On the one hand, the combined parent organization would make access to capital easier and less expensive to attain. On the other hand, the parent organization will now need to allocate capital to four separate entities that have projects in the works, not to mention the projects that the parent organization owns itself. Trying to divvy up capital to all these different places could slow Spectra Energy Partners growth rate as it may have to table some future projects for a later date.

Then, there is the issue with some of the lesser performing subsidiaries and how they are dealt with. On Enbridge's most recent earnings conference call, the company has said that it is looking at "strategic alternatives" for Midcoast Energy Partners, which is a veiled way of saying it wants to dispose of the entity. Spectra Energy has its own problem child with DCP Midstream. As recently as last year it and the co-owner/operator Phillips 66 had to inject DCP with cash and assets to keep it afloat. What the new entity decides to do with these two is still up in the air.

It's hard to judge exactly how this newly formed company will perform. There are some clear advantages it will gain from becoming a single company, but some of the questions of how it decides to allocate capital to its subsidiaries is a question that may take a long time to get a feel for the answer. If you are looking for more certainty in this plethora of investments, then shares of the parent companies look to have the clearest picture going forward. Until we get some more definitive answers on how Spectra Energy Partners or the other subsidiaries will be treated under this new corporate structure, there's no need to rush to line up and buy shares.