Please ensure Javascript is enabled for purposes of website accessibility
Log In Help Join The Motley Fool
Free Article Join Over 1 Million Premium Members And Get More In-Depth Stock Guidance and Research
By Justin Loiseau - Feb 27, 2014 at 11:26AM

Initial jobless claims increased 4.2% to 348,000 for the week ending Feb. 22, according to a Labor Department report released today.

After falling a revised 1.5% the previous week, this newest report dashed analyst projections that new claims would hover around 335,000 claims. Economists said that winter storms two weeks ago may have caused some people to delay submitting their applications until this week, temporarily boosting the figures. 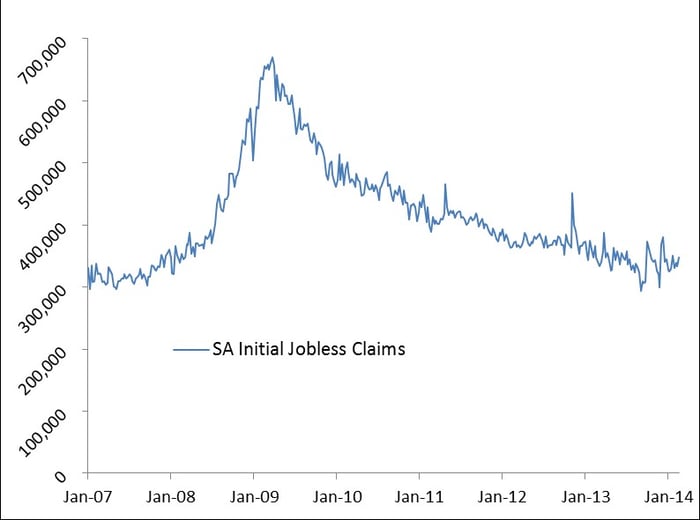 From a more long-term perspective, however, the four-week moving average flatlined at 338,250 initial claims, suggesting that the labor market isn't making any major moves. Both the latest week's claims and the four-week average fall significantly below 400,000, a cutoff point that economists consider a sign of an improving labor market.

On a state-by-state basis, 16 states recorded a decrease of more than 1,000 initial claims for the week ending Feb. 15 (most recent available data). Georgia made the largest improvements (-7,760), citing fewer manufacturing and construction layoffs as the main reason for the dip.