One of the biggest banks has taken a beating in the media lately, but its consumers are showing with their wallets the bank's business is still booming.

JPMorgan Chase (NYSE:JPM) had a disastrous 2013. It was linked directly to Bernie Madoff, questions arose surrounding its hiring practices in China, and it reached a monumental $13 billion settlement from its mortgage practices. As a result, its net income fell by 16% on the year to $17.9 billion.

This was all while peers Bank of America (NYSE:BAC) and Citigroup (NYSE:C) -- which were the key examples for litigation issues and poor performance during the financial crisis -- saw a truly great year in 2013, as they saw profits rose by leaps and bounds thanks to improved business performance, fewer settlements, and lower losses: 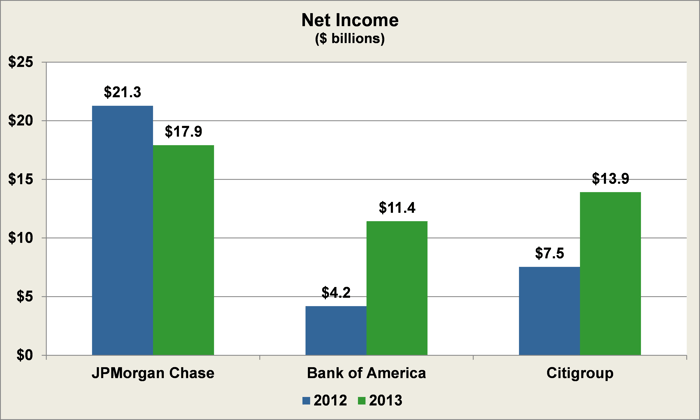 This has created a blemish on the record of Jamie Dimon, and caused many to question whether JPMorgan Chase should be considered as an investment. However, there is also no denying its core businesses performed quite well -- net income rose by 2.5% excluding the corporate line item -- and it turns out its largest business has one key opportunity for remarkably profitable growth.

The key business inside a business
When many people think of JPMorgan Chase, the first thought is often visions of grandiose investment bankers roaming the streets of New York City making deals worth hundreds of millions.

However, 45% of its core net income came from its Consumer and Community Banking, or CBB, business, versus 41% at Bank of America and 42% at Citigroup. Although it has a major presence in investment, corporate, and commercial banking, lending to small businesses and individuals is a greater driver of income for JPMorgan Chase than many believe.

And while its CBB line of business encompasses a variety of different segments, the Card Services business is the most intriguing and perhaps the greatest driver of profit moving forward.

Last year the CBB delivered a return on equity of 26%, yet its card services operations had a staggering 34% ROE. Card Services opened more than 7.3 million new accounts (up from 6.7 million last year) and saw its total sales volume rise 10% to $420 billion. Perhaps even most remarkable was the growth of the pre-tax income for the business, which rose 33% to $5.3 billion as a result of fewer charge-offs and expenses.

Yet perhaps even more remarkable is how well JPMorgan Chase performed against other peers, such as the aforementioned Bank of America and Citigroup, but also credit card giants American Express (NYSE:AXP) and Capital One (NYSE:COF). It was able to clearly outpace them in sales volume growth and also maintain its hold on the No. 2 spot in total credit card spending volume: 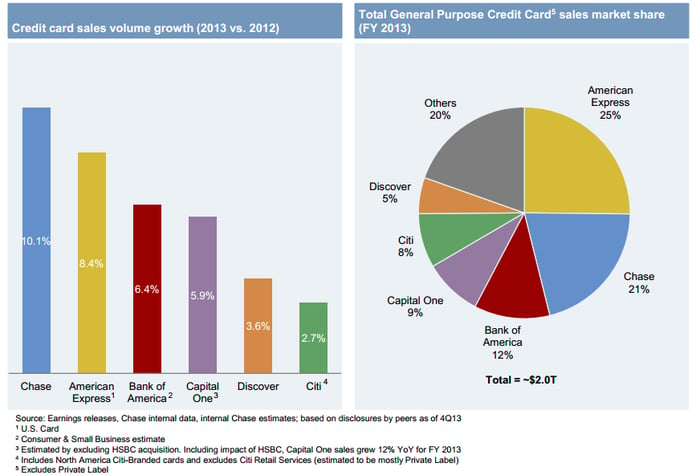 In addition to aggregate growth, what was also striking was JPMorgan Chase's commanding grip on the market share of affluent customers -- those with more than $125,000 in annual income or $250,000 in total assets -- which are often the most profitable and pose the least amount of risk:

The credit card business for JPMorgan Chase is a distinct bright spot, and while it delivered impressive growth in 2013, it appears it is clearly in position to do so for years to come.

The Foolish bottom line
Understanding a bank with more than $2.4 trillion in assets goes beyond the success of just one business, but in the case of JPMorgan Chase, the success of its credit card business is both remarkable and noteworthy, and something any prospective investor should always keep in mind.