The IoT is coming. Will Zebra Technologies hold its own or be trampled by bigger players?

The Internet of Things, or IoT, is gaining more attention each year. It is a buzzword seen in a variety of publications from marketing hype to academic research papers. So what is the IoT? The answer you get depends on who you ask.  According to Dr. Elgar Fleisch of Postscapes.com, "The basic idea of the IOT is that virtually every physical thing in this world can also become a computer that is connected to the Internet."

How can investors benefit from the IoT? The answer lies deeper into the technology.

Underlying Technology
The technology behind the IoT is complex, so to get things "talking" to each other, each device must first be able to "speak." Sensors and Microelectromechanical Systems, or MEMS, are two technologies that can give a thing its voice. Sensors indicate the state of an object, and MEMS are tiny machines with electrical connectors that can perform some action. Devices speak the language of data, but for this data to be useful it must be heard. Networking technologies such as Wi-Fi, LAN, Bluetooth, gigabit ethernet, and many others carry this data to other sensors or computers.

Why should investors be interested in these talking machines? The IoT is predicted to grow to a phenomenal size in just a few years. In 2011, Cisco (CSCO -1.40%) released a white paper regarding the future of the IoT:

Looking to the future, Cisco IBSG predicts there will be 25 billion devices connected to the Internet by 2015 and 50 billion by 2020. It is important to note that these estimates do not take into account rapid advances in Internet or device technology; the numbers presented are based on what is known to be true today

That is a lot of devices, which also represent a lot of market value. In another white paper, Cisco predicted that this market will be worth $14.4 trillion dollars. Cisco is already a big player in this market, continually producing faster, smaller, and cheaper wireless communication devices.

Google (GOOGL -2.75%) is also entering the IoT market. It recently purchased Nest Systems, a company that developed an intelligent thermostat and smoke detector. These devices are sensors that are part of the smart home revolution. Google is also interested in the data produced by IoT devices, and it hopes to pool the data for analysis.

Zebra Technologies
Where does Zebra Technologies (ZBRA -4.03%) fit into this picture? Zebra produces barcode and radio-frequency identification, or RFID, technology. Barcodes revolutionized the way goods are tracked, and RFID has taken this technology to the next level. Where barcodes must be individually scanned, an RFID reader only needs to be in the general vicinity of the tag. In some cases, multiple RFID tags can be read at once. Zebra produces the hardware, software, and supplies needed to create and program barcodes and RFID tags.

Looking at the 2013 financials, the company looks quite robust. Net sales grew 12.4% and all product and service categories reported strong sales. The company produced $175 million in free cash flow and earnings grew $0.82 per share. For the first time ever, sales broke the $1 billion mark. While this looks solid, there may still be some concerns. 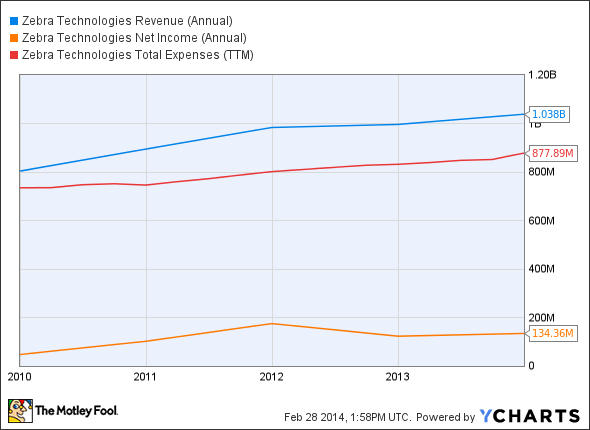 According to the chart, total expenses are growing at a slightly faster rate than revenue. This is impacting the the net income. Ideally, revenue should increase faster than expenses.

Zebra is in an exciting market that is growing fast. If the company can control costs and continue to improve revenue, it will become a company worth considering. For the moment, however, put this stock on hold until improvements are made. There are better investment opportunities in the IoT at the moment.

Why DocuSign Stock Crushed the Market This Week