Most investors overlook Microsoft in discussions about fitness bands and fitness apps. However, Microsoft could still come back and surprise us all.

In a previous article, I discussed Microsoft's (MSFT -0.59%) surprising opportunities in health care, which could boost sales of its Windows 8.1 operating system and Surface tablets.

Whereas those sales could be lifted by EHR (electronic health records) software used in hospitals, a lot of the current buzz about the health care market today centers on mobile health products, such as personal fitness apps for Apple (AAPL -2.12%) iOS and Google (GOOGL -0.90%) Android, and personal fitness bands from Nike (NKE 1.23%) and Jawbone.

The market for wearable smart bands is projected to grow 350% year over year in 2014 to 8 million units shipped worldwide, then continue surging to 45 million by 2017, according to Canalys. In addition, Research and Markets expects the market for mobile fitness apps to grow at a compound annual growth rate of 61% to $26 billion between 2013 and 2017.

Unfortunately, Microsoft doesn't get much attention when it comes to wearable fitness devices or apps, even though many leading fitness bands like Fitbit Flex and Adidas' miCoach devices are compatible with Windows Phones. That's likely because of three factors:

Better late than never
Yet that doesn't mean Microsoft has given up on the mobile health market.

Microsoft recently released its Bing Health & Fitness Windows Phone app, an all-in-one personal fitness solution that allows users to set their daily calorie goal, record what they eat, and access nutritional information for over 300,000 foods. It also features workout and exercise tutorials, a GPS tracker to record activities and calories burned, and the ability to check information on possible health problems with its Interactive Symptom Checker. 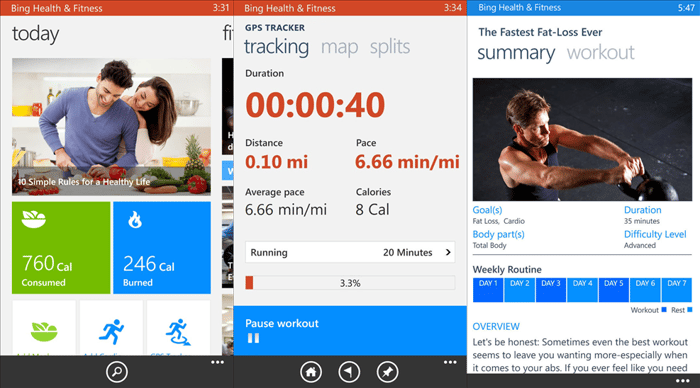 In other words, it ties together some features of the most popular fitness apps on the market, such as MyFitnessPal and Fitbit, and synchronizes the data to a user's Microsoft account.

At the time of this writing, the app had a rating of 4.5 out of 5 stars from 280 reviewers. Many users praised the app's ability to synchronize with a Windows 8.1 PC, its user-friendly interface, and its extensive fitness content. Other users, however, criticized its lack of a barcode scanner (now standard in many fitness apps) and its lack of wireless connectivity with existing fitness bands.

The need for compatible wearables
That last point highlights a key problem for Microsoft -- how can it convince fitness band manufacturers to integrate their products with Bing Health & Fitness when the companies are already dependent on their own mobile apps?

For example, a key aspect of Nike's strategy with the FuelBand is the "gamification" of fitness via social connections. Users can compete against their friends via Nike's social network, share their results on Facebook, and win video game-like "achievements" for hitting certain fitness milestones. Other companies, like Jawbone and Fitbit, have emulated Nike's social fitness recipe for success. 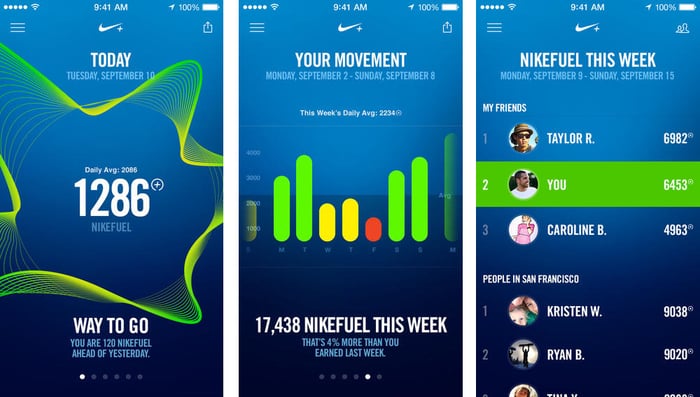 There's simply no incentive for these companies to integrate their networks into Bing Health & Fitness, since it diminishes the importance of their own apps.

The main problem is that Microsoft doesn't control the market for operating systems in smartphones as it does in desktop PCs. In my previous article on EHRs, we saw that leading EHR companies like Allscripts, Epic, and Greenway were willing to integrate their mobile apps into Microsoft's HealthVault EHR network. They were willing to do so for two reasons: the desktop version of the EHR software was already installed on Windows software, and Microsoft's cloud data storage capabilities were more robust than their own.

However, if Microsoft forges an alliance with one of the smaller fitness band companies or makes Nokia (NYSE: NOK)-branded fitness bands of its own, it could add a hardware counterpart to Bing Health & Fitness.

Don't count Windows Phone out yet
What Microsoft needs most right now is to grow its market share in smartphones. If it accomplishes that, fitness band and fitness app makers will naturally flock to the platform.

That growth might come sooner than expected, according to the latest sales forecasts from IDC. IDC predicts \ Microsoft will claim 3.9% of the global smartphone market in 2014, and continue expanding to a 7% share by 2018. This means its overall growth will considerably outpace Android, iOS, and Blackberry devices with 29.5% year-over-year growth.

That kind of growth will be hard for hardware and software makers to ignore -- and will inevitably lead to a larger number of compatible fitness bands and apps for Windows Phone devices.

It's all about the ecosystem
To my mind, Microsoft's biggest smartphone weakness right now is its ecosystem of apps.

For Microsoft, the answer is Bing. Bing Fitness & Health, along with Bing Travel and Bing Food & Drink will be added to the existing Bing apps (Bing News, Bing Finance, Bing Weather, and Bing Sports) to strengthen Microsoft's ecosystem. The idea is simple -- make users depend on these apps on a daily basis, and the market share for Windows Phone will naturally grow.

The Foolish takeaway
In conclusion, Microsoft's presence in fitness apps will play a crucial part in its mobile growth strategy.

If apps like Bing Fitness & Health can increase the daily use of its Bing apps, then the company's growing ecosystem could lead to market share gains. That, in turn, could lead to more attention from leading wearable fitness device makers -- leading to a positive feedback loop that would help Windows Phone achieve IDC's optimistic growth projections.