A revision estimating less personal spending than previously thought brings the number down.

This second estimate number roughly represents the economic growth in the U.S. from the third quarter to the fourth quarter. The fourth quarter's first estimate clocked in at 3.2%, but analysts had already expected a downturn to 2.5%. A key reason for the downgrade from the first estimate to this one was that consumer spending is now estimated to have expanded at a 2.6% annual rate, below the initial estimate of 3.3% though still the strongest quarterly spending by consumers in nearly two years. 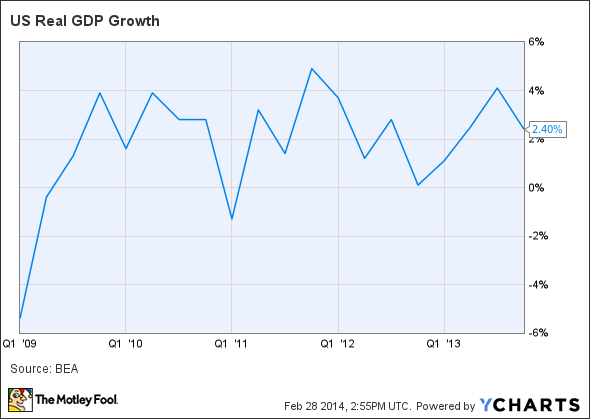 Federal spending, residential fixed investment, and state and local spending all shrunk from Q3 to Q4, while private inventory investment growth slowed down. Imports, which are subtracted from total GDP, increased.

This latest report also publishes inflation numbers via the GDP Price Index. Inflation increased at a seasonally adjusted annualized rate of 1.6%, up from a previous 1.3% estimate and above analyst expectations of the same.

While this second estimate is still based on incomplete data, the third and final report for Q4 numbers is scheduled to be published on March 27.