Is California in the clear?

Two years ago, California's water reservoirs ended 2015 in such a sorry state that locals worried it would take 20 inches of new rainfall just "to get to normal" levels in their reservoirs. Fast-forward to 2017, however, and experts exulted at the "deluge of winter rain" that has turned the Californian landscape lush once again. As of today, extreme drought has been quenched throughout the state. Less than 13% of California currently suffers from even "moderate" levels of drought ("D1," the second lowest level of drought conditions). Even November's record heatwave in Southern California wasn't bad enough to tip even one of the state's counties into the more severe drought conditions D2, D3, or D4.

Things are certainly looking up for the Golden State. And yet, if one good year has California in the clear, it stands to reason that one more bad year could put California right back where it began -- in the dustbowl. 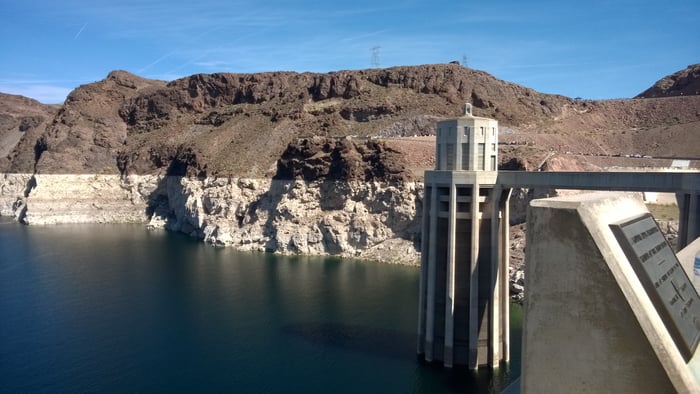 And this matters to me... why?

Meteorologists say California's recently ended drought was the worst the state had seen in 500 years. If you live in the state, this was painfully obvious. But in case you live outside, here's a quick rundown of why California's drought is important to you: More than half the fruit and vegetables sold in America are grown in California's Central Valley. California grows 99% of our pistachios and almonds, and 96% of our tomatoes. Lemons: 89%. Carrots: 86%. Lettuce: 49%. And that's just the start of the grocery list.

With 88% of California experiencing "severe to exceptional" drought conditions during the drought, and 100% of the state "exceptionally dry," these fruits and veggies became harder -- and more expensive -- to produce. California produced $44.7 billion worth of fresh produce in 2013. One year later, $1.5 billion of that had withered on the vine. Experts estimate that the state incurred $2.7 billion in economic losses in 2015, and despite the respite in 2016, lost another $600 million that year.

Faced with a fickle Mother Nature, playing hot and cold about whether it will grace California with water, but sitting right next door to a huge bowl of water, aka the Pacific Ocean, many Californians wonder whether desalination could provide a more reliable answer to their problems.

Desalination is the process of taking ocean salt water and forcing it through a membrane to filter out salts through reverse osmosis -- thereby creating fresh water. It's hardly a new technology, yet only a handful of desalination plants operate in California today -- mostly for private use by industrial companies such as Pacific Gas & Electric. At least 15 new plants are at various stages of planning, though -- and therein lies the opportunity for investors.

We're from Israel, and we're here to help

In late 2015, one of the biggest of these desalination plants, the $1 billion, 50 million-gallon-per-day Carlsbad Desalination Project, finally came on line. Built by privately held Poseidon Resources, in partnership with Israel Chemicals (NASDAQOTH: ISCHY) subsidiary IDE Technologies, Carlsbad is designed to produce enough water to supply 7% of the city of San Diego's drinking water needs.

As of today,, Carlsbad is the largest such plant operating in the Western Hemisphere. Should all the other desalination plants be built to similar scale, this would produce enough water to take a city the size of San Diego (population 1.41 million) out of the loop, releasing its water needs for use in irrigation.

Help a bit closer to home

Bring in the big guns

Another company with even more financial heft could also come to California's aid -- France's Veolia Environnement (OTC:VEOEY). The self-proclaimed "global leader in desalination," Veolia boasts "more than 100 years of experience ... implement[ing] desalination strategies" and says it's helping 51 countries around the globe get the salt out of their water. These projects include plants in the United Arab Emirates and Oman, Iraq's largest desalination plant, located in Basra, and a new plant in Kuwait.

Meanwhile, defense industry giant Lockheed Martin (NYSE:LMT) says it has developed an entirely new technology for desalination that's capable of filtering water "at a fraction of the cost of industry-standard reverse osmosis systems."

Which is the best investment?

Everything depends on whether California decides to act to solve its drought problem by leveraging its position by the Pacific into an inexhaustible supply of clean water through desalination. For now, Israel Chemicals is the clearest winner from this crisis and positioned to parlay its success in Carlsbad into additional projects elsewhere in the state.

Further out though, Veolia could certainly play a role in building California's desalination infrastructure. The biggest opportunity of all would be if a smallish company like Consolidated Water decided to get in the game. At Carlsbad, project managers aim to produce about 50 million gallons of water a day -- which equates to 153 acre-feet of water for irrigation. San Diego has contracted to pay $2,000 per acre-foot for water from the Carlsbad plant, and that should work out to about $307,000 per day in revenues for a Carlsbad-size facility -- or $112 million annually.

By way of comparison, according to S&P Global Matket Intelligence, all of the revenues Consolidated Water generated over the past 12 months, from all of its water plants combined, was barely half that amount-- just $61.6 million. One single contract from California would triple the size of its business.

That is, it could, if California gets serious about fixing its drought problem permanently. For now, that's the biggest "if" of all.