"These are the times that try men's souls. The summer soldier and the sunshine patriot will, in this crisis, shrink from the service of their country; but he that stands by it now, deserves the love and thanks of man and woman."

Quoting Thomas Paine's The American Crisis may be a touch melodramatic, but, shareholders of Clean Energy Fuels (NASDAQ:CLNE), Chart Industries (NYSE:GTLS), and Westport Innovations (NASDAQ:WPRT) are surely finding these quite trying times. Over the past several months, analysts at both Piper Jaffray and Dougherty & Co. have issued notes and downgrades on Clean Energy, and a series of articles -- published by anonymous authors -- have claimed LNG for trucking will be a tiny part of the whole. Since early October, investors have been destroyed: 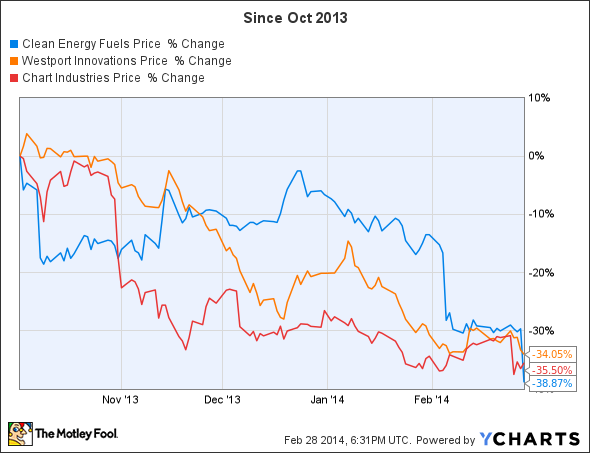 With all three companies' future being tied to natural gas vehicles, is it time to hang on, or move on?

UPS is one of the few shippers to adopt natural gas in a big way so far. Source: UPS.

What just happened?
The market has been watching one big thing that affects all three of these companies: Truckers. Specifically, the adoption of natural gas as a fuel for the big trucks, called Class 8 trucks, that move most of the goods we buy, and consume some 25 billion gallons of diesel annually. There are between 2 million and 3 million Class 8 trucks in North America. The transition to natural gas offers the shipping industry the potential -- at a discount of $1 per gallon -- to save billions of dollars, all while using a fuel that's nearly 100% domestically sourced and produces significantly less tailpipe emissions than diesel.

Earnings clues
Westport's earnings release on the 26th came across as a bit mixed. Revenue at joint ventures CWI and WWI -- which don't show up on Westport's top line -- grew 50% and 70% last year, but this was overshadowed by Westport's direct sales growing a paltry 5%. The thing is, those two joint ventures, which Westport owns 50% and 35% of respectively, generate huge sales numbers. Westport's direct revenue in 2013 was $164 million, versus $777 million at the JVs. The JVs contributed $13.7 million in profits to Westport in 2013.

Digging a little beneath the surface of Westport's direct sales gives us some clues to the future. The small growth was largely due to its Applied Technologies segment -- which at $93 million in sales in a big chunk of the total -- being flat. On-Road Systems, however, grew 47% in 2013, to $55 million. Considering that this is the business unit where its iCE PACK LNG tanks, and WiNG System it sells on the Ford F Series pickup, plus the Volvo products (which will include a 13 liter engine for class 8 trucks in 2014), and it's not hard to imagine this unit growing sales just as much in 2014.

Clean Energy's earnings call on the 27th was similarly mixed. Full-year revenue was up -- but only 5% -- while revenue in the fourth quarter was down 14%. The thing is, Clean Energy's business is comprised of primarily two things: Building and maintaining public and private stations, and selling fuel.

The result of these two things is lumpy revenue, which the market -- in its infinite focus on the short term -- often misinterprets as bad news. Because the stations that Clean Energy builds can cost tens of millions of dollars, one large customer can lead to a massive lump in revenue from one period to the next. The result? It makes it look like the refueling business appear to be declining, when it's not. Clean Energy Fuels delivered 10% more CNG, RNG, and yes, even LNG, than in 2013 than 2012.

Speaking of LNG
This is the crux of the "problem" for Chart Industries, Clean Energy, and Westport. A handful of questionable -- in accuracy and intent -- articles recently published have made claim that LNG would not play a large role in the trucking industry, and what has looked on the surface like limited adoption of LNG, has compounded this impression. Chart Industries CEO Sam Thomas had this to say:

We continue to see increased end user demand for LNG as a replacement for diesel fuel in transportation and oilfield applications globally. While a majority of the transportation growth has been in Asia, we are seeing demand increase domestically as well, but at a somewhat slower pace than the market anticipated. While we are aware of the recent delays in the adoption of LNG in the over the road trucking industry, we feel customers are still committed to the long-term viability and benefits associated with LNG.

Chart Industries is a more diversified company, with exposure to multiple industries, but LNG for transportation is expected to be a big source of growth.

Westport CEO David Demers made a similar statement on the earnings call, and Andrew Littlefair of Clean Energy went so far as to hold a conference call that largely dealt with the mix of class 8 trucks featuring LNG versus CNG. All three companies stand to lose to some degree if LNG isn't a significant portion of the fuel for trucking, so it stands to reason that all three would have positive statements around the future. But with that said, it's just not very likely that this many companies could be getting it wrong.

Final thoughts: hanging on can be hard
It can. As a shareholder in two of these three companies, I get it. However, this is one of those times when you have to find your internal Warren Buffett, and focus on the business -- not the ticker -- despite the painful losses. The evidence strongly supports 2014 being a major point of inflection for natural gas in trucking. Will the stocks go lower? In the short-term, it's possible. But more importantly, the stage is set for wide-scale adoption by truckers. Momentum is building. This isn't the time to walk away.