After reporting fiscal fourth-quarter earnings, Home Depot (NYSE:HD) saw its shares soar 4% to close at $80.98. At this price, the company is currently trading at a 2% discount to its 52-week high. Taking this into consideration, should the Foolish investor think about cashing in on his or her gains, or is there still room to run for the home-improvement giant?

Home Depot's quarter was better than expected but far from ideal!
For the quarter, Home Depot reported revenue of $17.7 billion. This represents a 3% decline compared to the $18.2 billion the company reported in the year-ago quarter and a slight shortfall compared to the $17.9 billion Mr. Market anticipated. At first glance, this appears bad, but when you consider that $1.2 billion of sales that were reported in the fourth quarter last year were attributed to an extra week of operation compared to this year's quarter, Home Depot actually grew 4%.

In terms of profitability, Home Depot did even better. For the quarter, the company saw its earnings per share come in at $0.73, $0.02 above what analysts forecast and 7% higher than the $0.68 that management reported in the year-ago quarter. In part, this jump in profitability was due to a decline in the company's cost of goods sold from 65.1% of sales to 65% and an even further drop in its selling, general, and administrative expenses, which fell from 23.1% of sales to 22.7%.

However, the largest contributor to the rising profits for the business was the number of shares outstanding. Over the past year, Home Depot reduced its shares outstanding by 7%, which proved very helpful in making the company's 0.8% decline in net income look good.

But how does Home Depot look compared to the competition?
From 2009 through 2012, Home Depot has seen a respectable 13% rise in revenue from $66.2 billion to $74.8 billion. While this may not sound great over a four-year time frame, it almost doubled the 7% growth reported by Lowe's (NYSE:LOW). During this four-year period, Lowe's reported that its top line grew from $47.2 billion to $50.2 billion. 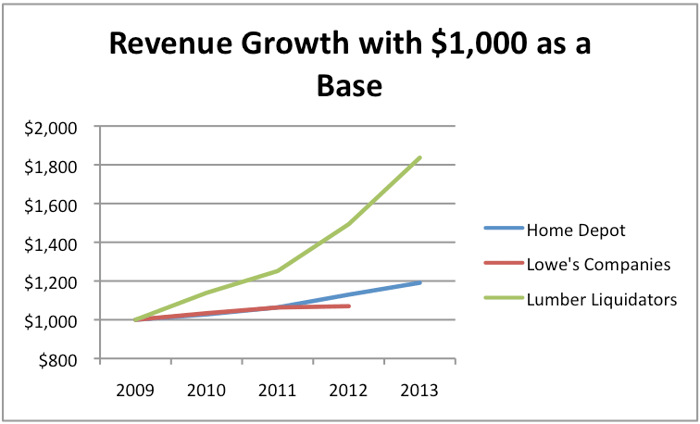 Probably the only company in this space to significantly outpace Home Depot's growth was rival Lumber Liquidators (NYSE:LL). Over the past four years, the company saw it revenue soar 49% from $544.6 million to $813.3 million. For its 2013 fiscal year, revenue popped 23% to $1 billion.

In all fairness, Home Depot's market capitalization is about 38 times that of Lumber Liquidators and its revenue is nearly 79 times greater, so the smaller rival should be growing more rapidly just because of the size difference.

More likely than not, though, the greater growth experienced by Lumber Liquidators should come at the cost of depressed profits for the reason that its small size shouldn't have the same operating efficiencies and market presence that Home Depot possesses. Interestingly, this doesn't appear to be the case. While the company's revenue has grown rapidly, its net income rose by 75% from $26.9 million to $47.1 million. For fiscal 2013, the company's revenue increase was accompanied by a 64% jump in profits to $77.4 million. 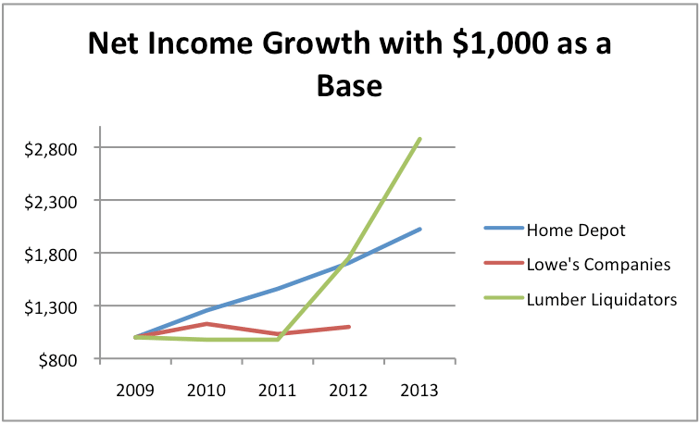 Fortunately, Home Depot has managed to post some attractive bottom-line growth of its own. Over the past five years, the world's largest home-improvement company saw its net income rise 102% from $2.7 billion to $5.4 billion. Just as in the case of Lumber Liquidators, this rise in profits stems from higher revenue combined with greater cost efficiencies.

Meanwhile, Lowe's has continued to struggle. If you thought the company's revenue growth was bad, then its profit increase won't come across as much better. During the past four years, the company's net income rose only 10% from $1.8 billion to $2 billion. Despite seeing its selling, general, and administrative expenses decline from 24.9% of sales to 24.2%, the company's net income has been negatively affected by rising interest expenses and an inflated cost of goods sold.

Foolish takeaway
Based on Home Depot's performance this past quarter, shareholders got a glimpse into how the largest player in the industry has been doing lately. This look into the business ensured investors that the company is alive and well and that its future looks very bright. This is especially true when you compare its long-term performance against Lowe's, which has lagged in both revenue and net income growth.

Moving forward, it's difficult to tell whether or not this trend will continue, but Home Depot looks to be in a good position for the Foolish investor. However, for those who would like to jump into a smaller company with greater growth prospects and an attractive record, Lumber Liquidators might not be a bad prospect. On top of growing its top line faster than its peers, the company has done so while increasing its bottom line considerably.