Please ensure Javascript is enabled for purposes of website accessibility
Free Article Join Over 1 Million Premium Members And Get More In-Depth Stock Guidance and Research
By Ted Cooper - Mar 1, 2014 at 8:15AM

Philip Morris shipped 6.5% fewer cigarettes to European retailers in 2013 than it did in 2012. Meanwhile, its rivals have leading market shares in the beneficiary categories, such as roll-your-own and cigarillos. Is there any hope in Europe for Philip Morris?

Cigarette smoking is on the decline in Western nations, and there is nothing tobacco companies can do about it. Of particular concern to Philip Morris International ( PM 1.08% ) is the sharp drop-off in cigarette volume in the European Union, where the company derives 31% of its operating income.

Slow economic growth and high unemployment are accelerating European consumers' flight from cigarettes into other tobacco categories. This has created a mad rush by Philip Morris, British American Tobacco ( BTI 0.21% ), Imperial Tobacco (NASDAQOTH: ITYBF), and Japan Tobacco ( JAPAF -0.96% )to capture as many priced-out customers as possible.

Products benefiting from the decline in cigarette volume
According to an industry-sponsored study, European Union cigarette sales declined from 793.7 billion sticks in 2000 to 608.8 billion sticks in 2010 -- a 23% reduction in one decade. Excise taxes -- sometimes exceeding 60% of the price of a cigarette -- and a lackluster economy drove smokers into other categories.

The categories that have benefited the most are roll-your-own, cigarillos, and the black market. These categories are taxed at much lower levels than cigarettes, making them attractive to price-conscious consumers. The difference in price can be huge; the tax on a carton of Marlboro cigarettes is more than five times that of the roll-your-own, also called fine cut, variety. 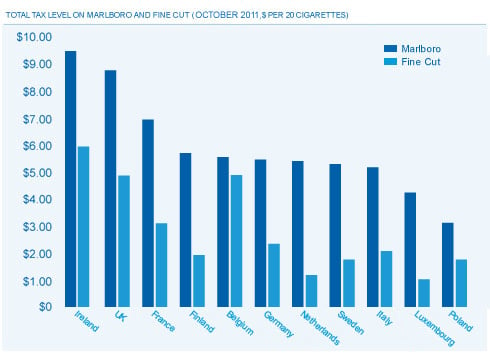 The sum of the gains in these categories does not make up for the 185 billion stick drop-off in cigarette volume, but it eases the decline for companies positioned to take advantage of it.

Philip Morris' rivals have the upper hand
Philip Morris may be the largest non-government tobacco company in the world, but that hardly guarantees its success in every market. Although it maintains a leading share of the cigarette market, its volume in the European Union declined by 6.5% in 2013. Unfortunately, the company lags its European rivals in each of the categories that benefit from declining cigarette volume.

The big four European tobacco companies -- Philip Morris, British American Tobacco, Imperial Tobacco, and Japan Tobacco -- made up 90% of the European Union market in 2010, up from 60% in 2000 due to industry consolidation. However, while its three rivals gobbled up smaller tobacco companies, Philip Morris stayed out of the European consolidation frenzy. This may have hurt its share of the categories now benefiting from better pricing relative to cigarettes.

For instance, Philip Morris maintains a less than 5% share of the RYO market, well behind Imperial Tobacco and British American Tobacco. 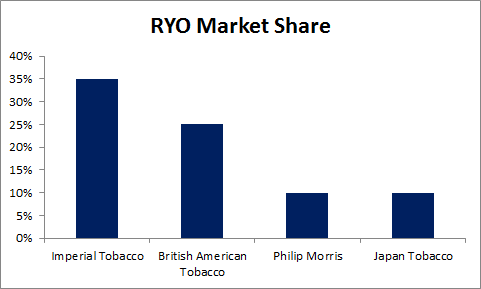 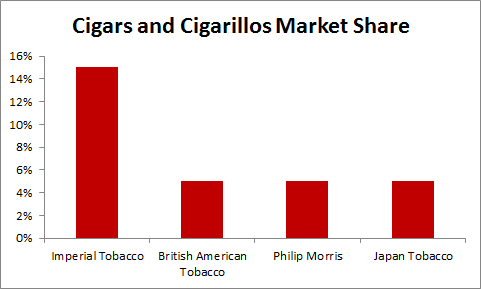 As if it weren't enough that Philip Morris trails its competitors in legitimate markets, Philip Morris also has the undesirable distinction of being the most counterfeited cigarette company; its brands accounted for 28% of the European Union black market in 2010. As excise taxes increase and carton graphics become less differentiated, the illicit market will only grow larger. Unless European Union governments decide to crack down on the black market, this could become a major problem for the tobacco giant.

What can Philip Morris do?
Philip Morris' trailing position in the fast-growing RYO and cigarillo markets is a short-term problem. Although Imperial Tobacco benefits as the market leader, the growth in these categories will never offset the decline in cigarette volume. Ultimately, tobacco companies must find a new growth category or face a permanent decline.

Electronic cigarettes have been touted as a possible savior, but regulatory uncertainty -- particularly in the European Union -- and the lack of rigorous health studies on the devices make their future less certain. However, Philip Morris' joint venture with Altria Group ( MO 0.82% ) gives it access to electronic-cigarette technology should regulators and consumer behavior pave the way for growth.

Meanwhile, Philip Morris is going out on its own by investing heavily in heated tobacco products. Instead of burning tobacco, the new products will simply heat it up so as not to expose the smoker to as many deadly toxins as are released when tobacco is burned. If electronic cigarettes face greater headwinds than are now present, Philip Morris may own the only major tobacco company with a growth product.

Bottom line
Philip Morris is struggling in the European Union. High taxes, strict regulation, and weak consumer confidence have poisoned the operating environment. Even if economic activity strengthens in the coming years, cigarette volume will continue its decline. Since Philip Morris is not a market leader in any other major category in the region, its only chances at growth are electronic cigarettes and heated tobacco products. Investors should focus on these two product categories to discern Philip Morris' ultimate direction in Europe.