Watching the Keystone XL pipeline debate has been like watching a train wreck. For the past five years, TransCanada (NYSE:TRP) has tried to get this pipeline approved while environmentalists have opposed the construction by almost any means possible. Along the way, though, both sides have been using arguments that can be ripped apart more easily than a wet paper bag. What's so frustrating is that there are way more defensible arguments for both sides to use that actually make sense, yet no one ever seems to mention them. Let's look at why the arguments on both sides are so flawed, and what should be the talking points.

The advocates' red herring: jobs
The biggest argument that advocates of the Keystone XL pipeline have used for the past several years is the jobs that can be created from the pipeline. On the surface, it's a great-sounding message that's easy to get behind when unemployment numbers are still not where we'd like. The Keystone XL advocacy group Consumer Energy Alliance has recently published that the pipeline will create 42,000 construction and manufacturing jobs in the United States.

What makes these numbers so suspect is that the models used for these reports can be adapted to create almost any number you want. It all depends on what you consider a "created job." Do you only count the jobs directly associated with the maintenance and operation of the pipeline? Or can you go so far as to say the extra bartender job near the steel manufacturing plant forming the pipeline counts as well? Depending on the parameters, the total jobs created for the pipeline range from 35 to more than 550,000.

The cold truth is that these jobs numbers can be massaged in a way to get the number you want. So it probably isn't in an advocate's best interest to stake so much of a position on such a shaky foundation. 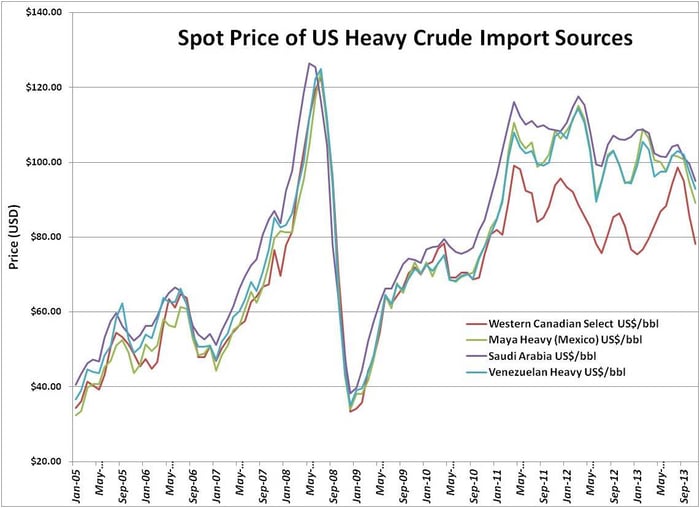 Ever since oil sands operations started producing in earnest back in 2011, the price for imported Canadian oil has pretty consistently traded at a price $20-$30 per barrel to other sources such as Maya Heavy from Mexico or Venezuela Heavy. Currently, the United States still imports about 4 million barrels per day of heavy oil, mostly from Mexico, Venezuela, and Saudi Arabia. If we could replace these imports with Canadian crude, the U.S. could save between $6 billion and $9 billion a year. Not only does that positively affect the price of domestic gasoline, but it also reduces the U.S. trade deficit.

Some can counter this argument with the concept that Canadian crude would simply be exported once it reaches the Gulf Coast. While it's hard to completely deny this will happen, it would be hard to imagine that Gulf Coast refiners wouldn't try to use as much Canadian oil as possible. Valero (NYSE:VLO) has already signed a contract to take 100,000 barrels per day from Canadian Natural Resources (NYSE:CNQ) via the Keystone XL and deals with other producers for more. Valero may turn around and export that oil as gasoline and diesel, but it's already exporting more than 350,000 barrels per day, and many of Valero's Gulf Coast refineries are configured to run heavy imported crudes from Venezuela and the Middle East as its feedstock. So why argue that we will export refined Canadian crude when we already export refined Venezuelan crude?

Opponents' red herring: carbon pollution
One of the big talking points for opponents of the Keystone XL pipeline is that the process to extract Canadian oil sands is a carbon-intensive process. Activist group Friends of the Earth states that the extraction of Canadian oil sands emits three times as much carbon as the extraction of a conventional oil well. While there is some truth to this statement, it doesn't necessarily convey the whole situation. Oil sands wouldn't be used to displace conventional oil but instead those heavy oils from Venezuela and the Middle East I mentioned earlier. 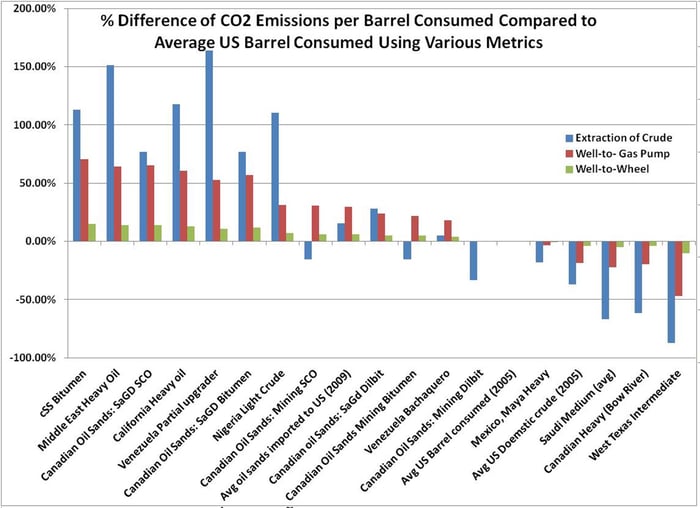 Based on this data, the full-lifecycle carbon emissions for a barrel of Canadian oil sands is 6% greater than the average barrel consumed in the United States. Also, Venezuelan upgraded heavy oil and Middle Eastern heavy oil are 11% and 14% more carbon-intense than the average U.S. barrel.

So yes, in absolute terms, Canadian oil sands are more carbon-intense. When you compare that oil with its competition and account for all of the emissions needed to get that barrel of oil from the source to your gas tank, however, it doesn't look at horrible as many portray it to be.

What opponents should focus on: spill liability
Oil sands or not, cleaning up oil is an extremely messy business, and a very costly one as well. When an oil sands pipeline owned by Enbridge (NYSE:ENB) spilled about 20,000 barrels of dilluted bitumen -- the way oil sands are treated to move through pipes -- it resulted in a spill that cost more than $700 million to clean up. That translates to about $35,000 per barrel spilled in cleanup costs, more than 12 times what it cost per barrel to clean up the Deepwater Horizon spill.

We can't prevent every accident, but what we can do is make sure there's enough money to cover the costs of cleanup. This, unfortunately, is one of the major weaknesses here in the United States. For any spill that occurs onshore, the Oil Pollution Act of 1990 states that the party responsible for the spill covers the first $350 million of those costs, and the Oil Spill Liability Trust Fund -- funded by per-barrel excise taxes -- will cover the rest of those costs unless the party responsible for the spill is found to be negligent. Unfortunately, this fund holds only about $2.5 billion. These rules were created almost 25 years ago, and the costs of cleanup have are well beyond the limits made back then. Had Enbridge not covered the costs for the entire spill, that would have cut the trust fund by a third, and it takes years to replenish this fund.

This also brings up a question: What if the company that spills can't afford to cover the costs? This trust fund isn't large enough to cover a major spill like the Deepwater Horizon, so the ultimate costs would have to come from the federal government. This should be a major rallying point for opponents of Keystone XL and other oil projects. By increasing the liability cap on the party responsible and increasing the funds available in the Oil Spill Liability Trust Fund though per-barrel excise taxes, it ensures that we have enough money to cover cleanup efforts in the event of a spill, gives greater incentive for companies to ensure that all safety precautions are taken to prevent spills, and may even make a company reconsider building a pipeline if it knows the penalties it could face if a spill were to happen.

Let's have an argument like adults
Tying a political decision to terms like "jobs" and "carbon emissions" tug at our emotions and are more likely to get our attention in a 30-second television ad, but from an argumentative standpoint they barely hold water. So I'm making a plea to the marketing teams and PR people on both sides of this argument: Stop treating us like children. The Keystone XL pipeline is a transformative decision that could have a profound impact on energy, trade, the economy, and political relationships with both friends and enemies. It would be a disservice to the American public to veil such a major decision with half-truths and shaky statistics.