After reporting its performance for the fourth quarter of its 2013 fiscal year, Deckers Outdoor (NYSE:DECK)saw its shares plummet 12% to close at $74.35. For months, the shoe company's shares have been on a tear, rising 95% from their 52-week low to a 52-week high. Now, however, with shares trading at a 17% discount to their high, is the company a great investment prospect, or is the business destined to see even more hardships?

Deckers had a blowout quarter!
For the quarter, Deckers reported revenue of $736 million. This represents a 19% increase compared to the $617.3 million management reported in the year-ago quarter. In its release, the company highlighted that all of its brands saw significant sales improvements for the year.

Excluding its other brands category, the company's Sanuk Brand saw the highest sales increase on a percentage basis. Compared to the fourth quarter of 2012, its Sanuk sales rose 45%. On a dollar basis, though, the 18% jump in revenue experienced by the company's UGG Brand, from $584.4 million to $690.9 million, was the largest.

The increased sales the business enjoyed combined with its cost of goods sold falling from 53.7% of sales to 48.9% allowed it to post strong earnings for the quarter. In its release, Deckers reports its earnings per share at $4.04. This is a whopping 46% jump compared to the $2.77 the business reported a year earlier and beat out analyst estimates of $3.80 by 6%.

But a blowout quarter just isn't enough!
With results like these, some investors are probably wondering why the company's shares aren't up 12% for the day instead of down. The answer is that earnings are nice to see, but investors are more worried about how well a company will perform down the road than how it performed in the last quarter.

In its release, management highlights a growth forecast that scared off many shareholders on Friday. For its 2014 fiscal year, management believes Deckers will report revenue that is 10% higher than the approximately $1.6 billion it reported for 2013. At this level, the business would report revenue of $1.7 billion, slightly higher than what analysts initially forecast.

The real problem that investors are trying to digest is the business' forecast for profitability. For the year, analysts expect Deckers to report earnings of $4.70 per share. Unfortunately, management made clear that earnings will probably come in at around $4.36 per share, placing the company's current P/E ratio (using 2014's earnings) at 17 times.

Should investors continue talking with their feet?
In light of this lackluster outlook, shareholders responded by selling their shares (aka talking with their feet). But is this really the best course of action? Is the company's outlook so dim that it makes other shoe companies look more attractive, or is Mr. Market merely overreacting? 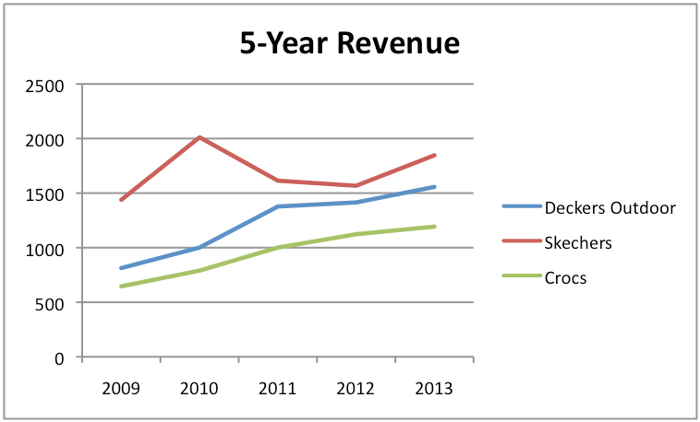 For starters, we should look at Skechers (NYSE:SKX). With shares of the shoe company trading at $33.73, the stock is about 69% above its 52-week low. The main driver behind this stems from management's ability to turn the business around. You see, over the past five years, the company has been on a roller coaster. After seeing revenue fall 22% between 2010 and 2012, the company grew by 18% through 2013.

Deckers has been much more consistent. Over the past five years, the company's revenue rose 91% from $813.2 million to about $1.6 billion. Meanwhile, Crocs (NASDAQ:CROX) grew its top line by 84% from $645.8 million to approximately $1.2 billion. Just as in the case of Deckers, Crocs grew in a steady fashion, but fears that its growth might be slowing have caused the business' share price to become modestly depressed. 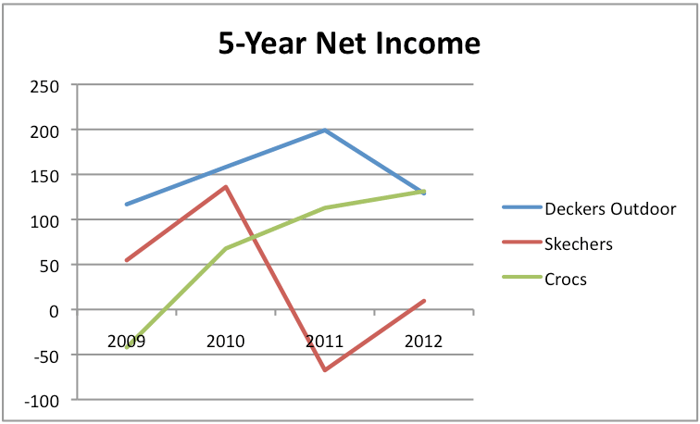 Looking at revenue, we can clearly see definable trends with both Deckers and Crocs. When it comes to net income, though, there is no clear trend. All three shoe retailers experienced volatility, which makes it difficult to tell which is the better prospect at first glance. However, it should be noted that while each company's profitability has been uncertain, Deckers' five-year net profit margin came out to 12.6% at a time when Crocs and Skechers reported average net profit margins of 5.2% and 2%, respectively.

Foolish takeaway
Based on the data presented above, it looks as though Deckers is a high-quality company that is still experiencing a growth spurt. Yes, the business' profitability will likely remain less than stellar throughout 2014, but its long-term track record of revenue growth and high margins likely mean that it offers opportunities that neither Crocs nor Skechers can. In the event that Deckers isn't to your liking, though, Crocs looks like it could make for an interesting prospect because of its smaller size and strong revenue growth rate.