After reporting earnings on Feb. 26, Lowe's (NYSE:LOW) saw its shares rise more than 5%. The company posted strong results for the fourth quarter of 2013, which was enough to rouse investor enthusiasm. Given this jump in market cap, is Mr. Market signaling that Lowe's might be the future of home improvement, or is the business overextended?

Earnings were strong!
For the quarter, Lowe's reported revenue of $11.7 billion. This represents a nearly 6% jump in sales compared to the $11 billion the company reported in the year-ago quarter and suggests that business is alive and well. In its earnings release, management highlights a 3.9% rise in comparable-store sales for the quarter as the primary driver behind the company's revenue jump.

Looking at profitability, Lowe's did even better. For the quarter, the company's earnings per share soared 11.5% from $0.26 to $0.29. This increase in profitability was attributable to a 6.3% jump in net income but was largely due to a 6.7% drop in the number of shares outstanding.

As the business has grown, the company's management has taken every opportunity to buy back shares. During the quarter, the company repurchased $958 million worth of its shares and announced that it plans to acquire up to another $6.3 billion worth of shares moving forward.

But how does Lowe's stack up to its peers?
Based on Lowe's earnings results, it looks like the company has a great deal of potential for the Foolish investor. Over the past five years, the business saw its revenue rise 13% from $47.2 billion to $53.4 billion, while its net income jumped an impressive 28% from $1.8 billion to $2.3 billion. Although these results were strong, does this put the company as a top contender for growth in its field, or does it fall short?

For starters, let's look at Lumber Liquidators (NYSE:LL). Over the past five years, the company saw its revenue jump a whopping 84% from $544.6 million to $1 billion. This jump in sales may make Lowe's look bad, but investors should consider the differences between the two before comparing.

With a market cap of $3 billion, the company is a decent size but is less than 6% the size of Lowe's, which has a market cap of nearly $53 billion. Given this disparity, it's only natural that Lumber Liquidators should have the ability to grow faster than Lowe's, while a larger company should, in theory, grow faster, right? Right!? Well, not entirely.

You see, over the same time frame, Home Depot (NYSE:HD) increased its revenue by 19% from $66.2 billion to $78.8 billion. On top of having higher revenue, the company's market cap of $116 billion makes the home-improvement giant more than twice the size of Lowe's.

Looking at profitability, we see a similar occurrence. Over the past five years, Lumber Liquidators has seen its net income rise an impressive 188% from $26.9 million to $77.4 million. Just as in the case of its top-line growth, the company can thank its relatively small size for its growth in profitability. However, there is one caveat.

With a smaller company that is growing rapidly, it's only natural to expect for its profits to be somewhat depressed. The reason here is twofold. First, the company may try to compete with its larger competitors on the basis of price so as to draw in customers. Second, margins may be pressured because smaller companies tend to lack the same buying power than rivals like Home Depot or Lowe's have.

Analyzing the net profit margin of each business, we see the following five-year pattern below: 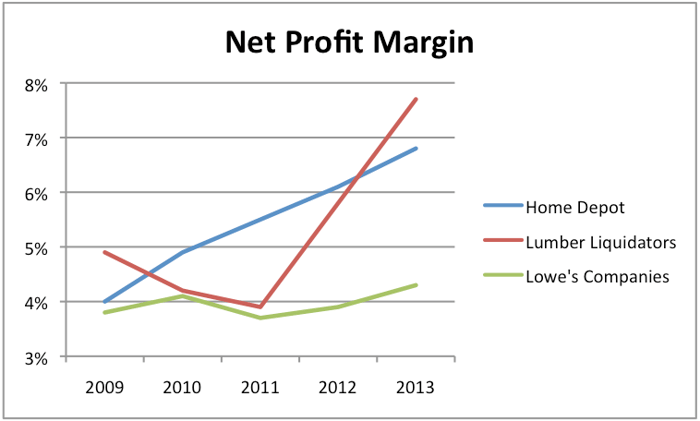 As we can see, Lumber Liquidators has seen its profitability spike from 3.9% in 2011 to 7.7% in 2013, while Lowe's has reported numbers that hover around 4% consistently. In each of these years, Lumber Liquidators has outperformed its much larger rival. Meanwhile, Home Depot, which has seen its net income rise 102% from $2.7 billion to $5.4 billion, reported a steady uptrend from a net profit margin of 4% to 6.8%.

Foolish takeaway
Based on the performance of each home-improvement company, Lowe's looks like it's at the bottom of the barrel. Not only has revenue growth trailed that of Lumber Liquidators and Home Depot, but Lowe's rise in profits has been anything but beautiful. Moving forward, there is the chance for the business to turn things around; but it looks as though the Foolish investor may want to consider analyzing Home Depot and Lumber Liquidators in greater detail before rendering an investment decision.