Few drugs become multi-billion blockbusters, but those that do usually have similar characteristics. They treat big, and growing patient populations; they don't compete with too many other drugs (and outperform those that they do); and they have pricing power.

Investors recognizing that Regeneron's (NASDAQ:REGN) and Bayer's (OTC:BAYR.Y) Eylea enjoys all three of these characteristics have caused Regeneron's shares to more than double in the past year. 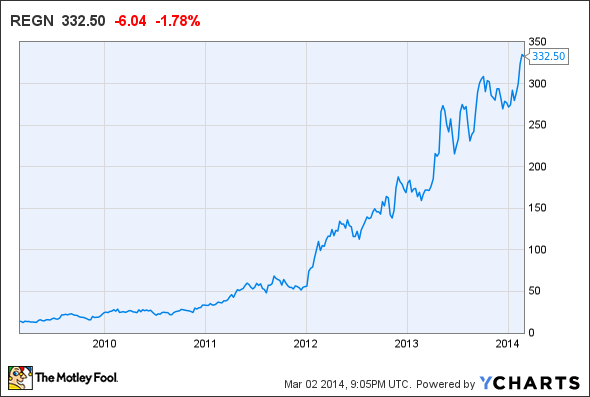 1. Big getting bigger
Eylea has been approved for two indications so far, age-related macular degeneration, or AMD, and macular edema following central retinal vein occlusion, or CRVO. Those two indications have propelled the drug to more than $1.8 billion in annual global sales.

AMD is the leading cause of vision loss in people over 50 years. It damages the macula, a small spot in the center of the retina responsible for seeing things directly ahead of us. As a result, patients with AMD have difficulty doing everyday things like seeing faces, driving, reading, and writing.

The market for CRVO is smaller, but important. CRVO is the second most common cause of vision loss. CRVO patients lose vision because blood clots clog a critical vein within the eye. Like AMD, CRVO is more common in older patients, suggesting aging baby boomers will increase the patient population.

While both those markets are growing, Eylea's opportunity isn't limited to them. Regeneron has also filed for FDA approval of Eylea as a treatment for diabetic macular edema, or DME.

DME is the most common cause of vision loss in people with diabetic retinopathy. There are about 1 million cases of DME in the U.S., and more than 300,000 new cases are diagnosed annually.

That means the DME patient population that Eylea targets is far larger than the AMD population. This is especially true considering the number of diabetics worldwide is expected to grow from 366 million in 2011 to 552 million in 2030. That works out to about three new cases of diabetes every 10 seconds.

2. Besting competitors
Eylea's main competitor is Roche's (OTC:RHHBY) and Novartis' (NYSE:NVS) blockbuster drug Lucentis. Lucentis was approved for AMD in 2006, CRVO in 2010, and DME in 2012. Last year, Novartis, the company responsible for commercialization outside the U.S., reported international Lucentis sales of $2.38 billion. According to Roche, the company responsible for U.S. sales, revenue from Lucentis climbed to nearly $500 million for the most recent quarter.

However, Lucentis growth has slowed following Eylea's launch. Last year, 76% of Novartis' Lucentis non-U.S. sales were tied to AMD, down from 89% in 2012. And in the U.S., sales of Lucentis fell 9% year-over-year in the fourth quarter of 2012, prior to growth returning thanks to the DME approval.

There are two major reasons behind Eylea's market share growth. First, Eylea comes with a more patient friendly dosing schedule. It's injected once-monthly for the first three months, then every two months thereafter. While Novartis' and Roche's Lucentis can be used less frequently thanks to a change to its label in 2013, Lucentis is most effective when dosed monthly.

Fewer doses is particularly attractive given the two drugs offer similar efficacy.
In DME, for example, Lucentis patients could read a mean 12.5 more letters from baseline on a standard eye chart at 24 months. That was significantly better than the mean 2.6 letter improvement on placebo injections. That matches up pretty evenly with Eylea patients, who saw a mean change of 11.5 letters after two years and 12.5 letters after one year.

3. Pricing power that keeps revenue chugging
The second reason Eylea is winning scripts for AMD and CRVO is its lower -- but still profit friendly -- treatment cost. Eylea costs $1,850 per dose, less than Lucentis' $2,000 price tag. Thanks to Eylea's favorable dosing schedule, a full year of Eylea costs about $16,000, which is $8,000 less than Lucentis. That advantage gives insurers plenty of incentive to push Eylea rather than Lucentis, particularly given that the two drugs offer similar efficacy.

As a result, Eylea got off to a fast start with U.S. sales eclipsing $250 million a quarter just a year after winning approval in November 2011. More patients, the CRVO indication approval, and ongoing injections for current patients helped lift U.S. sales to more $400 million in the fourth quarter of 2013.

That fourth quarter performance brought Eylea's U.S. net sales to $1.4 billion last year, up 68% from 2012. Sales outside the U.S., where Bayer has responsibility for commercialization, were $472 million in 2013 -- not bad for the drug's first full year in those markets.

Fool-worthy final thoughts
Regeneron may have a future competitor given positive results from a mid stage trial that combined Lucentis with Ophthotech's (NASDAQ:ISEE) Fovista. During phase 2 studies, that combination outperformed Lucentis alone, improving vision by 10.6 letters on a standard eye chart at 24 weeks, versus 6.5 letters for Lucentis.

Based on that, Ophthotech began phase 3 trials last August; however Regeneron investors shouldn't be too nervous yet given data from those trials aren't likely until 2016.

Thanks to improving share growth in AMD and a potential approval in DME later this year, Regeneron is guiding for between $1.7 billion and $1.8 billion in U.S. sales in 2014. Assuming the FDA does approve the drug for DME when it decides on August 18th, sales should continue to ramp in 2015 as the drug wins over doctors and nets DME approval in additional overseas markets. That has analysts projecting Eylea's peak annual sales may reach $4.7 billion in 2018.   A projection that solidifies the drug's megablockbuster status.