Las Vegas Sands (NYSE:LVS) wants to be a leader in the bidding for casinos in Japan. At a conference in Tokyo earlier this week regarding a potential investment in Japan, Sands CEO Sheldon Adelson said that "We will spend whatever it takes...would I put in $10 billion? Yes." However, Las Vegas Sands is not the only company that is preparing to bid a large amount of money to become the first to build in Japan.

Casinos are currently banned in Japan, but that is likely to change in the coming months. The government is voting on legislation in the coming session that would allow casino companies to bid to build gaming resorts in Tokyo and Osaka. Both major government parties support the legislation so far, a good sign that it will be passed without hassle. Analysts estimate that Japan could become the second-largest gambling market in the world if it opens up to gaming companies.

An echo of 2006, why success in Singapore shows potential success in Japan
In May 2006, Las Vegas Sands won the first successful bid to build in Singapore with a $3.2 billion investment to build an integrated resort. The government had agreed to allow two integrated casino resorts in 2005 after a 40 year ban, and during the bidding process it received bids from 19 different operators. Near the end of the bidding, four contestants were in the finals, including Malaysia's Genting (which would eventually win the second bid), MGM International (NYSE:MGM), and Harrah's.

Pleasing the Singaporean government was not easy. Stephen A. Wynn, the chief of Wynn Resorts (NASDAQ:WYNN), criticized Singapore for micromanaging the project to the point of making it unprofitable for the casino operator. This is important because there are many similarities between the concerns of the Singaporean government in 2006 and those of the Japanese government in 2014. Governments regulate the casino industry to assure that it is clean, crime free, family friendly, and adds wealth and jobs to the economy.

The picturesque casino built by Las Vegas Sands has become an icon of tourism in Singapore. Photo: Marina Bay Sands

Las Vegas Sands' plans to create an integrated resort with live theatre and a world-class museum designed by Moshe Safdie, the architect who designed the Holocaust Museum in Jerusalem, helped sway the government. The company also promised that its project would create 10,400 jobs, 75% of which would be for local residents. It would ultimately account for 1% of Singapore's entire economy.

It worked, and as a reward, Las Vegas Sands received a 30-year concession to operate the casino as well as assurance that the government would not allow additional casinos into the country for at least 10 years. This willingness to work with the government is good for the company's prospects in Japan.

Sands is not new to the Asian market
Asia is by no means a new market for Las Vegas Sands. In 2013, the company made 86% of its revenue in Asia from its operations in Macau and Singapore. The company will happily continue to push that percentage higher with more revenue coming from Japan in the future. The company's Asian profits over the last five years have been amazing for investors. Those who bought shares of Sands in 2009 when its Singaporean casino was just opening received the reward of 3600% growth in the share price. 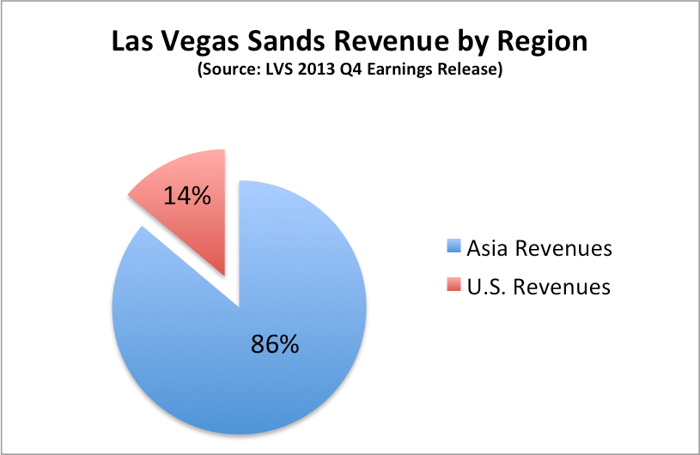 Sands is not alone in this coming bidding war
MGM Resorts and Wynn Resorts are both getting serious about their talks with Japanese officials and they say that, if allowed, they will happily invest the government-estimated $4.8 billion needed to build a casino resort. These two casino companies also know the value of big investments in Asia. Wynn reaped $1,119.9 million from its Macau operations in the fourth quarter of 2013, 74% of the company's total revenue for the quarter, while MGM Resorts noted in its third quarter 2013 earnings release that it received $808.4 million from its China operations, 34% of the quarter's total revenue.

Caesars Entertainment (NASDAQ:CZR) is another competitor that has taken a head start by meeting with Osaka officials to discuss prospective plans for investment in Japan. With no Macau holdings, and after an unsuccessful bid to build in South Korea last year, Caesars is still trying for a major Asian holding. However, when South Korea denied Caesars' bid to build last year, industry analysts reported that the most likely reason for the denial was the company's $27 billion in total debt. With a current debt load of $21.5 billion and recent announcements that discussed further plans to continue restructuring the debt, the company may still have a hard time persuading the Japanese government that its debt is not an issue.

Melco Crown (NASDAQ:MLCO) has good chances in Japan as well. This is an Asia-based company that's still accessible to U.S. investors, as it's listed in the U.S. as well as in Hong Kong. The company can use its Macau casinos to show how it will incorporate non-gaming entertainment into its Japanese casino. World-renowned live acrobatic and dance shows housed in the Macau casino, such as the beautiful House of Dancing Water, have made this property a destination for vacationers, even those who are not gambling. An analyst at Barrons noted that "the House of Dancing Water show is a well known and respected brand and has given MPEL some brand equity in Japan."

Everyone wants in on Japan, but which company can do it?
Sands CEO Adelson's recent comments about his willingness to put $10 billion into a Japanese resort are reminiscent of his vow to invest in Singapore eight years ago. There are many similarities between the Singaporean and Japanese governments in regard to their concerns about casino companies. Sands was able to win in Singapore in 2006, and it has a strong shot at winning again. But beware--other operators will be fighting hard for bids as well.