Move along, folks -- nothing to see here. That was the market's attitude on Tuesday toward the situation in Ukraine, as U.S. stocks rebounded strongly from yesterday's losses. The benchmark S&P 500 index gained 1.5%, while the narrower Dow Jones Industrial Average (DJINDICES:^DJI) rose 1.4%. One large-capitalization stock that handily beat the broad market: Qualcomm (NASDAQ:QCOM). The leading mobile-chip manufacturer was speaking investors' language when it announced a 20% increase in its dividend and a $5 billion increase in its share repurchase program, but the announcement shouldn't have come as a surprise.

In the aftermath of the financial crisis, investors have found a new taste for income yield, and Qualcomm is no laggard in that area: Today's 20% dividend increase follows a 40% raise only a year ago.

Those generous increases aren't the result of pressure from an aggressive activist shareholder, either (not directly, although Qualcomm management will not have missed this trend in its sector). Contrary to many of its large-cap technology peers, Qualcomm has been paying a dividend since 2003; through its fiscal year 2013, the annual dividend had grown at a handsome annualized rate of 32%. Those dividends have made a powerful contribution to the stock's performance over the past decade, as the following 10-year chart demonstrates: 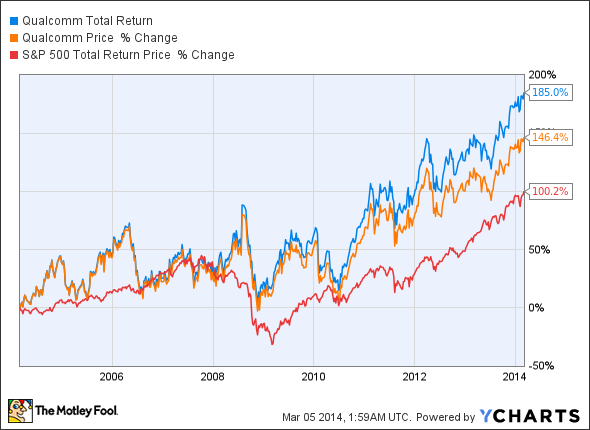 Qualcomm's total return over the period (blue line) exceeds its price return (orange line) by roughly 40 percentage points -- and both have soundly beaten the total return on the S&P 500 (red line). The 10-year chart also provides some useful perspective to investors who complain that the stock has lagged major indexes in the current bull market, which began nearly five years ago.

Combine the dividends with share buybacks, and you have a cash return machine: In fiscal 2013, Qualcomm paid out an impressive 86% of its free cash flow through $2.1 billion in dividends and $4.6 billion of share repurchases. Last September, then-CEO Paul Jacobs vowed to return 75% of free cash flow to investors via dividends and share buybacks. His successor, Steve Mollenkopf -- who was formally installed during today's annual shareholder meeting -- didn't offer any updates or changes to those guidelines.

Does Qualcomm's capital allocation policy signal limited opportunities for growth and investment? There is little reason to think so; the straightforward explanation is that, like large-cap peers Cisco Systems or Apple, Qualcomm's operating cash flows dwarf its capital expenditures, whether they be for maintaining or, indeed, growing the business. This is the case now, as it has been for years.

Furthermore, although the growth rate in smartphone shipments has been slowing, Mollenkopf was upbeat with regard to Qualcomm's growth prospects (as CEOs are wont to be, admittedly):

A lot of people talk about the fact that everyone has a smartphone. That's true to some degree in some parts of the world, but the world is a big place and there are a lot more smartphones coming.

Qualcomm is ahead of the pack when it comes to mobile chips, but, in the technology sector, it's been ahead of the curve on capital allocation, too.