Every quarter, large money-managers have to disclose what they've bought and sold via "13F" filings. While Fools don't always (or even usually) follow what the big money does, we can often glean an idea or two by tracing their footsteps.

David Tepper's performance isn't something you can mirror based on 13Fs. Source: Appaloosa Management.

Over the past decade, few hedge funds can come close to matching what David Tepper has done at Appaloosa Management, as he managed to avoid most of the catastrophic downturn in 2008 and 2009 and has averaged 40% annualized returns since then. He has also managed to more than double his own net worth in the past few years; he's now estimated to be worth more than $10 billion.

Two moves of note on Appaloosa's latest 13F filing show a reduction in shares of offshore oil rig company Transocean (NYSE:RIG) and the opening of a position in oil services heavyweight Halliburton (NYSE:HAL). Is there anything we can learn from this move to help attain more Tepper-like returns?

Reality check
Let's be honest: Trying to replicate David Tepper's performance by mimicking his stock buys is a fool's errand. Tepper seems to have a knack for identifying extremely undervalued assets at great prices, and because 13Fs for any given quarter don't come out for as long as 45 days after the end of that quarter, some of his moves could have been made four months before you saw the report. Further, there's no way to know what has happened since, and a stock bought last quarter may have already been sold by the time you actually see the 13F.

The point? Don't try to mimic a hedge fund's actions. Using successful managers' 13Fs as a starting point, however, isn't a bad thing to do.

Energy demand growing
If there's anything on the surface to note, both Transocean and Halliburton are deeply tied to the production of oil and natural gas. Both companies are key suppliers and service providers to oil companies large and small. Halliburton is primarily an upstream service provider, meaning it works with oil companies to discover and produce oil and natural-gas reserves. Transocean, however, is in the more narrow and focused business of supplying offshore oil rigs and operating them for clients.

The key for both companies, of course, is an expanding global population -- especially a growing middle class in developing nations -- that will require more cheap energy than is being produced today.

Transocean and Halliburton both face continued litigation as a result of the Macondo explosion and spill. Source: U.S. Coast Guard.

Trying to read the tea leaves for Appaloosa's decision doesn't necessarily accomplish anything for you or me. However, the fund did sell almost 1.2 million shares in the second half of 2013 -- almost half of its Transocean shares. Without trying to divine Appaloosa's reasoning, there is one word that explains why an investor would be wary to hold a large chunk of Transocean: Macondo.

For those who don't recognize that word, the ill-fated Deepwater Horizon rig was operating at a well site named Macondo. Although we're several years removed from the terrible disaster in the Gulf of Mexico, Transocean's exposure remains not inconsequential. As evidence, the word "Macondo" appears in the 2013 annual report -- released just last week -- 137 times in a 235-page document.

Here's the thing: This doesn't make Transocean a bad investment, or even one to avoid. It does serve as a reminder that prudent management of risk is necessary, and that could mean reducing the size of a holding with potential risks such as those Transocean faces.

Of bigger concern is the competitive challenge Transocean faces from smaller peers like Seadrill and Noble Corp, which are investing heavily in newer ships capable of operating in both deeper water and more hostile conditions than those in which the majority of Transocean's older fleet can operate. In all fairness, Transocean is also rapidly adding newer ships and rigs to its fleet, but it will continue to operate a lot of older assets that could weigh down results in years to come.

Why Halliburton?
As with Transocean, Halliburton is set to benefit from the long-term story of energy demand, but it was also a key contractor on Macondo as one of the contractors that worked to establish the well. "Macondo" appears 87 times in its annual report, filed Feb. 7. Both companies have some level of exposure to litigation in this matter, but Halliburton seems to have more upside than Transocean.

To start, Halliburton also performs land-based services on every continent except Antarctica, in addition to its offshore work. This additional diversity offers some downside protection, as does the company's limited exposure to the impacts of oil prices versus Transocean, which depends on high oil prices to justify production in deepwater, where rates are highest.

Additionally, Halliburton executed a strong start to its share repurchase program in 2013: 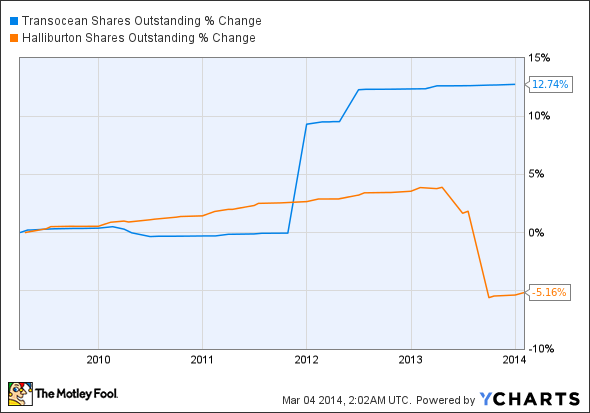 Transocean, on the other hand, has actually increased shares outstanding 12% since 2011, using a debt secured with shares to fund construction of newer ships. Yes, building those newer, more capable ships is important to the company's success, but there needs to be a balance of both company growth and per-share growth, which is what Halliburton's management is focused on.

Final thoughts: remember the big picture
David Tepper isn't investing your money, so don't get too caught up in what he did months ago. If you're going to invest in Halliburton or Transocean, or sell shares if you are already an owner, do it for reasons based in fundamentals, not because of someone else's sell.

Both companies offer upside as well as risk due to the Macondo disaster. Halliburton looks to have more upside and plans to continue returning capital to shareholders. Transocean seems to have more risk due to its collection of older rigs, which could weigh on earnings in addition to the litigation risk.