Warren Buffett has a team helping him find compelling long-term investments and one of those people is Ted Weschler; the person behind Berkshire's nearly 18% ownership stake in dialysis and health care provider company DaVita (NYSE:DVA).

Weschler's interest in dialysis began when he graduated from college 30 years ago, according to a recent interview aired on CNBC. It was even earlier -- 1972 to be exact -- that Medicare Kidney Disease Entitlement was passed, extending Medicare coverage for end stage renal disease, or ESRD, patients for the first time.

A lot has changed since then, but dialysis remains an important life extending therapy that DaVita is using to diversify itself into coordinated patient care. According to Weschler, he owns DaVita for three reasons: the company is improving the quality of health care, delivering savings to the health care system, and has a predictable, shareholder friendly business. Let's see why Weschler likes DaVita more than competitor Fresenius (NYSE:FMS).

1. Providing better quality of care
DaVita and Fresenius are the two largest providers of dialysis services through clinics. While Fresenius owns 37% market share, DaVita isn't far behind at 34%. And while DaVita is best known for its centers, it's also become a major coordinated health care provider thanks to its merger with HealthCare Partners in 2012.

That merger means DaVita is taking a two pronged approach to improving patient outcome. First, DaVita is improving the quality of dialysis care at its centers, which reduces hospitalizations and its inherent risks. Improvements at DaVita and Fresenius have resulted in ESRD patients living longer than they did 21 years ago. 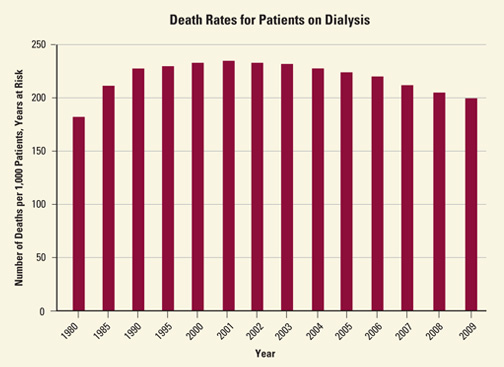 But according to data released by DaVita last September, DaVita is better than Fresenius in kidney disease survival rates. And Since 2001, the gross mortality rate of DaVita's patients has dropped 27% to 13.9% in 2012.

Secondly, DaVita's HealthCare Partners converts primary and specialty care into a physician network offering patients streamlined, holistic care. Since most dialysis patients are seniors diagnosed with multiple conditions such as hypertension and diabetes, the company's expansion into coordinated care offers patient synergies, including an opportunity to closely tie data collected in treatment centers to primary and specialty care.

That could be particularly helpful given that patients whose primary and specialty care doctors are associated report a greater likelihood of information sharing,  which can reduce unnecessary tests and improper referrals that can delay treatment. California patients treated by DaVita's HealthCare Partners, for example, had 50% less inpatient acute bed days than Medicare fee for service patients. That's a strong endorsement of coordinated care's ability to improve overall patient care.

2. Delivering a net savings to health care payers
Despite attempts to control spiraling treatment costs, dialysis represents 6% of all annual Medicare spending. As a result, Medicare represented 50% of DaVita's dialysis revenue as of early 2013. Medicaid, the VA, and Medicare Advantage made up another 15%.

However, while treating patients who aren't eligible for transplant is costly, dialysis is more attractive and less expensive than leaving the disease untreated. Importantly, thanks to industry innovation, dialysis patients are spending less time in expensive hospitals than they did in 2005.

That coordinated care model shifts payers, like Medicare Advantage plans, from paying for visits, procedures, and tests, to paying for care per member. In those deals, payers take a profit and expenses off the top, then pay the rest to DaVita to manage patient care. In some cases the amount is fixed, in other cases it is savings based, but either way the model provides an incentive to eliminate waste.

3. A strong return on capital, predictable growth, and investor friendly management
DaVita, like Fresenius, offers investors a highly predictable revenue stream. For ESRD patients, dialysis is necessary, not optional. And due to a larger and older population, the number of dialysis patients is growing, not shrinking.

Baby boomers are similarly driving growing demand for primary and specialty care, which supports demand for DaVita's HealthCare Partners segment. The number of people with diabetes, for example, is projected to climb to 552 million worldwide in 2030 from 346 million in 2011.

That predictable revenue stream is going to keep kicking off significant cash for DaVita shareholders. Thanks in part to the merger with HealthCare Partners, DaVita's cash flow jumped to nearly $1.8 billion over the past 12 months, which is roughly five times 2009 levels. Meanwhile, cash flow at Fresenius has grown less substantially. 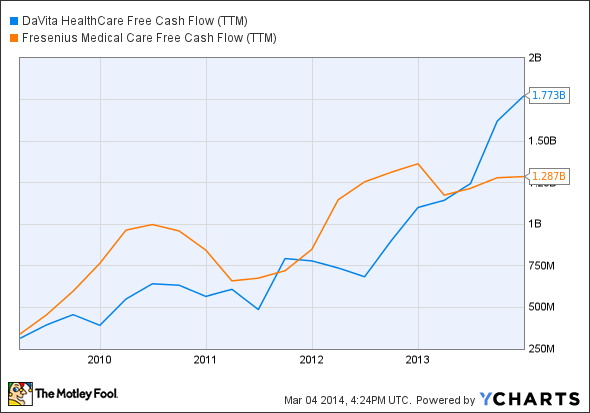 And earnings per share will likely continue higher at DaVita too. EPS has grown from less than $2 a year in 2011 to nearly $3 per share last year. 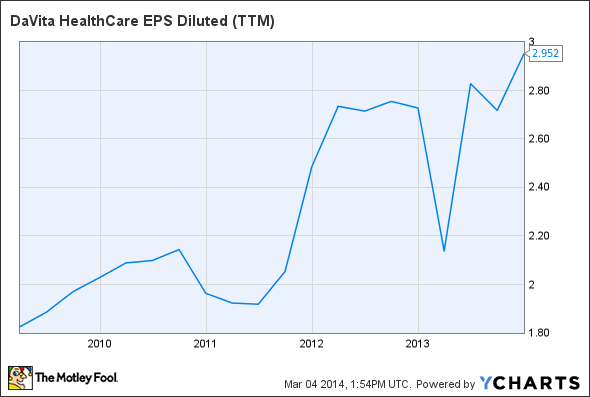 Fool-worthy final thoughts
DaVita provided 6.3% more dialysis treatments per day in the fourth quarter than a year ago, leading to total net revenue of $3.06 billion, up from $2.47 billion last year. Sales from HealthCare Partners climbed 3.2% sequentially to $829 million in the fourth quarter, and that segment's operating income totaled $98 million.

Those numbers should keep improving given health care demand is climbing. That means more attention will be given to outcome based care as reimbursement falls. It also means DaVita will need to lower expenses at dialysis centers, shutter under-performing locations, and integrate new services to protect margin. Regardless, DaVita investors could do a lot worse than having Berkshire Hathaway as a partner.