Facebook stock trades at more than 100 times earnings and has soared 145% in the past twelve months.

Facebook (NASDAQ:FB) and Twitter's (NYSE:TWTR) bubble-like valuations may not be so crazy after all. Despite the recent run-up in stocks like these, portfolio exposure today to "big data and analytics, social, and mobile" is prudent, says Morgan Stanley managing director and chief U.S. equity strategist Adam Parker, cited by The Wall Street Journal. Is Parker's wildly bullish proclamation a sign that that the Street's market figures are losing their minds again and that a bubble really is upon us, or does Parker have a sensible argument?

Wild valuations
There's no better graphical representation of the ridiculous valuations many tech stocks saw during the tech bubble of the late nineties than this chart of Microsoft. 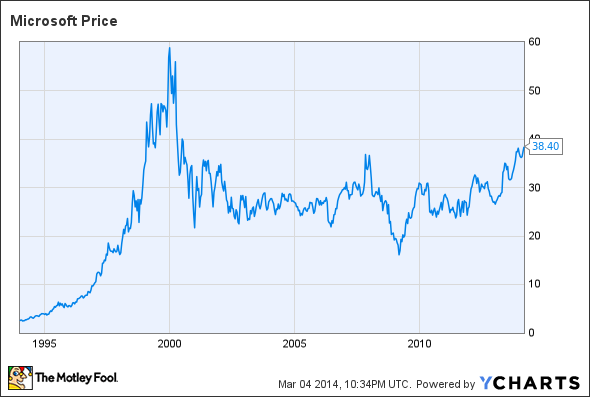 Even nearly 15 years after the tech bubble of the late nineties, Microsoft still trades substantially lower than the highs it saw then.

Now a group of mobile-focused Internet stocks, including Facebook, Twitter, and LinkedIn, are trading at bubble-like valuations. Will we look back and see Microsoft-like charts for these social stocks ten years from now?

Facebook and LinkedIn trade at 22 and 16 times sales, respectively. For reference, Google trades at 7 times sales. Twitter, even after an 18% sell-off in the past month, trumps them all with a price-to-sales ratio of 55. Is another tech bubble upon us -- this time with a hot emphasis on social, mobile, and cloud computing?

The Journal's Matt Jarzemsky notes in his report citing Parker's take on tech stocks that many tech stocks are looking pricey:

The past year, tech stocks in the large-cap S&P 500 have gained 25%, outperforming the overall index's 22% advance. Small-cap tech stocks in the S&P 600 are up a more-impressive 38% ... As a result, about 40% of tech stocks are trading above 5-times sales, a level seen briefly during the 1970s and otherwise only in and around the late-90s tech bubble, Morgan Stanley says.

A bubble or not?
Parker argues that valuations are justified this time around. Central to his argument is that the same tech stocks with rosy valuations are, in general, among the few in the market with robust revenue growth.

Consider Facebook and Twitter for instance. Not only is Facebook's revenue growth staggering, but its year-over-year ad revenue, which accounts for 90% of the social network's total revenue, is actually growing at accelerating rates. 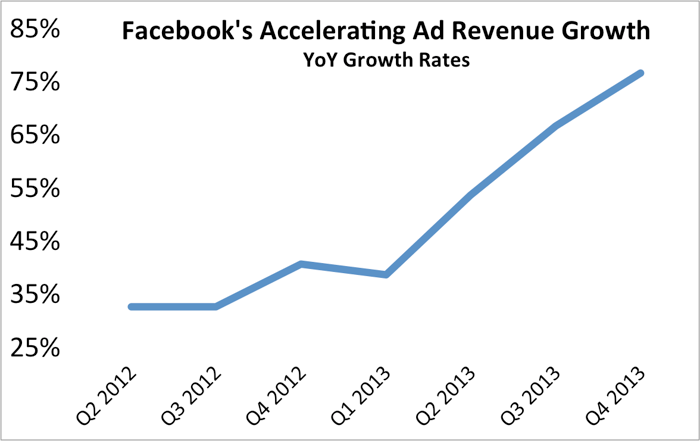 And the sheer rate of Twitter's revenue growth puts Twitter among tech's fastest growing publicly traded companies. The company's fourth quarter revenue was up 116% from the year-ago quarter.

Parker, who has an "overweight" rating on the tech sector, makes an excellent point. When stocks like Facebook and Twitter have rosy valuations, investors shouldn't immediately assume the stocks are overvalued. While I wouldn't argue that either Facebook or Twitter is undervalued, their robust revenue growth combined with their potential for lucrative net margins in the future make these pricey stocks at least a hold.