Much like Moneyball in the MLB, advanced statistics are revolutionizing the NFL. One company is leading the charge, and after speaking with its executives, I'm convinced football will look very different in a few years.

The chess game
STATS LLC, a joint venture between the Associated Press and News Corp (NASDAQ:NWS) (NASDAQ:NWSA), is involved in the analytical footprint of nearly every sport on the planet. From baseball to golf to football, the company is a stat geek's dream.

I recently picked the brain of its senior VP of sports solutions, Brian Kopp, who compared football to a chess match. Despite the game's strategic nature, he said, "there's very limited information" -- something STATS is working to change.

Seven years after the Oakland A's use of unconventional wisdom swept baseball by storm, the 2009 New Orleans Saints began to mesh analytics with game planning and personnel decisions.

John Pollard, another STATS executive, told me that at that time, there still "wasn't a comfort level" associated with any type of math in the NFL, but that's changed in recent seasons. The company is now partnered with a dozen NFL teams, and more are on the horizon.

The advanced stats
Its X-Info system bundles an array of statistics -- burned defenders, play direction, protection time, handoff type, and QB pocket location are a few -- and as Pollard emphasizes, teams are taught how to interpret them. The percentage of times a defender is beaten, or burned, with a pass "got people's attention [because it reveals] who teams should attack," he told me. 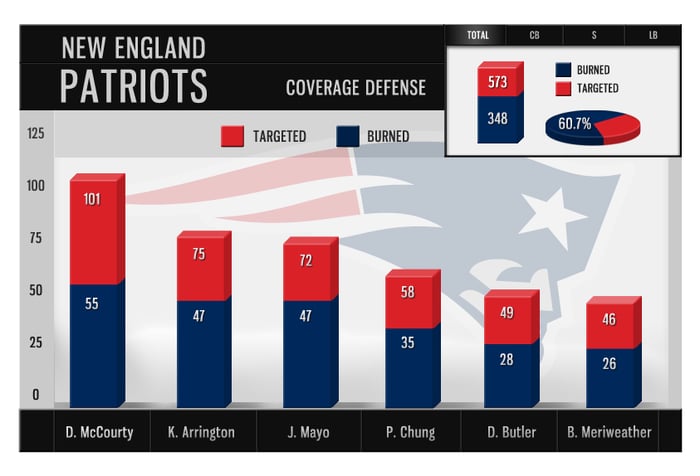 The metric gives quantifiable insight into which defender a QB should target, rather than simply relying on a player's reputation. Situational stats, by comparison, can be tweaked for field position, time of game, score and more. According to Pollard, they're not just for the film room or scouts -- analytics are actually being used during games.
When asked if there's a "go-to" stat NFL executives and coaches want access to, he shared an interesting one: tackle quality. By measuring a defender's positioning, tackling ability, yards allowed after physical contact and proximity to the line of scrimmage, teams can discover weak points on defense. Before there were simply tackles, which is rather one-dimensional.
The business
Although STATS won't disclose how much each NFL team pays for its services, it did confirm there are different subscription options in play, and some can receive discounts for longer, multi-year deals.
Industry sources I've talked to estimate that fantasy lounges, which are used by multiple clubs to boost fans' in-stadium experience, cost between $10 million and $20 million on average. If that's the price tag to develop fantasy stats, it's reasonable to expect teams are willing to pay at least that much to improve their game planning and personnel decisions. And considering that's nearly equal to the typical yearly cost of maintaining an NFL stadium, it's not chump change. But is it worth it?
Recent research suggests an NFL victory costs about $6 million in

A 20-camera SportVU setup, which tracks the motions of players, has been tested at Green Bay's Lambeau Field. Pollard says more in-game tracking is "imminent." Image via Jeramey Jannene, Flickr.

salary, but the league's cap prevents some teams from using all of their revenue on players. For those who want to spend more to get ahead, analytics provide potential.
The future
The NFL has undergone a crash course in stats over the past few years, but it's only the first step. A handful of teams have begun to use GPS chips to track players during practice and games. Much in the same way STATS is using SportVU to record NBA players this year, motion tracking technology adds yet another new dimension to football analytics by monitoring everything from a corner's reaction time to a running back's burst through the line.
While this isn't your daddy's NFL, that's perfectly fine for most fans. Remember, football isn't just America's favorite sport, it's the most gamified as well. Millions of people play fantasy football every year, and statistics play a huge role. Frankly, I'm a bit surprised teams didn't catch on sooner.
This article represents the opinion of the writer, who may disagree with the “official” recommendation position of a Motley Fool premium advisory service. We’re motley! Questioning an investing thesis -- even one of our own -- helps us all think critically about investing and make decisions that help us become smarter, happier, and richer.