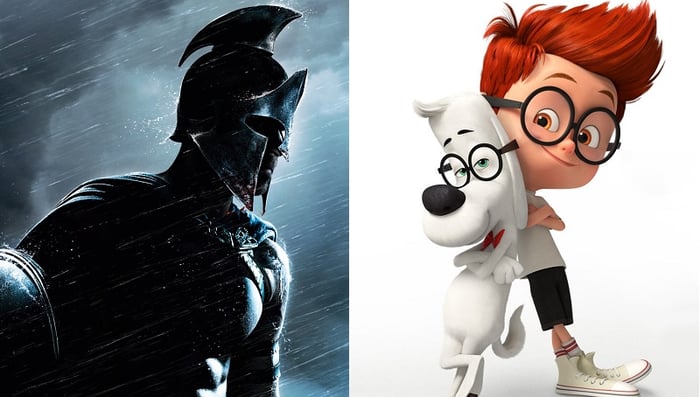 The namesake characters in DreamWorks Animations' ( DWA ) Mr. Peabody & Sherman may have a time machine, but something tells me they'd rather avoid traveling back to the gory, action-packed battle offered by Zack Snyder and Time Warner's ( TWX ) Warner Bros. in 300: Rise of an Empire.

But while both films are set to make their widely anticipated weekend box office debuts tonight, it's obvious they won't suffer from much overlap in their respective target audiences.

Mr. Peabody & Sherman's biggest obstacle
Rather, DreamWorks is faced with the task of enticing families to forego repeat viewings of Time Warner's The LEGO Movie in favor of Mr. Peabody & Sherman, which is based on the Peabody's Improbable History segments of the 1960s cartoon series The Rocky and Bullwinkle Show. That shouldn't be too difficult, however, considering Time Warner's toy-centric blockbuster is already entering its fifth weekend on the big screen.

After toppling all competitors for three weeks in a row, The LEGO Movie grossed "just" $20.9 million last weekend for third place, trailing two newcomers in Comcast ( CMCSA -1.80% ) Universal's Non-Stop and Son of God from News Corp ( NWS -1.62% ) subsidiary 20th Century Fox. If The LEGO Movie continues its expected downward trend, it should grab another $13 million to $14 million over the next three days.

By comparison, early ticket sales currently peg Mr. Peabody & Sherman's first-weekend gross in the $25 million to $35 million range -- not terrible, but not great considering DreamWorks' lofty $145 million production budget. That also puts it somewhere between DreamWorks' $23.8 million debut disaster of 2012's Rise of the Guardians -- which also came with a $145 million price tag -- and the reasonable $34 million launch from 2011's Puss in Boots, which cost $130 million.

Here's what the Spartans need to kill
Meanwhile, Comcast Universal hopes to continue riding on the old-school shoulders of Liam Neeson with Non-Stop, which poses the biggest threat to Time Warner's $100 million period action sequel.

Even then, Non-Stop only won last weekend with $28.9 million. If we assume a similar 55% second-weekend drop as Neeson achieved with 2012's Taken 2, Non-Stop could have trouble adding another $15 million over the next three days.

What's more, the original 300 absolutely dominated everything in its path almost exactly seven years ago, grabbing a stunning $70.9 million in its first weekend en route to the biggest R-rated theatrical run of the year. Even now, that launch stands the fourth-highest of any R-rated film, behind only The Matrix Reloaded, The Hangover Part II, and The Passion of the Christ.

This time, however, industry pundits are decidedly less optimistic for 300: Rise of an Empire, which picks up where the first left off and adds a quasi-historical account of the second Persian invasion of Greece. Even the highest estimates don't see much more than $45 million this weekend.

On one hand, I won't be surprised if 300: Rise of an Empire overachieves considering its late night Thursday showings have already tallied an estimated $3.3 million, or a notable improvement over the $2.5 million its predecessor grabbed in 2007. On the other hand, that could also be a byproduct of early viewers comprised of 300's now-rabid fanbase, whose enthusiasm may not carry over through the weekend with the broader movie-going public.

I'll be sure to touch base as the weekend progresses to see how each film is faring, but I'd love to hear what you think in the meantime! Creatively or financially, will 300: Rise of an Empire come anywhere close to the original? Will Mr. Peabody & Sherman put up a decent fight for second? Let me know in the comments section below.