Shares of social gaming company Zynga (NASDAQ:ZNGA) are up almost 50% since early January. Zynga is one of the best-performing tech stocks of 2014 so far, outperforming competitors Glu Mobile (NASDAQ:GLUU) and Electronic Arts by a wide margin.

Although Zynga's shares have outperformed since mid-2013, the situation was very different back in 2012. After reaching its peak in 2012, Zynga's revenue started to decline quickly after the company's most popular game, FarmVille, experienced a massive decrease in users. Investors became aware that the company had little to no exposure to mobile, and that it was too dependent on Facebook's platform to generate revenue. Shares dropped from $14 per share in early 2012 to almost $2 per share by Nov. 2012. However, the company's now in the middle of a turnaround as it tries to change its business to a mobile-focused model. How does Zynga plan to go mobile? 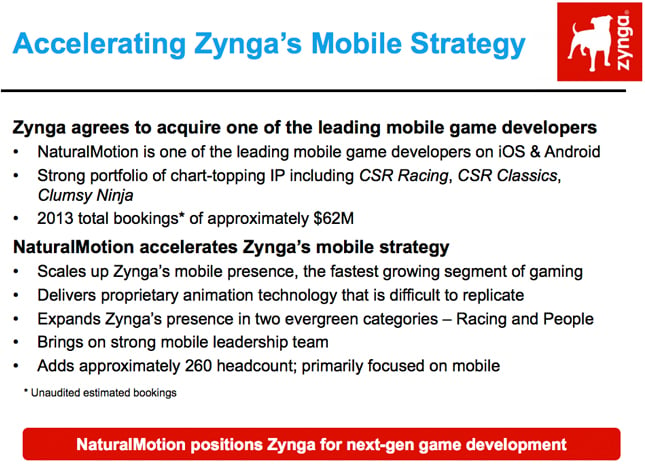 The mobile strategy
When Don Mattrick -- who oversaw the Xbox 360 and PC gaming business at Microsoft for six years -- joined Zynga as CEO in mid-2013, he started executing a back-to-basics approach combined with a mobile focus. Instead of pursuing an online gambling license in the U.S. Mattrick focused on developing free-to-play social games, optimized for mobile platforms.

In order to accelerate its mobile strategy, Mattrick decided to acquire mobile gaming studio NaturalMotion for $527 million on Jan. 30. With the acquisition of NaturalMotion, Zynga is getting 12 years of experience in building sophisticated tools for mobile gaming.

New releases
Perhaps we've just started to see the fruits of Zynga's new mobile strategy. On March 3, the company announced it will kick off a soft launch of FarmVille 2: Country Escape. Zynga will also release two updated core titles by the end of March, Zynga Poker and Words With Friends, which will be available for iOS and Android in select markets before the official release, planned for the end of June.

With FarmVille 2: Country Escape, Zynga is betting the farm on mobile devices, as this is the first FarmVille title designed specifically for tablets and smartphones. Zynga is hoping to recapture some of the game's original players, who stopped playing FarmVille when their gaming preferences changed from using Facebook's platform to playing with mobile devices.

It's all about recovering old users
After reaching a peak of more than 310 million monthly average users in the third quarter of 2012, Zynga's user base decreased considerably, as FarmVille gamers left for mobile games like Hay Day, a similar farm simulation game from SuperCell Oy, which recently reported it had doubled revenue to $892 million in 2013.

Zynga reported 112 million monthly average users in the fourth quarter of 2013, well below its peak. However, a major improvement in user metrics could be in the cards if its mobile games manage to attract previous users. More than a billion people have played Zynga games in the past six years, including 400 million that have played FarmVille.

Beware of Glu Mobile
The road to mobile success is full of challenges. Zynga will have to compete against companies like Glu Mobile that have several years of experience developing games optimized for mobile. A leader of 3-D freemium mobile gaming, Glu recently announced amazing fourth-quarter performance, which was mainly due to the successful release of Deer Hunter 2014, a hunting simulator game that has seen more than 70 million downloads since its release in Oct. 2013.

Final Foolish takeaway
By releasing three major mobile titles only seven months after becoming CEO of Zynga, Don Mattrick is showing us that moving games to mobile continues to be a top priority. The company, which just acquired mobile game studio NaturalMotion in late January, could benefit enormously from recovering old FarmVille users.