Apple and LinkedIn are down about 7% and 8%, respectively, in the past three months. 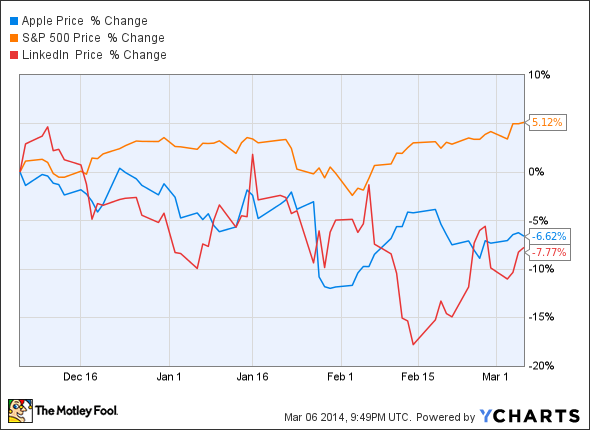 Not only do the reasons for both stocks' sell-offs have very little merit, but both stocks have great opportunity ahead.

Shares fell sharply when the company reported fourth-quarter results. The likely reason for the sell-off was slowing revenue, member, and engagement growth -- all very important metrics for a company with so many forward-looking assumptions priced into the stock. But as the world's leading pure-play in online professional networks, 47% year-over-year revenue growth in the quarter is still robust and exciting.

Finally, LinkedIn's recent launch of its Chinese-language website has given management confidence that it can grow its members in the major market from just 4 million to 140 million. That would boost LinkedIn's total members by about 50%.

Apple shares also sold off sharply when it reported its most recent quarterly results, with shares falling from levels around $550 to about $500. The reason for the sell-off can likely be attributed to less iPhone sales than expected. With just 7% year-over-year growth in iPhone unit sales, the Street is concerned that Apple's largest and most profitable business segment may slow even further. Though shares have recovered slightly since, the stock is still looking enticing.

Still boasting the lion's share of smartphone and tablet global profits, Apple looks poised to continue to be a leader in mobile hardware going forward. And with Apple CEO Tim Cook promising new product categories this year, investors who buy shares now are getting a stock priced for very little growth with the added bonus of potential upside from new categories.

Then, of course, there's Apple's opportunity in China. With a recent arrangement to sell its iPhone at the world's largest carrier, China Mobile, Apple has greater access to the world's largest smartphone market -- a market IDC predicts to grow 20% and 10% year over year in 2014 and 2015, respectively.

Both powerful and proven brands in their respective industries, these companies are worth a closer look at these lower levels.