China is already the world's largest automotive market, and it's expected to remain one of the fastest growing for years to come. Consider that as vehicle sales rebounded last year the U.S. market reached 15.6 million units sold, which significantly trailed China's figure of more than 20 million. By 2020 some analysts expect China to top 30 million in sales, compared to estimates for America to reach just over 17 million. That means the race is on for any global automaker that wants to capture China's ridiculous sales growth on its top and bottom lines. Ford (NYSE:F) was late to the game in China, but is reaping rewards as it continues to invest in the region. For proof, just check out last month's rapid 67% growth.

By the numbers
Ford's sales last month in China reached 73,040 units, which was an impressive 67% growth over last year's figures. While it was a sequential decline, investors must keep in mind that seasonality plays a large role in the automotive industry and the rightful comparison is indeed to February of last year. 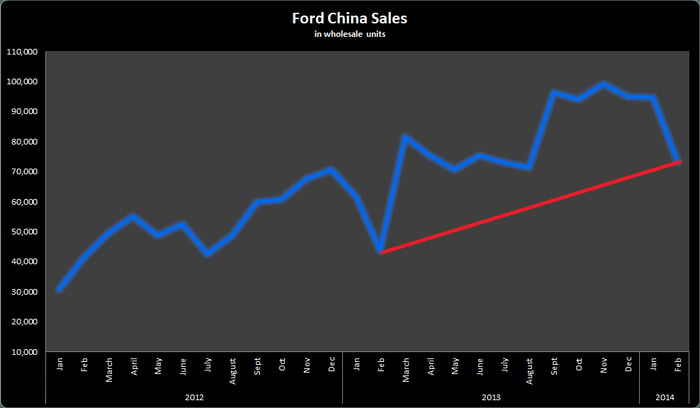 For the first two months of 2014 Ford's sales in China are up nearly 60% total, reaching 167,506 vehicles. A big driver of that number was Ford's passenger cars, which rose 88% last month. Ford's Focus continues to be in high demand after capturing China's best-selling nameplate title last year. Even better news for Ford investors is that its new vehicle launches continue to gain traction. Ford's Mondeo -- we know it as the Fusion -- posted sales gains of 123% to 7,755 last month, which is roughly one-third of the sales it garners in America.

Looking ahead, investors can expect Ford's rapid growth pace to continue as it launches new vehicles and expands its investments in China. Ford is partway through its goal of doubling its market share in China from 3% to 6% by launching 15 vehicles in the region through mid-decade. Sure, Ford doubling its market share will be a huge step forward for investors, but it still has a large hill to climb before reaching one of the region's most dominant competitors, General Motors, which has market share topping 14%. With demand rising for its new and current vehicles, Ford is cranking up production capacity to meet this demand.

"This is the fastest and most aggressive manufacturing expansion the company has undergone in 50 years," said John Fleming, executive vice president of Ford's global manufacturing in a press release. "The last time Ford was growing like this, Dwight D. Eisenhower was the U.S. president."

Ford currently has six major facilities under construction in its Asia Pacific region, with two in China starting production this year and an additional two in 2015.

Foolish takeaway
Because of its capital expenditure in the region investors can expect top-line revenues to grow, although bottom line profits will drag behind over the next couple of years. However, the growth potential is well worth the wait. Consider that the region, including China, is expected to represent 40% of company revenues by the end of the decade, compared to just 8% currently. When profits catch up to that growth it will be a huge bottom line contributor and a big win for investors of the Blue Oval.