Initial U.S. jobless claims fell 7.4% to 323,000 for the week ending March 1, according to a Labor Department report released today. That's the lowest level in three months as layoffs remain at pre-recession levels.

After claims increased a revised 4.5% the previous week, analysts were pleasantly surprised by this latest report, having expected 338,000 claims. 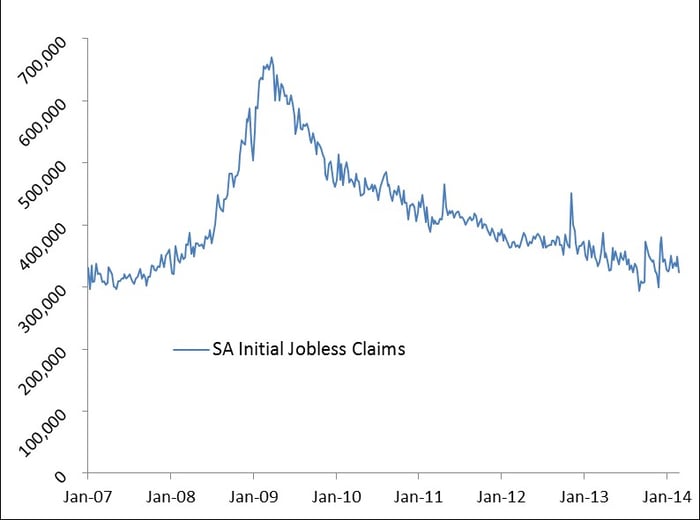 From a longer-term perspective, a 0.6% dip in the four-week moving average to 336,500 initial claims signals a respite from five consecutive reports of increases. Both the latest week's claims and the four-week average fall significantly below 400,000, a cutoff point that economists consider a sign of an improving labor market.

On a state-by-state basis, nine states recorded a decrease of more than 1,000 initial claims for the week ending Feb. 22 (the most recent available data). California's new jobless claims dipped the most, down 4,970, due primarily to fewer service sector layoffs.

For the same period, seven states registered increases of more than 1,000 initial claims. Georgia was the worst off, with claims up 7,380 due mostly to manufacturing, construction, and administrative and support services layoffs.

A total of 3.4 million Americans received unemployment benefits as of Feb. 15 (the latest period for which figures are available), down from 3.49 million the previous week.