Please ensure Javascript is enabled for purposes of website accessibility
Free Article Join Over 1 Million Premium Members And Get More In-Depth Stock Guidance and Research
By Justin Loiseau - Mar 7, 2014 at 9:49AM

New orders for manufactured goods fell 0.7% in January, according to a Department of Commerce report [link opens in PDF] released Thursday. After December's revised 2% drop in new orders, analysts had expected a slightly more subdued 0.5% decrease.

The weakness in both December and January was led by large declines in demand for commercial aircraft. 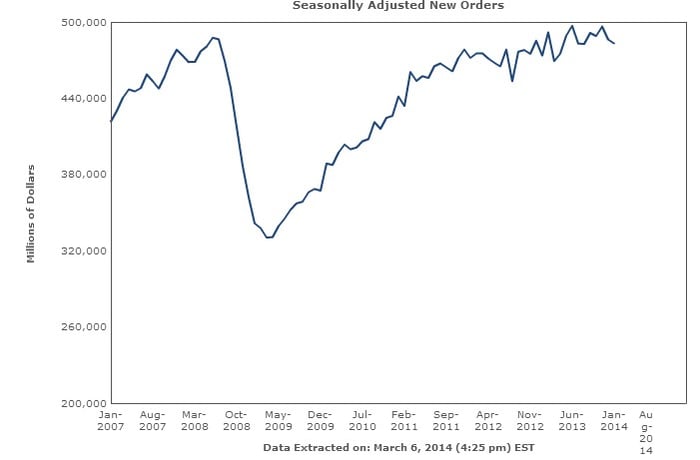 In a sign of potential trouble ahead, new orders for durable goods took a 1% cut for January. Investors use durable goods orders as a proxy for manufacturers' longer-term confidence in the economy.

While a portion of the January decrease is due to volatile aircraft orders, motor vehicles put on the brakes once again. After dropping 1.2% in December, new orders for automobiles and parts shaved off another 0.9%.

New orders for manufactured nondurable goods managed to squeak by with just a 0.4% decrease.

Unfilled orders remained at December levels, while shipments fell 0.3%. Inventories increased 0.3%, hitting an all-time high since data were first recorded in 1992. The inventories-to-shipments ratio, a statistic used to measure the sustainable flow of goods, edged up 0.01 points to 1.30.