Healthcare giant Johnson & Johnson (NYSE:JNJ) is one of the most diversified companies in the industry. While many identify the company with its notable consumer brands, which include Band-Aid and Neutrogena products,it always seems to have a steady string of wins coming out of its pharma division. That's welcome news for investors getting used to seeing falling -- rather than growing -- sales at Johnson's big pharma peers.

That's not to say Johnson & Johnson is immune to the patent cliff that's been eroding revenue at its competitors. It's just that its doing a better job pumping its pipeline full with rock-solid revenue producers able to offset the loss of exclusivity.

As a result, Johnson & Johnson's investors have been rewarded with a roughly 24% gain in the past year. So, let's dig a bit deeper into its drug unit for clues as to whether Johnson can reward investors this year, too. 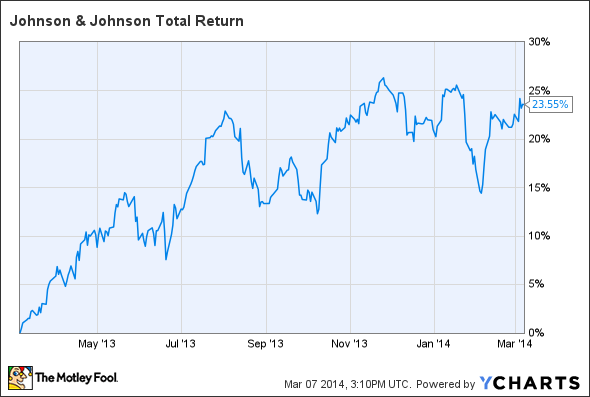 NASA-worthy product launches
Every drugmaker knows their top sellers have a limited shelf life. After all, patent expiration isn't a new phenomenon. As a result, companies like Johnson & Johnson spend billions each year on R&D. A lot of that money goes to projects that end up on the cutting room floor, but this company arguably does a better job either developing or acquiring successful drugs that hit the ground running.

One of those successes is Zytiga, the company's fast growing prostate cancer treatment, which J&J gained after acquiring Cougar Biotechnology in 2009. U.S. sales of Zytiga climbed 85% year-over-year to $211 million in the fourth quarter. Thanks to launches overseas, non-U.S. sales jumped 89% to $284 million, bringing global sales to $1.7 billion in 2013.

Another success is anti-coagulant drug Xarelto. Xarelto is one of three recently launched competing treatments challenging warfarin's decades-long stranglehold on preventing post-operating clots and cardiovascular risks. Sales of Xarelto, which competes against Boehringer's Pradaxa and Pfizer and Bristol's fast growing Eliquis, jumped from $239 million in 2012 to more than $860 million last year.

J&J's Stelara is winning too. Stelara won approval as a treatment for psoriasis in 2009, and its label was expanded last September to include active psoriatic arthritis. That helped Stelara's sales improve 47% to $1.5 billion last year.

Sales of the company's once monthly schizophrenia drug Invega Sustenna climbed 57% last year to $1.2 billion.  Some of those sales may have come at the expense of Eli Lilly's (NYSE:LLY) top selling Zyprexa, a daily medicine that produced more than $800 million in quarterly sales before losing patent protection. In the fourth quarter, U.S. sales of Zyprexa slumped 35%, reducing Zyprexa's global revenue to $348 million in the quarter. That poor performance reduced Zyprexa's sales to $1.2 billion in 2013, down substantially from $1.7 billion in 2012.

Investors should keep an eye on Invega Sustenna this year to see if it can continue to gain ground in the face of competition from Otsuka's once-monthly Abilify. Otsuka and Bristol, its partner on the original formulation, sold more than $5 billion worth of Abilify last year. While Bristol doesn't share in sales of the once-a-month formulation,  Otsuka hopes to offset lost sales when Abilify loses patent protection in 2015. Despite competition from Abilify, Invega Sustenna may still have room to grow given once-a-month anti-psychotics represented just 10% of the $20 billion in atypical anti-psychotics market as of early 2013.

The next generation of successes
More than $2.27 billion worth of sales went off-patent at J&J last year, and its multibillion blockbuster Remicade loses protection in Europe in 2015, putting $2 billion in annual sales at risk to recently launched biosimilars from Hospira (NYSE: HSP). J&J's Remicade remains under patent protection in the U.S. until 2018; however, the company will be looking for its latest class of new drugs to offset any sales lost to Hospira this year.

One of those promising new compounds is Imbruvica, which J&J co-developed with Pharmacyclics (NASDAQ: PCYC). Since November, the two have won the FDA go-ahead for both mantle cell lymphoma and chronic lymphocytic leukemia.  Analysts project that sales of Imbruvica could eventually reach an annual peak of $1.8 billion.

Fool-worthy final thoughts
J&J continues to pump money into research. Last quarter, it spent more than $2.4 billion on R&D. That's more than the company has spent in any quarter during the past ten years. 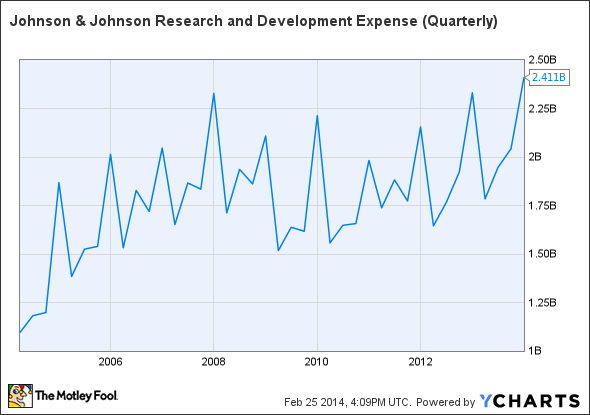 That spending is paying off with fast growing drugs (many of whom are already blockbusters) like Zytiga, Xarelto, Simponi, and Stelara.  If Imbruvica, Invokana and upcoming therapies across rheumatoid arthritis, psoriasis, depression and pre-metastatic prostate cancer can live up to their billing,  J&J may indeed have one of the best pharma divisions in the industry today.

Editor's Note: The EU patent expiration year for Remicade and the indications for Simponi and Stelara were incorrect in a previous version of this article. The Fool regrets the errors.