Few companies are as synonymous with the service they provide as eBay (NASDAQ:EBAY). Yet, while eBay is definitely well known, it's often thought of as a second fiddle to e-commerce leader Amazon.com (NASDAQ:AMZN), rather than being a strong investment on its own right.

What you may not know about eBay
Believe it or not, well established businesses can grow faster than small and trendy one's. The key is finding businesses that have a unique competitive advantage, that all-important moat that Warren Buffett is always talking about.

Here are three things that give eBay a unique moat.

eBay's marketplace is only half its story

One of the biggest misconceptions about eBay is that it's simply an auction site compared to Amazon, which sells electronics and services, and that's simply not true. PayPal, one of the most widely used online payment tools, makes up 35% of eBay's revenue. By comparison, the traditional Marketplaces make up 37%, and that added value gives eBay two of the top brand names in e-commerce.

Activist Investor Carl Icahn recently called for eBay to spin-off PayPal, because PayPal is so successful. While the traditional marketplaces are growing, PayPal is growing faster,  churning out 19% revenue growth in its most recent quarter, and for the year. 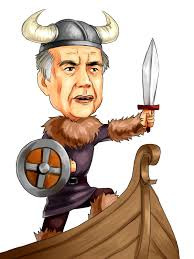 Image of Carl Icahn as a "Corporate Raider" courtesy of Flickr, Keith Meister

Regardless of what happens, if you own the stock now you are likely to win. If eBay keeps PayPal, it keeps a great business that is synonymous with a surging industry (online payments); if eBay spins it off, you'll get value by owning PayPal shares.

In short, soon shareholders could see the PayPal business overtake Marketplaces in terms of value.

eBay sells much more than iPods and Sweaters
There's no question that Amazon is the top dog in online purchases of electronics, games, and other household items. However, I think sometimes the breadth of goods that eBay sells is overlooked. These days eBay sells auto's, and real estate, which is a service its competitors don't offer.

Believe it or not, eBay sells over 4,000 homes every month and has an audience of 140 million buyers. Why does this matter? Well, when someone sells real estate on eBay obviously they need to create an account, and they'll be more likely to buy that iPod or sweater.

In my opinion, selling more goods to a wider audience is an advantage.

eBay is a start-up gone right
Despite its current conglomerate status, eBay's beginnings are very humble in nature. Started essentially as a hobby by founder Pierre Omidyar, the company was known as "AuctionWeb" until 1997, and only had about thirty employees the year it went public. In many ways the company went from "side project" to billions over night.

Why is this worth mentioning? Well, it seems to me that eBay is often thought of as either not "disruptive" enough to compete with Amazon, or too big to offer the upside of  Overstock.com. We forget that Mr. Omidyar's side project disrupted many different industries, and established the market for wide-spread online retailing, while Amazon focused largely on books.

This isn't a slow company, it's not a utility. It's a company that is growing, with a wide net (autos, real estate, PayPal) to collect revenues in, and it's an innovator and leader in e-commerce. Even its traditional Marketplaces saw 4.6 million new users in eBay's most recent quarter and 13% revenue growth. Why wouldn't eBay be considered a hot investment?

Foolish conclusion: Think like an owner
Foolish investors should challenge the conventional methods of stock picking. A common narrative is that e-commerce is a zero sum game, if you go by that logic then Amazon is the only stock you can buy.

I believe the growth of e-commerce, coupled with eBay's powerful brand, should lead you to consider both companies in your portfolio. You can own more than one!

If you owned a private business with a great brand, and strong trends at its back, you'd be as happy as a clam. That's what eBay offers, and it looks like the stock is much "hotter" than it appears on the surface.