There are over 70,000 pizzerias in the U.S. and thousands more throughout the world. Despite the highly fragmented nature of the pizza business and the intense competition at the top among the biggest chains in the world, which include Yum! Brands' (NYSE:YUM) Pizza Hut and Papa John's (NASDAQ:PZZA), Domino's Pizza (NYSE:DPZ) had another superb year in 2013.

Despite a total share price return of over 1,100% over the past five years, Domino's Pizza can still climb much higher. Furthermore, expect Domino's Pizza to continue delivering positive results in all environments.

Domino's Pizza or Pizza Hut? By Bidgee, via Wikimedia Commons

Latest earnings and outlook for Domino's Pizza
Domestic same-store sales for Domino's Pizza in the fourth quarter of 2013 rose 3.7% while jumping 5.4% for the full year. However, the chain saw greater success abroad as international same-store sales climbed 7% for the fourth quarter -- which marked the 80th straight quarter of positive international sales growth.

Internationally, Domino's continues to expand while not relying on any single region. The company now has at least 500 locations each in the United Kingdom, India, Mexico, and Australia. Management now estimates that same-store sales growth for 2014 will be 2%-4% domestically, but 3%-6% internationally.

Domino's delivers in multiple environments
Unlike many other restaurant chains, Domino's Pizza provides a product that translates well internationally. Pizza seems to have an excellent following throughout the world. Similarly to Domino's Pizza, Papa John's has also had success globally with its revenue and income increasing to $1.4 billion and $69.5 million, respectively. Likewise, Pizza Hut has been carrying the weight for Yum! Brands in China as KFC recovers from its poultry problems of 2012.

Severe winter weather seems to have only helped Domino's Pizza. Unlike other major chains like McDonald's and Panera Bread and even smaller chains like Potbelly, all of which cited bad weather for their recent lackluster sales, Domino's has benefited from the snow.

The digital environment has also been a blessing. The web has given leverage to the larger pizza chains and slowly pulled customers away from smaller mom & pop pizzerias. In 2013, large pizza chains accounted for 52% of all pizza orders -- up from 47% in 2009. Because 90% of the Domino's Pizza business now takes place over the phone or a web-based system, this lets the company connect to far more customers than smaller independent pizza shops can reach.

On top of that, the partnership with Ford and its Sync app, which allows customers to order pizza while driving home from work without using their hands to order, gives Domino's Pizza an edge even among its closest competitors.

Additionally, the sporting environment continues to benefit Domino's Pizza. While NCAA basketball's March Madness is just around the corner, don't ignore last month's Super Bowl. Domino's Pizza had expected to sell over 11 million slices of pizza Super Bowl Sunday on an 80% increase in orders. Super Bowl sales results will be factored into the company's first-quarter 2014 earnings and the stock could see a spike. 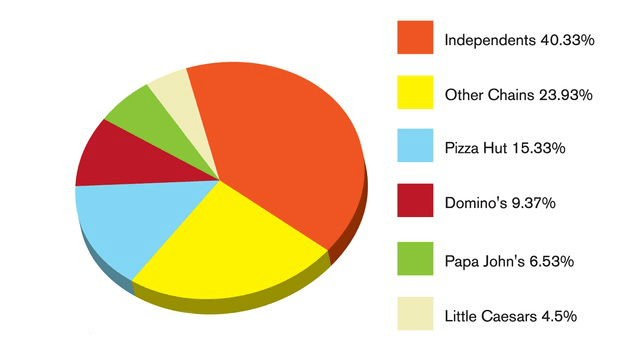 Pizza Hut dropping the ball in the U.S.?
The only chain preventing Domino's Pizza from reaching the top spot in the U.S. in terms of sales and unit size is Pizza Hut. However, that lead is slowly narrowing.

Despite the success Pizza Hut has had abroad, domestically the chain has struggled recently. Same-store sales declined  2% in 2013, while they fell 4% in the fourth quarter.

Furthermore, Pizza Hut is trying to address a PR situation that occurred in West Virginia a few weeks ago when a video went viral which revealed a district manager urinating into the same sink that the restaurant used to wash dishes.

The backlash will likely be temporary as Domino's Pizza faced a similar situation in 2009 when an employee picked his nose and placed its contents into the food he was making. However, Pizza Hut's case may be different as the chain can not really afford to have a situation that may accelerate its declines domestically -- especially with the momentum Domino's Pizza has been gaining as the go-to pizza delivery brand.

Bottom line
In 2011, the average American ate 33 pounds of cheese, up from just eight pounds nearly 60 years ago. Trends like this benefit all pizza chains. However, the fact that for the first time ever there are more cell phones than human beings on Earth will benefit major players like Domino's Pizza as consumers increasingly order their food using digital means.

Bad weather continues to plague not only most of the restaurant industry, but the majority of retail as well. However, while most retail purchases like clothes, electronics, cars, and even homes are often delayed and not lost, what has been eaten has been eaten. In short, smaller pizzerias will not be able to make up their lost sales and larger chains like Domino's Pizza will continue to slowly take up a greater slice of the overall pizza-industry pie.

By Stulli, via Wikimedia Commons