Five years ago, the stock market hit its lowest levels of the 2008 and 2009 bear market, and since then, the S&P 500 (SNPINDEX:^GSPC) has soared more than 1,200 points. But rather than focusing only on the performance of stocks since the worst of times during the financial crisis, the fairer way to judge the best stocks in the market is to include both the huge declines after the market's last record highs in late 2007 and the ensuing recovery from the bear-market lows. When you look at S&P 500 stocks that way, Netflix (NASDAQ:NFLX), priceline.com (NASDAQ:BKNG), and Alexion Pharmaceuticals (NASDAQ:ALXN) rise to the top, joining Regeneron Pharmaceuticals (NASDAQ:REGN) and its impressive five-year performance. 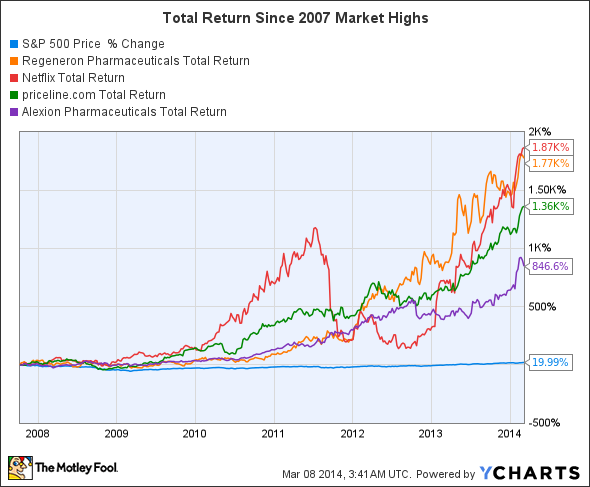 One lesson you can learn from these four stocks is that in certain industries, general bull- and bear-market cycles don't really have a big impact. The pharmaceutical and biotech sector is definitely one where company-specific developments are far more important than what's going on in the overall market. For Alexion, the success of its Soliris drug, which was approved by the FDA and its European regulatory counterpart in 2007, has proven to be the small company's primary growth driver. Even though Alexion has since acquired its asfotase alfa clinical-stage treatment for hypophosphatasia, Soliris remains a huge part of the company's strategy for the future, with the potential for expanded indications. Meanwhile, for Regeneron, the approval of Eylea to treat macular degeneration had the same effect on its stock. Yet because Regeneron's success came after the bear market had ended, one could mistakenly conclude that its success was somehow tied to the broader market's recovery rather than its own success.

Even with Netflix, you can see how little the bear market affected the path of the best growth stocks. Netflix actually gained ground during 2008, even as the market plunged 37%. Its rises and falls were tied almost entirely to its own individual performance, with growth potential in streaming video sending the stock higher, miscues related to its changing business model sending it plunging, and a renewed sense of its core purpose leading it back to all-time record highs again.

Meanwhile, priceline showed that even stocks that were hit hard in the bear market still had the potential to recover. The travel portal started regaining ground before the market hit bottom in March 2009, with its shares actually hitting bottom the preceding December. Combined with the fact that the company's stock had continued to climb almost until mid-2008, priceline's overall performance showed the staying power of its business model and the competitive advantages it has built against its online-travel peers.

It's not enough to judge a stock based on half a market cycle. Only by observing how a stock acts in bull and bear market can you get a true sense of whether they're truly amazing.