The race to the title of best-selling vehicle in America is a heated one, although one that Ford's (NYSE:F) F-Series has largely dominated over the years. The F-Series' main competitor to the crown has been General Motors' (NYSE:GM) Chevrolet Silverado, and the two duke it out for the most loyal consumers in the industry. Funny thing is, all the sudden the race has a third player coming from behind which is on pace to shake things up. Here are the details, and whether I think Fiat Chrysler Automobiles' (NASDAQOTH: FIATY) Ram Truck will indeed keep pace and overtake the Silverado in 2014.

Ram accelerates in 2014
Let's first look at what the Ram truck has accomplished during the first part of 2014. Last month, Ram brand sales for Fiat Chrysler Automobiles, or FCA, the combined company of Chrysler and Fiat, soared 28% over last year and remains up 26% for the year. Ram's sales last month were good enough to record its best February mark since 2006 and its 46th consecutive month of year-over-year sales gains.

While sales increases of 28% and 26% for February and 2014, respectively, from Ram are impressive, let's look at how they stack up versus the competition and what we can expect to happen throughout 2014.

Ford's F-Series sales improved a meager 2.6% in February and are up only 1.1% for the year which seems disappointing until you check General Motors' results. Sales of GM's Chevy Silverado were down 12% in February and are down a whopping 15% so far this year – ouch. If those results continue, the Ram is on pace to shake up the sales rankings. 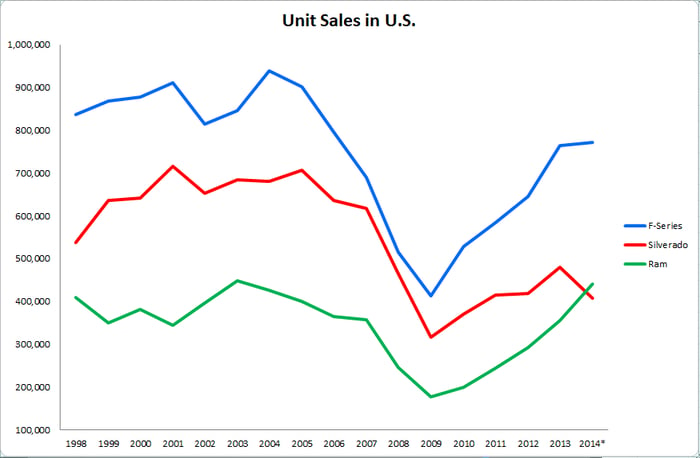 However, winning and losing in the full-size truck segment goes beyond sales, investors and car buyers must take incentives into account.

All about the incentives
Ford reported this week that its incentives per truck remained at historic norms, roughly $4,000 per truck, while General Motors has so far kept its incentives below normal. That's a strategic move for General Motors, as it has the freshest designed trucks on the market and which typically leads to higher transaction prices as well as fewer incentives to achieve sales -- a more profitable move.

So while sales of the Silverado are down, profitability is up, albeit at the cost of market share. The big question is whether the Silverado is good enough to lure customers from the F-Series and Ram without increasing incentives, and not everyone is convinced. When speaking of GM's new trucks to Reuters, Kelley Blue Book analyst Alec Gutierrez had this to say.

"They are only marginally better than Ford's previous generation truck and the new Ram," according to Reuters, he added that there was no reason to suggest a consumer should pay a premium for the Silverado.

With that said, and taking current trends into account, will the Ram keep this sales pace up and overtake the Silverado in 2014? I don't think so.

Looking ahead
The first two months of 2014 perhaps served notice to GM that its trucks aren't competing as well as hoped. Because of that, General Motors is now unleashing its steepest and most aggressive incentives on the new Silverado to date. During March, dealerships will offer truck buyers employee and supplier pricing for anyone willing to drive the truck off the lot. That means you can expect a strong surge in Silverado sales this month, and that alone could abruptly reverse Ram's growth in 2014.

Further, while Ram certainly surged early in 2014, it may have surged at the wrong time, considering January and February are historically very poor selling months. March is historically a very strong selling month, and it also boasts five weekends on the calendar this year. GM and Ford have the ability to regain lost market share more quickly during the stronger selling months later this year.

Further, the competition is about to heat up even more as Ford's next-generation 2015 F-150 hits the markets. Ford's truck buyers have historically been the industry's most loyal, and with the F-150's improved fuel economy it is sure to garner a large amount of sales later this year. I believe those factors will prevent the Ram from overtaking the Silverado this year, although let the warning be served: This is no longer a two-truck race.