Office supply stores are going the way of the dinosaur.

On Thursday, Staples (NASDAQ:SPLS) said it will close 225 stores in North America over the next two years. According to its chief executive officer Ron Sargent:

Now I want to make it clear that we're not getting out of the retail business. Our stores are an important differentiator versus the competition. They are a key part of our omni-channel strategy, and we know customers appreciate the convenience and service stores provide. That said, stores have to earn the right to stay open, and we are committed to making tough calls when it's necessary.

The closures will reduce Staples brick-and-mortar presence in North America by almost 15%. As of Feb. 1, it operated 1,515 retail locations. Two years from now, there will be only 1,290. This is slightly more than it had in 2005. Here's how Sargent explained the move:

The performance of our retail stores has consistently fallen short of our expectations over the past few years, and we continue to see customer demand shifting online. As a result, we will take more aggressive action to right-size our retail footprint and create an organization that is better positioned to respond to the changing needs of our customers.

For the record, Staples generates roughly half of its sales online. And it's this fact that may end up being the company's saving grace, as competitors including Office Depot (NASDAQ:ODP) have lagged on the e-commerce front.

You can see the impact of this on the companies' stock performances. While both companies have struggled under the weight of new competitors and migrating sales patterns, Office Depot (which, for the record, is the surviving entity from a merger with OfficeMax) is faring much worse. 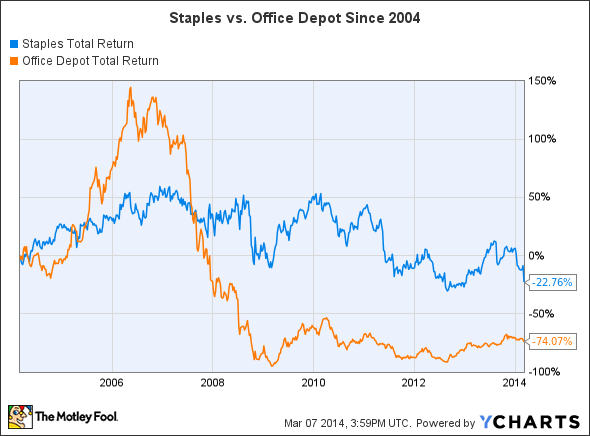 Over the past decade, Office Depot's shares (adjusted for dividends and buybacks) are off by 74%. By comparison, Staples' shares, while lower, are down by only 23%. A small consolation to be sure, but a consolation nonetheless.

Despite this, the market's reaction to Staples' news speaks for itself. On Thursday, the day of the announcement, investors and traders sent the office supply company's stock down by more than 15%. It was a bloodbath, bringing to mind analogies to RadioShack -- which is, without a doubt, in the process of closing up shop.

Is such an analogy fair? Probably not, but only time will tell.