Apple (NASDAQ:AAPL) stock could hit $635 in 12 months, says Pacific Crest Securities analyst Andy Hargreaves. That would give investors an 18% return at today's prices. His reason for the bullish outlook? A 4.7-inch iPhone with a subsidized price of $299, $100 more than the price for the iPhone 5s. While his speculation is certainly bold, the underlying assumptions are reasonable.

The case for a larger iPhone
There have been rumors that Apple is, indeed, developing a larger iPhone to launch in another bifurcated iPhone product release this fall. While it seems difficult for iPhone users to imagine a larger iPhone, designer Sam Beckett recently made an excellent case for the device in a concept video, dubbing the smartphone iPhone Air.

Despite the concept phone's 17% larger display than the 4-inch iPhone models, the actual phone in the concept is just 8% larger than the existing iPhone 5s. Designing with circulating rumors in mind, Beckett assumed that side bezels and the top and bottom of the frame could be slimmed down thanks to a sapphire crystal display.

Hargreaves believes Apple could position the iPhone Air as a more expensive device than the current iPhone 5s pricing. The fact that Apple's cheaper iPhone 5c didn't have an adverse effect on iPhone 5s sales, he says, is a sign that consumers are willing to pay more for premium smartphones. The notion goes entirely contrary to the industry trend to sell cheaper smartphones.

How Apple gets to $635
Hargreaves justifies the $635 price target by saying that the more expensive iPhone could reasonably capture 10% of the existing jumbo-sized phone market (smartphones larger than four inches) and add as much as $4 in earnings per share in 2014. That would boost EPS by about 9%. At $635, Apple stock would trade at a price-to-earnings ratio of 14.3, slightly higher than its price-to-earnings ratio today of 13.3. 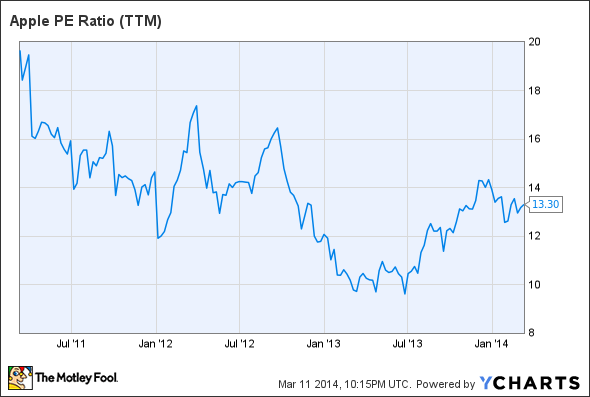 While Hargreaves makes some good points about a larger iPhone and its meaningful potential on Apple's bottom line, there is a broader takeaway for investors from Hargreaves analysis. His scenario highlights the low downside risk to the value proposition for Apple stock at these conservative levels. Really any significant new product with meaningful success could positively impact the stock. And investors are in the fortunate position to know that the company is introducing new product categories, thanks to comments form Apple CEO Tim Cook. That said, Hargreaves price target of $635, in light of a rumored iWatch, revamped Apple TV, and a larger iPhone, seems sensible.

Of course Foolish investors shouldn't think in terms of twelve-month price targets, instead opting for an even longer-term time horizon. But the risk profile outlined for this market leader by Hargreaves is certainly enticing.