Some passengers that had to endure the Carnival Triumph nightmare referred to the ship as a floating toilet. As a whole, Carnival (NYSE:CCL) is not a floating toilet. The primary reason for the 'floating toilet' reference: overflowing sewage. Sometimes incidents like this can lead to an investing opportunity because the stock price is unfairly punished based on recent events that are likely to online have a short-term impact on the underlying business. Is this one of those situations?

In addition to having to deal with overflowing sewage, passengers had to deal with limited food and no power. There were a total of 3,143 passengers on the Carnival Triumph, and several dozen of them are now suing Carnival for between $30,000 and $1 million in damages. Even if all of these former passengers were to win, this wouldn't have a long-term impact on Carnival.

On the other hand, this news being brought back to the surface doesn't help Carnival's reputation. For instance, imagine you didn't follow what went on in the cruise line industry and you were planning a cruise for this summer. If you stumbled upon this news and learned about this somewhat-recent incident, then you would likely opt for another cruise line such as Royal Caribbean (NYSE:RCL) or Norwegian Cruise Line (NYSE:NCLH).

Furthermore, while Carnival states that the equipment on the Carnival Triumph was properly maintained and that inspectors deemed the engine fire that started this mess to be an accident, Judge Donald Graham ruled that Carnival had been negligent in maintaining equipment in a pre-trial ruling. This also doesn't help Carnival's reputation.

Carnival passengers told horror stories of their five days at sea, approximately 250 miles off the Mexican coast. While dealing with the challenges mentioned above, there was no air-conditioning while the passengers experienced constant heat, and children clung to their parents in fear while other passengers couldn't find their friends to confirm that they were safe.

Carnival offered a full refund to every passenger, a free trip, and $500. Full refunds were the correct course of action. Offering the $500 was generous. However, it's logical to assume that most passengers won't take advantage of the free Carnival cruise. Some of them will never go on another cruise for the rest of their lives after such a traumatic experience. At least Carnival got everyone home safely.

Now that the situation has been established, what effects has it had on Carnival financially? Should Carnival now be seen as a bargain, or does Royal Caribbean or Norwegian Cruise Line offer a better investment opportunity?

Numbers and charts
Most investors look at valuation before anything else. That being the case, let's see how Carnival looks in comparison with its peers in this regard.

One of the best ways to determine whether or not a company's management is efficient is to see if its revenue is outpacing its SG&A expenses. With that in mind, consider the one-year chart below: 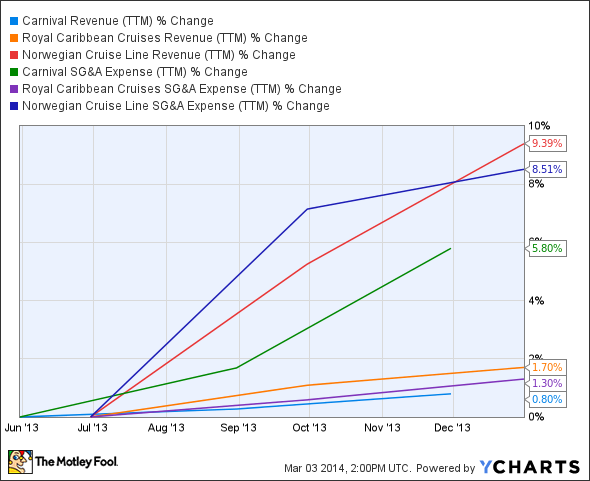 Carnival does offer a dividend yield of 2.50%, which is more generous than Royal Caribbean at 1.90%, but considering the other factors -- PR challenges and lack of efficiency -- that shouldn't be enough to lead investors in Carnival's direction. Note: Norwegian Cruise Line doesn't offer a dividend yield, which is expected since it's reinvesting its capital in its growth.

Carnival does have one advantage -- it generated an impressive operating cash flow of $2.83 billion over the past year. Therefore, Carnival is capable of a turnaround. It can use this capital for marketing, ship refurbishments, increased capital returns to shareholders, and more.

The Foolish takeaway
Carnival has the potential for a turnaround, but right now it lacks efficiency and is dealing with major PR challenges. These headwinds have the potential to work against Carnival for the foreseeable future. Norwegian Cruise Line is growing the fastest of the three, but it's also the most expensive, or riskiest, investment. Royal Caribbean falls somewhere in the middle as it offers moderate growth potential, efficiency, a somewhat generous yield, and a fair valuation. Please do your own research prior to making any investment decisions.