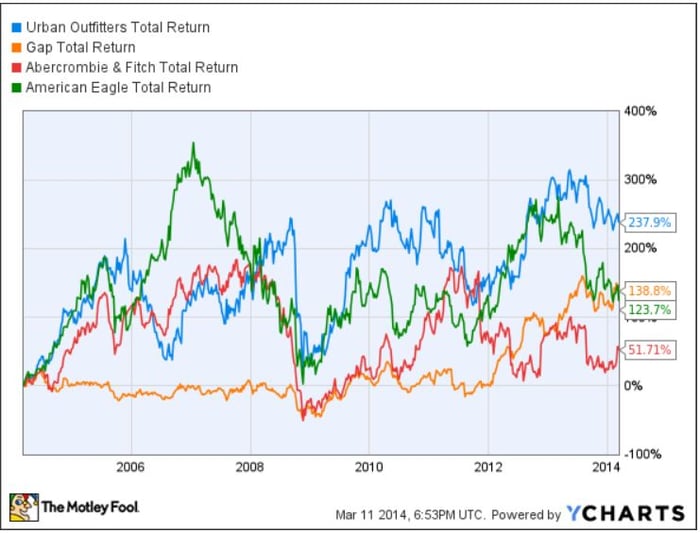 Apparel retailers specializing in teens and other young customers, such as Gap (NYSE:GPS), Urban Outfitters (NASDAQ:URBN), American Eagle Outfitters (NYSE:AEO), and Abercrombie & Fitch (NYSE:ANF), are going through a really challenging period, as customers seem be keeping their wallets closed and the competitive landscape is becoming increasingly aggressive.

Still, uncertainty usually creates opportunity for investors, so let's look at these companies to see whether any of them could turn out to be a convenient purchase for investors looking to buy fashionable companies at discounted prices.

Abercrombie & Fitch's questionable turnaround
Abercrombie & Fitch is facing serious difficulties as the company's products are falling out of favor with customers and its brands are losing power. However, the stock has risen by more than 20% in the past month, as investors seem to be gaining confidence in the company's chances to implement a successful turnaround after reporting better-than-expected earnings for the quarter ended on Feb. 1.

But it's far too early to identify any signs of a sustainable turnaround at Abercrombie. Total comparable sales declined by a worrisome 8% at the company level, with both the U.S. and international markets showing big declines during the period. Total revenues fell by 11.5% during the quarter as the company is also closing stores to streamline operations.

Cost cuttings can only go so far. Unless Abercrombie & Fitch proves that it can reinvigorate its brands and reverse the declining sales trend, the company is a very risky proposition for investors.

American Eagle can't fly
American Eagle is in a similar situation, only that the sales declines aren't as big as Abercrombie's. The stock was falling by nearly 7.8% on Tuesday as American Eagle announced a decline of 7% in both total sales and comparable store sales during the 13 weeks ended on Feb. 1.

Increased promotional activity and the higher impact of fixed costs on a reduced sales volume delivered a double hit to profit margins, so earnings per share fell by a whopping 51% annually, from $0.55 per share in the same period of the prior year to $0.27 per share in the last quarter.

Closing the Gap
Gap is more globally diversified than Abercrombie & Fitch and American Eagle, and the company has a broader clientele. This typically means more stability for Gap versus the competition, and the company managed to report a 1% increase in comparable-store sales for the quarter ended on Feb.1 in addition to better-than-expected earnings-per-share figures during the quarter.

A single month does not make a trend, but investors need to monitor performance carefully in the middle term to see whether February was just a particularly tough month for Gap or the beginning of something more serious and permanent.

Urban Outfitters outperforms in a tough environment.
Urban Outfitters was falling by 5% on Tuesday as the company´s sales came in below expectations. On a brighter note, weakness was contained to the Urban Outfitters brand, while Anthropologie and Free People are still doing remarkably well considering industry conditions.

Profit margins rose during the period, mostly thanks to improved mark-down rates in the Anthropologie brand. Urban outfitters delivered record net income during the quarter, and earnings per share of $0.59 came in comfortably above analyst's estimates of $0.55 per share.

Management remains cautious about the outlook, though, which is quite understandable considering the industry environment.

Bottom line
Sales are falling steeply at Abercrombie & Fitch and American Eagle, so investors need to be especially careful about these companies. Gap delivered a concerning sales decrease in February, but the company is usually more stable than its peers, so it could be only a transitory slowdown.

As for Urban Outfitters, the company is clearly outperforming when it comes to both sales and profitability, and it's looking like the most solid candidate in the sector for investors looking to take an opportunistic contrarian position in teen retailers at a convenient entry price.