A new survey showed Pandora leading streaming services in listeners. But what does that mean for the company's ability to stay ahead of Spotify?

Pandora ( P ) tops a new survey that asked respondents aged 12 and older which streaming service they listened to in the past month. The survey included mentions of the newly launched services from Apple ( AAPL 2.28% ) and Microsoft ( MSFT 0.01% ), and Pandora's direct rival Spotify. But leading the market only matters if it comes paired with increased monetization.

The survey in question comes from Edison Research's annual Infinite Dial study. Pandora led the audio-streaming companies, with a 31% market share, by a large gap, with ClearChannel's iHeart Radio's second-place finish with 9%. But Pandora actually loses money on an increased number of listeners due to royalty fees -- unless those listeners can become monetized through advertising.

Additional data from the survey suggests Pandora has a better shot at monetization than Spotify.

Leader of the pack
Here's a look at the overall Edison Research survey data, provided in an infographic form via Statista. 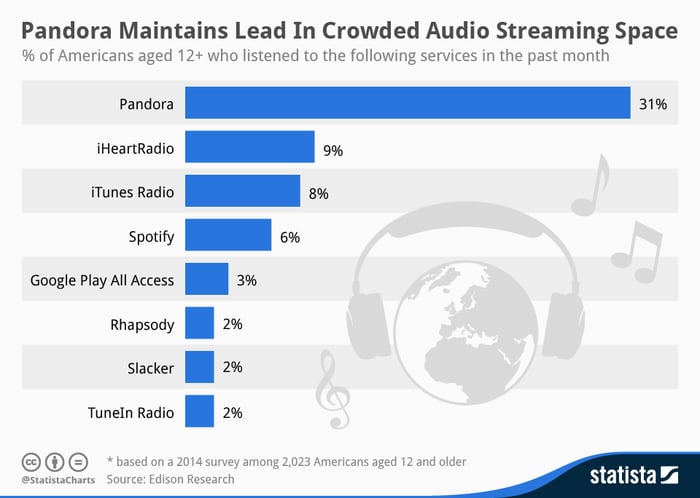 It's important to view these results as a generalization rather than the gospel truth of Pandora's market share for a given month. But for the sake of argument, let's say the data does show Pandora's actual share of the streaming market. What would that mean for the company?

Leading the pack means that Pandora is bleeding out even more revenue through royalty acquisition costs. According to a Wall Street Journal report last year, Pandora pays out about 0.12 cents per listen. That figure comes in below the reported 0.13 cents per listen for Apple and the 0.14 cents for Google. But Pandora's overall revenue is also a lot lower than those tech giants. Spotify uses a more complicated royalty formula that includes weighing a song's popularity over a period of time compared to the company's entire streaming catalog. But Spotify claimed in December that the average payout per listen was about 0.6-0.84 cents.

I previously went into detail about how Pandora needs to improve its advertising revenue per thousand listener hours, or ad RPMs. This metric aims right at the heart of the business: how much Pandora can make, monetizing its users through advertising. Remember, Pandora can't monetize through listening alone, due to the royalty fees per listen.

Ad RPMs have improved steadily on mobile platforms, but traditional computers had a shaky couple of years before recovering last year. The Edison Research data also shows why Pandora might have a better shot at monetizing its users than Spotify.

Why could Pandora beat Spotify?
Let's get a basic truth out of the way first: Pandora isn't competing with streaming services from Apple and Google. It might look that way since the products bear similarities, but Google and Apple can take losses in streaming in hopes of moving more mobile devices or proprietary music purchases. And iHeartRadio has a multichannel reach, including video game console integration. It is more a distributor of radio stations than a traditional streaming service.

So Pandora only competes with Spotify, once the services are stripped down to the basics. And some demographic information released by Edison Research shows why Pandora could win this fight.

Still here? Okay, the point of all those numbers was that the 18-34 demographic is the key audience for streaming services. And a whopping 84% of that demographic were aware of Pandora's existence, compared to 44% for Spotify: 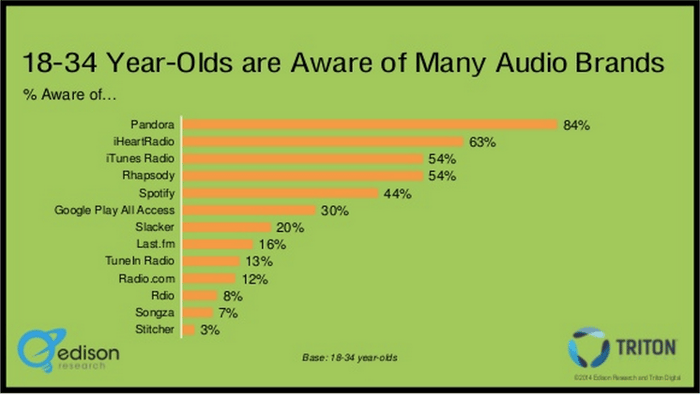 Awareness of a service doesn't directly equal use of said service -- but it's a vital first step. And Edison provided additional data showing that 47% of streaming listeners in this key demographic had listened to Pandora in the prior month, compared to 11% for Spotify.

So there's awareness and usage dominance, both of which would entice advertisers targeting that particular demographic. And it's a popular demographic to target, since the below-18 set tends not to have as much spending money to purchase the advertised items.

Foolish final thoughts
Actual metric data will remain sparse for Spotify unless the company does finally push for an IPO. Surveys such as Edison's provide an interesting look into the demographics listening to the streaming services. Pandora might not beat Google or Apple, but there's a strong chance of it staying ahead of Spotify.