The banking industry is changing -- and in no area has this become more apparent than in how customers interact and communicate with their bank. It'll be the job of banks to predict and adapt to these emerging preferences. And, already we've seen opposing strategies as many are repositioning and scaling back branch networks, while others are expanding.

There's no greater juxtaposition than Wells Fargo (NYSE:WFC), with over 6,000 branches and BofI Holdings (NYSE:AX) with zero. Today I'll dig into which bank is best positioned to gain from the shifting landscape.

The most popular channels
According to Gallup, "The BRATMO (branch-ATM-online) trifecta still defines the core of day-to-day banking." Whether customers need to make deposits, withdraw cash, manage accounts, pay bills, one of these three channels can accomplish the task. 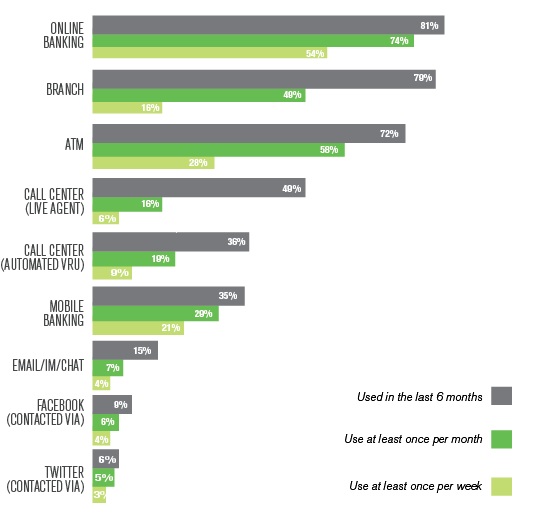 Gallup noted, "nearly half (46%) of customers have used all three of these [BRATMO] channels over the past six months." More importantly, the study suggested that these customers -- when compared to those using alternative channels -- "generate an estimated $155 more in profit per year to their primary bank."

Based on these statistics, there's no question Wells Fargo is in the driver's seat. The bank has an online channel, as well as the largest U.S. branch network, and more than 12,000 ATMs.

The story for Bank of the Internet is better than it seems. The most popular channel, online, is covered. Call centers get a bad rap, but there's no reason to believe these cost-efficient options can't be just as effective as branches. BofI also reimburses customer's ATM fees, so in reality, it has a larger ATM network than Wells Fargo.

Will technology change the banking landscape?
I think it already has. Branch visits have been on a steady decline. According to Gallup, from 2012 to 2013, customers consistently using mobile banking, "increased by 11 percentage points." Not surprisingly, the lion-share of mobile banking users are Millennials (born in the early 1980s to early 2000s).

These are the customers that Bank of the Internet will attempt to snatch up. The question is: will Millennials search for a more traditional banking experience as they age? And in my opinion, that answer is no. I believe they will continue to do what they've always done.

This is a fact Wells Fargo CEO John Stumpf is familiar with. Stumpf, however, has suggested that while younger customers are less likely to visit branches regularly, most customers, regardless of age, tend to open their accounts in a branch.

This is why Wells Fargo has been testing out "neighborhood stores." These smaller locations more efficiently serve lower amounts of traffic, while still functioning as much like a normal sized branch.

The bottom line
From every conceivable angle, the future is favoring BofI's model. I thought it was impossible to have strong margins with high cost deposits, or make good loans without boots on the ground. But BofI has accomplished both of those feats.

With that said, I'm still favoring Wells Fargo and here's why:

A majority of today's banking customers still appreciate having a brick and mortar bank. And those more lucrative customers aren't going anywhere just yet. The banking industry will significantly lag the progress of technology, giving the well-capitalized Wells Fargo plenty of time to adapt. Wells Fargo also has a network for more consistently collecting deposits.