If there's one fertilizer stock that brilliantly rode over the storm that the industry has had to face over the past few quarters, it's CF Industries (NYSE:CF). While rival stocks are just about crawling back to their feet after a turbulent ride last year, CF Industries shares hit 52-week high last week.

The outperformer beat peers handily over the past one year, returning 25% (including dividends) even as PotashCorp (NYSE:POT), Mosaic (NYSE:MOS), and CVR Partners (NYSE:UAN) shares lost 14%, 19%, and 16%, respectively. More notably, CF also just surpassed the broader market in its race to the top. Take a look. 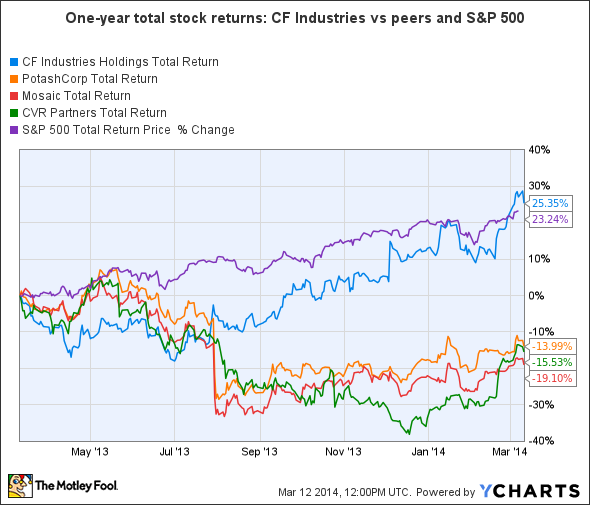 So what's working for CF Industries that isn't for the other fertilizer companies? Or has the market jumped the gun on the stock? It's time to dig deeper and find out.

Nothing remarkable here
The market generally sends a company's shares up when the company performs well operationally. How does CF Industries score on that count? 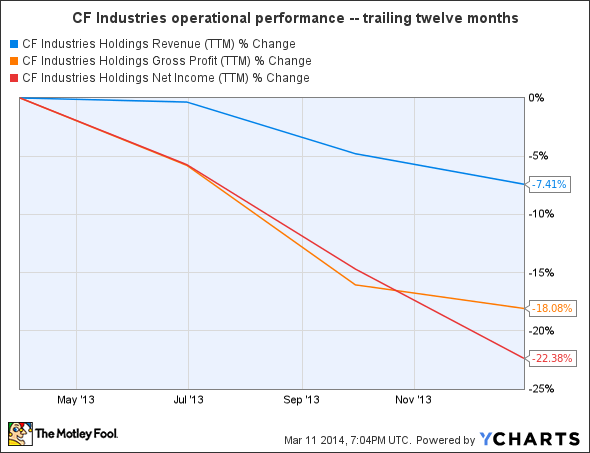 Now that certainly isn't the kind of chart you would expect to see from a company that has seen its stock ride so high over the past year. CF Industries' revenue fell 7% while gross and net profits plunged 18% and 22%, respectively, during the period. So did the company still deliver better than peers, which could have bid its shares up? Let's do a quick check.

If you compare the chart with the graph above, you'll realize that CF Industries was actually among the worst performers in the industry. Each of the companies has had to fight similar headwinds, especially low demand and prices of nutrients, which ate into their bottom lines. CVR Partners was an outlier for two reasons -- it specializes in a nutrient that commands premium prices, and it isn't affected by the volatility in prices of key nitrogen input, natural gas, since it uses petroleum coke instead. Otherwise, all the companies had a similar story to tell.

That still leaves us with the question: Why is the market excited about CF Industries? I believe it's because the company is growing leaner and stronger, and has even turned more shareholder-friendly lately. I'll explain how.

The moves that rocked the market
CF Industries specializes in nitrogen fertilizer, which is also the most widely applied nutrient, ahead of potash and phosphate. As a result, demand for nitrogen is relatively inelastic when compared to the other two nutrients, which bodes well for CF Industries. But you may want to ask: Then why hasn't the company's top line grown much? One answer is the persistent weakness in the phosphate industry.

Since CF Industries currently gets a little more than 15% sales from phosphate, weakening global demand for the nutrient proved a huge dampener, even offsetting strength in its nitrogen division. Small wonder, then, that the market applauded CF's decision to sell off its entire phosphate business to Mosaic for a cash consideration of $1.4 billion.

CF will become an all-nitrogen company once the deal is closed over the next few months. Meanwhile, CF is also expanding its exiting nitrogen plants to expand production capacity by 25% by 2016. With these moves, CF will ensure its leadership position in the nitrogen market for several years to come. And that's a pretty good reason to be excited about, especially when you know that you too could make money in the bargain.

Are you ready to cash in?
While it's too early to quantify shareholder gains out of CF's initiatives, one thing's certain: Investors can expect heavier dividend checks to reach their mailboxes. Let's do some quick math to see how much that could be.

CF Industries held $1.7 billion in cash as of Dec. 31, 2013. It is raising $1.5 billion in debt, and the deal with Mosaic should bring in $1 billion (after tax). The company expects to generate at least $4.3 billion in operating cash through 2016. Adding it all up, CF should have around $8.5 billion worth of cash to deploy by 2016. And that doesn't include any further potential debt issues or asset sale.

If we put aside roughly $2 billion of that cash for CF Industries' operating needs and $3 billion for its projected capital spending, that still leaves a good $3.5 billion worth of cash available for distribution to shareholders in the form of dividends or share repurchases.

Of course, how much operating cash CF Industries actually generates could change the whole equation. But given that it generated roughly $5.9 billion in operating cash over the past three years (which included a challenging year like 2013), it looks like CF has been conservative in its projections. So investors can remain hopeful.

The Foolish bottom line
CF Industries doesn't enjoy the attention that PotashCorp or Mosaic does, but the stock has clearly emerged a winner. The best part is that despite the recent price rally, CF shares are still the cheapest out there at under 11 times earnings. Has the stock just embarked on a fresh bull run? I'm not ruling that out.