Piyush Arora
(PiyushArora)
Author Bio
Piyush, an Electronics Engineer with an MBA in Finance, is continuously looking for discrepancies in market pricing. He likes to research tech stocks that incur minimal risks and offer healthy returns, over the short-medium term period.Follow @BuzzVestor

Big changes are under way in the mobile DRAM industry. LPDDR3 memory modules are gradually replacing mainstream LPDDR2 modules. In addition, Samsung (NASDAQOTH: SSNLF) and Micron (NASDAQ:MU) have developed their latest LPDDR4 modules for high-performance mobile devices. What does this technical jargon mean and how can you profit from it? Let's find out.

Necessary iterations
LPDDR, or low-power DDR, memory is designed to operate on low voltages to reduce the overall power consumption of mobile devices. Similar to its desktop counterparts, LPDDR memory has evolved from LPDDR1 to LPDDR2, LPDDR3, and eventually LPDDR4.

From the perspective of performance gains, LPDDR3 is about 60% faster than LPDDR2. When compared with LPDDR3 modules, LPDDR4 is about 50% faster, while consuming 40% less power. 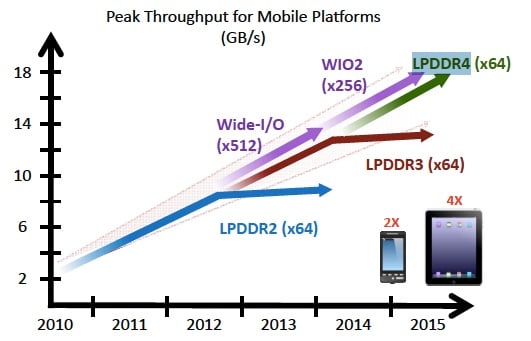 The need for the latest mobile DRAM modules is illustrated in the chart above. With each iteration of LPPDR memory, capable processors get access to a faster memory bus. This, in turn, allows mobile devices to render content at higher resolutions and access memory locations at a rapid rate.

The future of LPDDR memory
Speaking of deployment, Samsung's Galaxy S4 and Apple's (NASDAQ:AAPL) iPhone 5s are currently equipped with LPDDR3 modules. Heading into 2014, however, Samsung and Apple will reportedly equip their flagship devices -- the upcoming Galaxy S5 and iPhone 6, respectively -- with the next-generation LPDDR4 memory.

This move will enable both consumer goods giants to deliver unrivaled user experience, and consequently, contribute to expanding their market share.

Meanwhile, TrendForce estimates that LPDDR3 will replace LPDDR2 as the mainstream memory standard during 2014. With a major memory update on the cards, the research firm expects mobile DRAM shipments to exceed PC DRAM shipments in the current year. This suggests that leading mobile DRAM manufacturers can have a great year ahead.

Prime beneficiaries
Considering that Samsung is the largest DRAM manufacturer by market share, it stands to benefit greatly. The consumer goods giant unveiled the industry's first LPDDR4 memory modules in December last year, and shorty after, they were sent to programmers and software developers for rigorous testing and sampling purposes.

The company will unveil its Galaxy S5 on April 11, and going by the rumors, it might just be the first mass-produced smartphone to be equipped with LPDDR4 memory. With that, Samsung's mobile DRAM portfolio will consist LPDDR2, LPDDR3, and LPDDR4 modules.

Micron is another beneficiary here. The company acquired Elpida Memory last year, which strengthened its foothold in the mobile DRAM segment and brought valuable clients like Apple along. Investors should note that Apple uses about 80% of Elpida's installed DRAM manufacturing capacity, and it represents about 13% of Micron's net sales.

The pure-play memory manufacturer currently makes LPDDR2 and LPDDR3 modules and has sent its LPDDR4 modules for sampling. Considering that Apple is heavily reliant on Elpida Memory for its DRAM memory needs, Micron won't have to scout for willing buyers for its next-gen modules.

Foolish final thoughts
The mobile DRAM industry is expected to drive growth in overall DRAM shipments. So, it's a good strategy to invest in companies that have significant exposure to the mobile DRAM segment. Where Samsung offers diversified and balanced growth, Micron, being a pure-play memory manufacturer, tends to offer explosive returns.