Companies with excess cash should give it to their owners – you, the shareholders. One excellent way is through share repurchases. However, the investing constitution states that not all buybacks are created equal.

Good buybacks reduce share count. This spreads earnings over fewer shares. Assuming a static valuation multiple, fewer shares and higher earnings lead to stock gains. It's best if the buybacks are at low valuations, but if there really is no better use for the cash, buybacks sure beat the alternatives: 0.00001% short-term interest, say, or value-destroying acquisitions.

Here are five specialty retailers with a dependable history of paying you with buybacks:

A few important things stand out. First, share counts are, indeed, actually reduced. Each of these companies has a 10-year and 5-year history of buying back far more shares than options grants – they are not robbing Peter (shareholders) to pay Paul (executives). Believe me, this is not always the case.

Debt Isn't Bad
Second, total Debt/EBITDA. Debt is not bad; all debt is not created equal, either. Total debt-to-EBITDA is how many years a company could take to pay off its debt ignoring interest, taxes, depreciation and amortization (the first are two cash expenses, the latter two not). This may seem odd, but it's major for lenders, and you will often see in a company's SEC filings the details. Loans usually contain covenants requiring the company not exceed a particular debt to EBITDA ratio – coverage ratio – or all sorts of Bad Things happen. Things can get hairy for any company in the range of four times debt to EBITDA or higher. No worries though, because all of these companies are in fine shape.

Plus, it's actually smart to take on debt sometimes. If a company's shares are selling at enough of a discount to fair value, then low interest debt can be a very smart use of cash indeed. It certainly made sense at AutoZone, which bought back 66% of its diluted shares in 10 years. Using manageable debt, AutoZone has reduced its share count at a level we call a leveraged recapitalization, a type of special situation. The chart shows that the stock has increased over 1,500 % since buybacks began in 1999 , while net income has increased only 321 %. 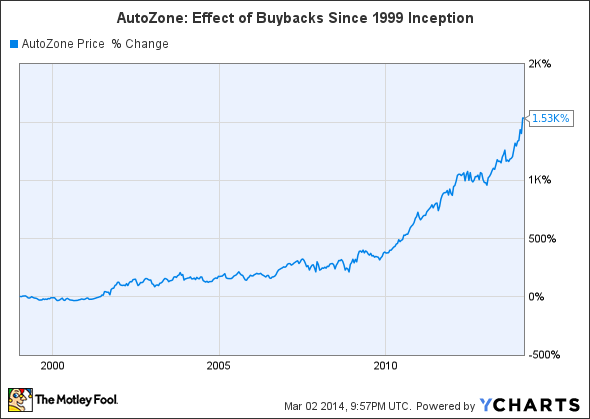 Thus the power of the leveraged recap in the right hands. And each of these companies could lever up substantially more, increasing buybacks as they borrow.

A caveat, and there is one
These companies are not cheaply valued today. Neither a plain vanilla value investor nor reasonable growth at a reasonable price investor would likely buy them. But there is a solution. If you have a long-term portfolio you want to invest conservatively, these are five strong candidates. That's especially true if held in a tax advantaged account such as an IRA, where the dividends are not taxed. And it would be smart to dollar-cost average –buy periodically over time – rather than plunk down cash all at once.

Past is not always prologue, but these companies have a commitment to buybacks through 10 years of thick and quite thin. But while these committed five may mint excess greenbacks that will vary over economic cycles. Today, for example, may be fair weather for Home Depot and Lowe's, but it hasn't always been nor always will be. When downcycling, specialty retail can be specialty travail. Periodic buying is the key.