Freddie Mac released its weekly update on national mortgage rates on Thursday morning. After seeing most rates fall a week ago, we're seeing them bouncing right back, yo-yo-like, this morning.

Both 30-year fixed-rate mortgages (FRMs) and 15-year FRMs spiked during the past week, with 30-year FRMs rising nine basis points to return to the 4.37% level of two weeks ago. Fifteen-year FRMs came within a single basis point of their two-week-ago level, rising six b.p. to 3.38%.

Additionally, 5/1 adjustable-rate mortgage (ARM) rates reacted even more abruptly, returning to levels last seen near the end of January, as they rose six basis points, to 3.09%. In contrast, one-year ARMs resumed a month-long trend of declines, falling four b.p. to land at 2.48%.

Freddie Mac vice president and chief economist Frank Nothaft pointed to February's above-estimates employment report of 175,000 jobs created in the month as one factor pushing rates upwards. Indicating a healthier economy, the employment number suggests more homebuyers may have paychecks coming in, with which to pay higher mortgage rates. Employment numbers for the previous two months were also revised upwards, by 25,000 jobs total.

Meanwhile, the unemployment rate rose to 6.7%. While this might sound like a negative development, it could actually indicate that more job seekers are returning to the market, temporarily unable to find work, but perhaps soon to do so -- if the jobs numbers continue to climb. 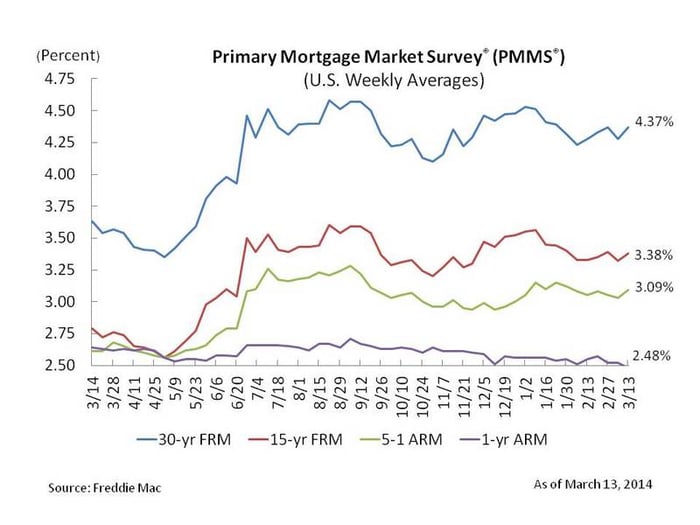