The FDA and the companies didn't provide investors with insight into what adverse events the FDA has noticed, nor did they indicate if the events were specific to one PCSK9 drug or another. That leaves investors with questions surrounding the compounds, which were previously thought to be potential blockbusters.

The news sent Regeneron's shares sharply lower; however, prices have bounced back as investors digested the report and considered that such neurological events may not mean an end for these cholesterol busting compounds. 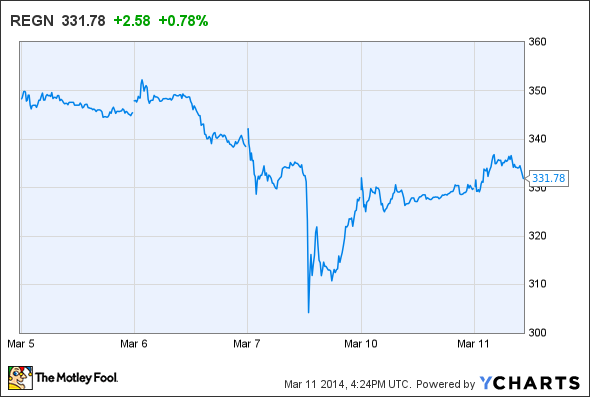 Targeting PCSK9 gene
It's been known for a while that patients possessing a mutation to the PCSK9 gene causing it to over-produce a protein responsible for moderating cholesterol are associated with high bad cholesterol levels.

Specifically, the protein produced by PCSK9 controls the number of LDL receptors on cells that are responsible for removing LDL from the bloodstream. That means if PCSK9 expression is limited, more receptors are present, and LDL levels drop.

That knowledge has prompted a wave of research into creating drugs that will mimic the mutation for under-expression. Regeneron, its partner Sanofi (NASDAQ:SNY), and Amgen have been among the leaders advancing such research, but Pfizer isn't far behind.

Why there has been so much excitement over PCSK9
Statins have been used for years to lower cholesterol, but statins don't work for everyone. Additionally, it's been shown that statins increase PCSK9 expression, which reduces statin effectiveness. That suggests that PCSK9 drugs, used alongside statins, could enhance statin efficacy.

Statins came onto the scene in the 1990's. They help control production of cholesterol in the liver, an organ responsible for up to 70% of the body's cholesterol production. The group of drugs became widely prescribed by doctors seeking to reduce arterial blockages, lowering the chance of stroke or heart attack.

On average, drugs in the statins class lowered LDL cholesterol by 1.8 mmol/l in trials, translating into a 60% reduction in the risk of heart disease and an estimated 17% reduced risk of stroke.

As a result of their widespread use, statins became some of the industry's best sellers, creating a market worth $20 billion in 2005. Pfizer's Lipitor was the best selling drug in the group for years, generating $125 billion in sales for the company between 1997 and 2011.

The ability to improve statin efficacy and the blockbuster potential from treating cardiovascular disease suggests the use of PCSK9 inhibiting drugs could be similarly high.

A higher hurdle
The FDA's splash of cold water defuses some of the excitement surrounding PCSK9, but it doesn't necessarily mean an end to PCSK9 hopefuls.

Regeneron, Sanofi, Amgen, and Pfizer hope that's the case because they've bet big that their drugs can win FDA approval.

Regeneron and Sanofi are studying their drug alirocumab in a series of 12 trials. Amgen, which has stated it still plans to file its AMG-145 PCSK9 drug with the FDA for approval this year, has 13 studies ongoing. And Pfizer's plans for RN316 include studying it in 22,000 patients.

Fool-worthy final thoughts
No one is discussing publicly the specific details surrounding the neurocognitive events outlined by the FDA. However, in a filing disclosing the FDA's concerns, Sanofi reported it's unaware of any such neurocognitive events in its trials. But that doesn't necessarily mean it's in the clear, after all the study wasn't designed to look for such events. Neither were the studies by Amgen and Pfizer.

That has the FDA asking all the companies to start digging into their data, suggesting that such digging may unearth those events later. The FDA could also create additional barriers to the drugs, including asking for additional trials specifically looking at neurocognitive events, or if approved, a more restrictive label than otherwise hoped. However, that doesn't mean investors need to panic, yet. After all, the FDA has found that the use of statins can cause neurological events including memory loss, forgetfulness, and confusion. We don't know if the PCSK9 events are similar to statins, though, which means investors should stay tuned.