So far in March, fuel cell companies have been part of the stock market news almost every day. Plug Power (NASDAQ:PLUG) shares rocketed 91% as the company signed orders with some big-name clients and announced that it sees growth in the future. So what does this have to do you and your investment strategy? Read on to find out more.

Plug Power's price momentum continued into 2014 after the company signed a small pilot-project contract with Fedex in January, causing its stock price to jump 45%. The stock's growth continued this year and is now up 416% year to date since the company expanded its contract with Wal-Mart in March. The fervor surrounding it has pulled in fellow fuel cell companies Ballard Power Systems (NASDAQ:BLDP) and FuelCell Energy (NASDAQ:FCEL), which have followed it upward, gaining 295% and 136%, respectively, so far this year. While Ballard Power Systems is related -- it makes the fuel cells that Plug Power uses in its products -- FuelCell energy operates in a different business line, selling its fuel cells as part of large installations for power plants.

Plug Power reported its earnings this week and hopes these deals and others it will sign will enable the company to report $150 million in orders for 2014 and reach EBITDA breakeven by the third quarter of 2014. Beyond that, CEO Andy Marsh says, "Although a lot has happened since our last call, I am more bullish than ever that Plug Power is moving into a rapid-growth cycle."

Given several daily price moves of 20% to 50%, the media coverage has really taken off in the past two weeks. 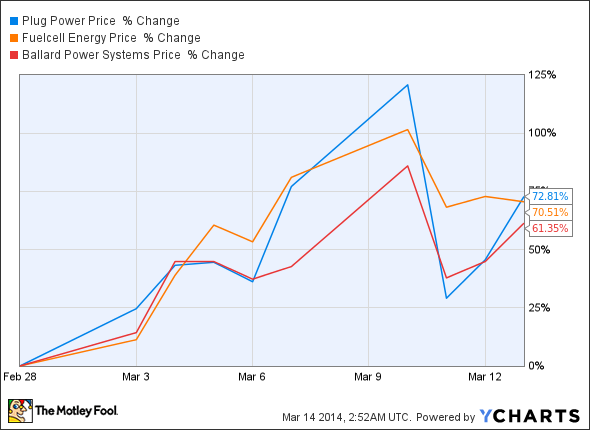 There were two hiccups in Plug Power's recent ascent. The first was when the company announced on March 6 that it would sell 3.9 million shares at $5.75 -- a 15% discount to the stock price -- for $22.5 million. The second hiccup was when Citron Research released a report calling Plug Power a "casino stock" and set a valuation of $0.50 for the stock, saying the company does not have significant intellectual property, has missed its own guidance by massive amounts for each of the past four years, is dependent on the government continuing tax credits for renewable energy, and sold 75 million shares in 2013 at an average price of $0.27, with company executives not meaningfully participating.

Despite this, the media coverage has continued unabated. Some headlines:

So what does this have to do with your investment strategy?
Absolutely nothing. While traders with momentum strategies might find Plug Power appealing, any investor with a long-term horizon and a solid investing strategy should easily filter out Plug Power into their "too many red flags" pile.

We are bombarded by information every day. The key for investors is to know what is important and what you can ignore. Most stock market news is just noise. To quickly filter out the noise, you need to know your investment strategy, focus on where you see repeatable opportunity, continue learning, and invest for the long term.