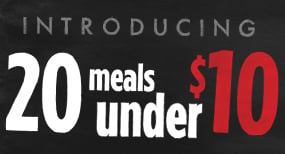 She has gone from an unknown to a legend in a matter of two years. How does one reach such status in this time-frame? By writing Olive Garden and Ruby Tuesday (NYSE:RT) restaurant reviews for the Grand Forks Herald, of course.

It doesn't matter who wrote a restaurant review when it goes viral. With millions of people reading these reviews, a positive or negative opinion will have at least a small impact on a restaurant's reputation and sales. However, will Hagerty's reviews be enough to give Ruby Tuesday at least a little much-needed life?

Critical opinions
Back in 2012, Hagerty wrote about Darden Restaurants' (NYSE:DRI) Olive Garden in her Eatbeat column. She referred to Olive Garden as "fashioned in Tuscan farmhouse style with a welcoming entryway" and stated that "the Chicken Alfredo ($10.95) was warm and comforting on a cold day." Many snooty food critics attacked Hagerty for her review. However, she was simply doing the same job she had done for three decades, and not looking for anything extra out of it. Her simple opinions resonated well with many people.

More recently, Hagerty reviewed Ruby Tuesday, and her review went viral. Ruby Tuesday needs more of a boost now than Olive Garden did back in 2012.

She visited Ruby Tuesday twice. She enjoyed the salad bar's great taste and good nutrition on her first visit. She also enjoyed the very hot, well-seasoned Baked Ravioli on her second visit. Readers get a kick out of her unintended humor, such as her appreciation for Ruby Tuesday's cloth-like napkins wrapped around silverware. This is exactly what leads to her restaurant reviews going viral, which then increases brand recognition for struggling restaurants like Ruby Tuesday. However, it's not likely that this brave and crafty senior citizen will have any long-term impact on Ruby Tuesday.

A few important numbers explain why.

Weak demand
Same-store sales, or comps, exclude new restaurant openings over the past year. Therefore, they provide a better way to see the demand picture than revenue does.

On a year-over-year basis in the second quarter, comps declined 7.8% at company-owned restaurants and 5.3% at franchise restaurants. Furthermore, guest counts declined 6.3%. Ruby Tuesday will point to this as a sequential improvement over the first quarter when guest counts slipped 10.8%. However, terrible to bad still isn't good.

Ruby Tuesday has added pretzel burgers, flatbreads, and hand-breaded chicken tenders to its menu. Changing menu items gives Ruby Tuesday potential, but the biggest headwind for casual dining is the value-conscious consumer. Therefore, price points must be on the money, which isn't easy.

For the second quarter, the net loss came in at $34.7 million versus a loss of $4.2 million in the year-ago quarter. Ruby Tuesday plans on cutting costs, but that's a broad statement and it's easier said than done.

An aging brand
Ruby Tuesday is an old brand, at least in consumers' eyes. Casual dining isn't what it used to be, and Ruby Tuesday doesn't offer diversification like that of some of its peers. For instance, Darden owns several brands which include Olive Garden, LongHorn Steakhouse, The Capital Grille, Bahama Breeze, Seasons 52, Eddie V's Prime Seafood, and Wildfish Seafood Grille. While DineEquity (NYSE:DIN) only owns Applebee's and IHOP, this at least gives the company more room for maneuverability with marketing and innovation.

The Foolish takeaway
Ruby Tuesday might be a turnaround story, but why take the chance? Investors are likely to be much safer in Darden and DineEquity. If you're looking for a restaurant that's growing, then you should strongly consider looking in the fast-casual space, not in casual dining.

Unfortunately for Ruby Tuesday, Marilyn Hagerty's reviews aren't going to change consumers' minds. The majority of them want fast-casual, which offers clean and comfortable atmospheres, higher-quality food than fast-food, and more affordable prices than casual dining. Please do your own research prior to making any investment decisions.