This Big Oil company made a Big Blunder – and Uncle Sam isn't happy.

BP Plc ( BP 0.77% ) can't catch a break. The oil company used to be the Pentagon's biggest fuel supplier, but a contract freeze following the Deepwater Horizon oil spill has pushed BP Plc's government earnings into the red. Will Uncle Sam ever forgive?

Government contracts are traditionally viewed as some of the steadiest, most lucrative earnings around – not so for BP PLC. After the U.S. government banned BP Plc from new federal contracts in November 2012 for its "lack of business integrity" in the days, weeks, and months after the Deepwater Horizon disaster, the oil company is still in timeout .

According to Bloomberg calculations, BP Plc's contract earnings went from $2.51 billion profit in fiscal 2012 to a net loss of $654 million this last fiscal year . That's a $3.2 billion blunder.

Add that to the $26 billion BP Plc has already paid in claims, clean-up, and restoration, plus an estimated $1.4 billion in extra claim costs following a federal appeals rejection last week that keeps the company on the hook...and you're left with $30.6 billion. 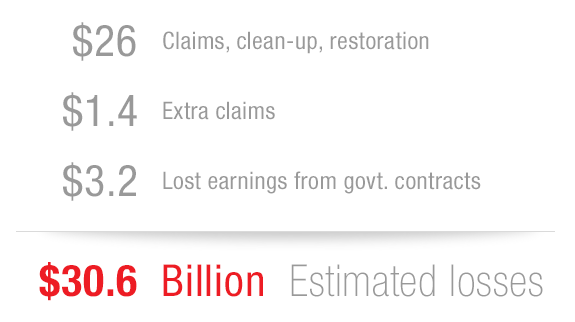 BP Plc is fed up with being the blunt of everyone's joke. It sued the U.S. EPA last August to have its suspension removed – to no avail. BP Plc spokesman Geoff Morrell told Bloomberg that the EPA's rulings are "arbitrary and capricious ."

At the same time, the company has attempted to rally public support for putting an end to questionable claims. Leading up to the federal appeals court failure to cut down on extra claims, the corporation pushed out full-page advertisements in The Wall Street Journal, The New York Times, and the Washington Post depicting alleged settlement abuses: 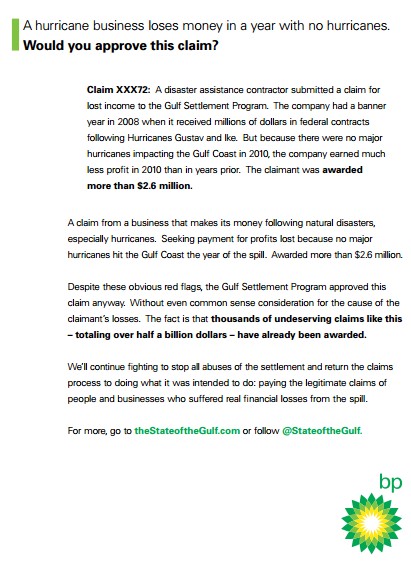 BP Plc wants to move on – and it's not the only one. It's safe to say that most (if not all) BP Plc shareholders don't want their company to be a scapegoat – or, worse yet, an enduring example of a company that can never quite recover.

Unfortunately, there aren't any rules to follow in this billion dollar battle. But despite the lack of precedent, the U.S. government seems to have no qualms with setting a sharp one.

The Deepwater Horizon disaster spilled 4 million barrels of oil into the Gulf of Mexico and took 11 lives – that makes it the worst offshore disaster in the United States – ever . In a filing on the continued contract freeze, the Justice Department noted that the EPA was "wholly reasonable" in its conclusion that the oil company's "latest round of plans and promises is insufficient to demonstrate that BP is a responsible federal contractor ."

Despite the Deepwater disaster, BP Plc will live to see another day. Even as costs keep pushing higher, this multinational isn't about go bust. The company's $388.3 billion in revenue for fiscal 2013 makes it the sixth largest corporation in the world. And with $11.6 billion in profit for the same period – going into the red for government contracts doesn't mean it's a goner .

The U.S. government doesn't want to gut BP Plc – but it does want to make it known that major mistakes will result in major punishments. Big Oil, you've been warned.