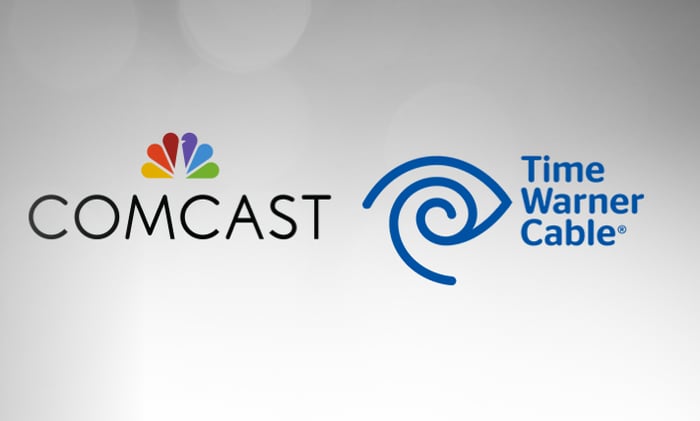 The war for the Internet has never been hotter. The agreed upon merger of Comcast (NASDAQ: CMCSK) and Time Warner Cable is just one of the huge stories that has dominated the news cycle in recent weeks. Verizon's (NYSE: VZ) ongoing feud with Netflix (NASDAQ: NFLX) has been heating up alongside claims that the communications company is throttling data transfers from the video-streaming giant. Making the picture even more hectic, Google (NASDAQ:GOOGL) looks to be expanding its Fiber ventures as a reaction to power grabs from the titans of telecom. In many respects, there has never been a more pivotal moment in the information age.

The beginning of the end
2014 kicked off with an appeals court ruling that dealt a tremendous blow to the net neutrality movement supported by companies like Google and Netflix and opposed by telecom companies and mobile carriers. Verizon received a favorable ruling in its case against the FCC, successfully abolishing the Open Internet Order and instantaneously reworking the fundamental principles that govern the web. ISPs are now able to block user access to sites as they see fit and regulate the speed at which users access materials online.

A merger for the ages
The effects of the $45 billion Comcast-Time Warner merger are bound to trickle down to multiple industries. If the deal goes through, it looks to spur a series of negotiations between all manner of cable companies and the FCC and other government divisions. It will also mean big things for the future of digital content distribution. The end of net neutrality and the consolidation of power in telecom has substantially altered the dynamics between content providers and ISPs.

Netflix has already struck a new deal with Comcast to ensure that its users have quality access to its streams. Comcast has also blocked access to the recently released HBOGO app on Sony's PlayStation 3 gaming console.

Busting a cap
The announcement of a plan to merge the two biggest telecom providers in America came on the heels of the news that Comcast was slowly expanding data cap trials in cities like Memphis and Atlanta. Affected subscribers are subject to a 300 gigabyte monthly limit, with $10 charged for the use of each additional 50 gigabytes. Time Warner Cable subscribers are currently shielded from data usage caps, but the completion of the merger with Comcast would almost certainly see new customers introduced to "trials." These types of usage restrictions could be used to deter those who might seek to cut the cord.

Anticompetitive, pro-consumer, or both?
It's hard to imagine a Comcast-Warner merger being good for competition and the advancement of the Internet, but some are saying that may very well be the case. The deal, which will have to be defended from claims of "Monopoly" in an antitrust case, could spur competitors to improve their offerings and trigger a favorable reworking of FCC standards.

Is fiber the future?
Following the announcement of the potential megamerger, Google revealed plans to expand its Fiber offerings. The company will bring its ultra-fast Internet to 34 new cities, including some that are subject to Comcast's data cap trials.

There are territorial deals in place that make expanding Fiber difficult, but the service provides an increasing foothold in a sector where Google needs to have influence. The YouTube platform will be essential for the 4K push that will eventually make its way to gaming. Fifteen years after the company's founding, Google is still the future of the Internet.

Google debuts new ISP rating system
Google's YouTube platform will be one of the most important factors in shaping the future of the Internet. YouTube and Netflix are said to account for half of North American peak Internet traffic, and Google's video streaming service is still growing at a rapid clip. The rising prominence of the video site has continued despite issues with buffering and picture quality, with both Google and the ISPs blaming the opposite party for where the root of these problems lies.

Now, the blame game is escalating with the introduction of Google's new rating scale that grades ISPs based on YouTube performance. Those that meet Google's newly established criteria will receive the prize of being "YouTube HD Verified."

A series of interconnected power grabs
2014 isn't even a quarter over, but it is already certain to go down as one of the most important and transformative years in the history of the Internet. The rules of The Information Age are shifting rapidly and the companies at its forefront are scrambling to ensure that they receive favorable tilts amid shifting balances of power. The floodgates have been opened. By the end of the year, the big stories currently making waves could be summed up as little more than a trickle.